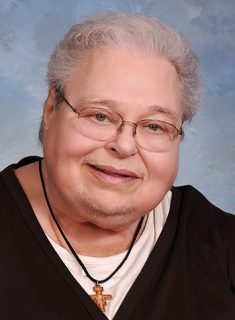 Sister Catherine Therese Keller, O.S.F., 81, died Dec. 24 in Assisi House, Aston. She had been a professed member of the Sisters of St. Francis of Philadelphia for 60 years.

Mary Elizabeth Keller was born in Reading, Pa. and entered the congregation in 1957. She professed her first vows in 1960 and took the name Sister Catherine Therese.

She later earned a BA in English from Neumann University and an MA in education from Providence College in Rhode Island. She ministered primarily in education as both teacher and principal.

She also ministered for five years in the Archdiocese of Mobile.

During her 27 years of ministry in the Archdiocese of Philadelphia, Sister Catherine Therese served on the clerical staff at Neumann University and volunteered at Immaculate Mary Home. In 1988 she moved to Assisi House where she served in prayer and hospitality ministry until her death.

The funeral Mass was celebrated privately Dec. 30 at Assisi House followed by burial in Our Lady of Angels Cemetery in Aston. Sister Catherine Therese is survived her Franciscan family. Donations in her name can be made to the Sisters of St. Francis Foundation, 609 S. Convent Road, Aston, PA 19014.