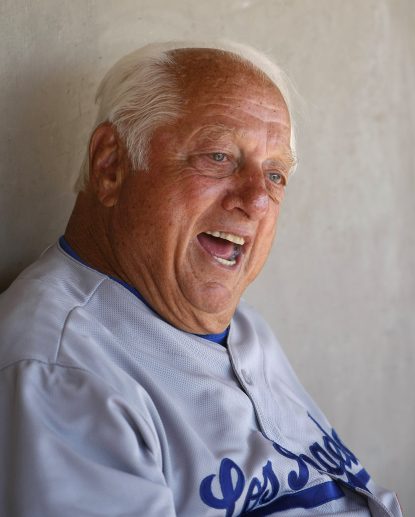 WASHINGTON (CNS) — Tommy Lasorda, who won two World Series titles during his 21-year managerial reign with the Los Angeles Dodgers and became an ambassador for baseball in retirement from the sport, died Jan. 7 in Los Angeles at age 93.

Lasorda, a Catholic, died at a Los Angeles hospital an hour after suffering cardiopulmonary arrest at his home. He was inducted in 1997 to the Baseball Hall of Fame, the year after his retirement as manager, but he wasn’t done as a skipper, leading the U.S. men’s baseball team to a gold medal in the 2000 Summer Olympics in Sydney.

As a pitcher, Lasorda’s baseball career didn’t amount to much — an 0-4 career record with a 6.48 ERA over 58.1 innings playing two seasons with the Brooklyn Dodgers and one with the Kansas City Athletics — but as a manager he shone, winning four National League pennants and winning 1,599 games, all with the Los Angeles Dodgers.

He grew up in the Philadelphia suburb of Norristown, Pennsylvania, where he attended an Italian parish, Holy Savior. In a 1989 interview, Lasorda said: “We were so poor, I wore shoes with soles so thin I could step on a coin and tell whether it was heads or tails.”

But Lasorda said on repeated occasions, “I’m proud to be a Catholic,” and pitched in to help numerous charitable endeavors.

In 1989, he learned that the Sisters of Mercy in Nashville, Tennessee, needed financial support for a new convent. “They have dedicated their life to God so we need to give something back; everyone thinks Rome pays for these things,” Lasorda said.

The year after the Dodgers’ breathtaking upset win over the Oakland Athletics in the 1988 World Series, Lasorda, who said he had not stepped on a scale in eight years, weighed in at 218. He pledged to get down to 190, and collected $50,000 in pledges for the convent.

He was aided by two of his stars, pitcher Orel Hershiser and outfielder Kirk Gibson, each of whom promised to contribute $10,000 if he lost 20 pounds, and then added to their pledge the other eight — which Lasorda accomplished.

“We can’t do enough for education in this country — all the way up through college,” said Lasorda, who addressed numerous Catholic organizations and diocesan events around the country, in a 2001 interview. 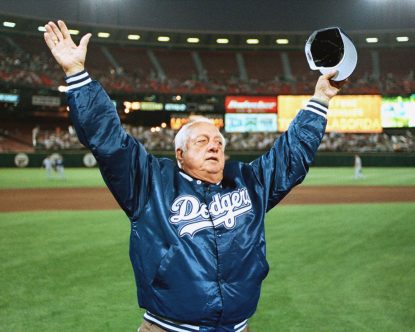 In 1994, when the Dodgers were still conducting spring training in Vero Beach, Florida, Lasorda emceed a dinner to benefit the St. Joseph School Foundation in Lakeland, Florida, the spring training home of the Detroit Tigers, which coincided with Detroit manager Sparky Anderson’s 60th birthday. At the dinner, Anderson, himself a Hall of Fame Catholic skipper, received a baseball autographed to him by St. John Paul II.

In a 1994 interview, Jim Leyland, then the manager of the Pittsburgh Pirates whose brother is a priest in Ohio, said he admired fellow Catholics Lasorda and Anderson most of all. They “have been successful for so long because they could adjust to the changes in the game,” Leyland said.

In 1985, Lasorda worked with Dodgers owner Peter O’Malley to help Carmelite sisters in Guerra, Dominican Republic, where the Dodgers had set up a development camp for promising Dominican ballplayers.

Lasorda and Cuban-born Dodgers super scout Ralph Avila rented a house where the Carmelites began to teach their first class of 35 children in 1985. Later, Lasorda bought them a bus. By the turn of the century, the Programa Comunitario Futuro Vivo school had room for 600 youths in vocational training and computer classes, with six students having gone on to join religious communities.

At a 1995 testimonial dinner in Philadelphia, Lasorda called his Catholic faith “very, very important, something I believe in strongly but don’t try to force on others.”

“I love my faith,” he said. “I practice my faith. It’s helped me a great deal throughout my lifetime.” 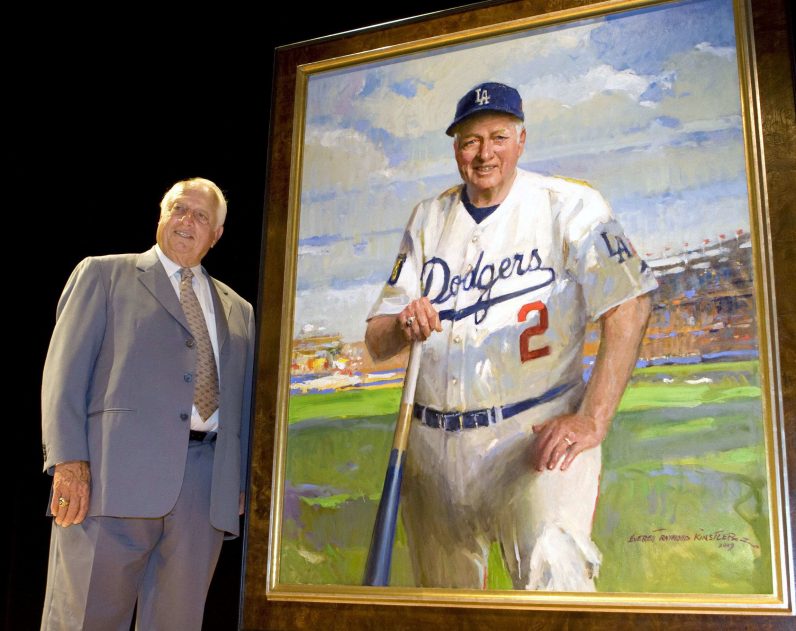 Hall of Fame Los Angeles Dodgers manager Tommy Lasorda stands next to his portrait before it is hung at the National Portrait Gallery in Washington Sept. 22, 2009. Lasorda, a Catholic, who led the Dodgers from 1976 to 1996, winning two World Series titles, four National League pennants and eight division crowns, died Jan. 8, 2021, at age 93. (CNS photo/Larry Downing, Reuters)