Despite hardships, pope says there is much for which to be thankful 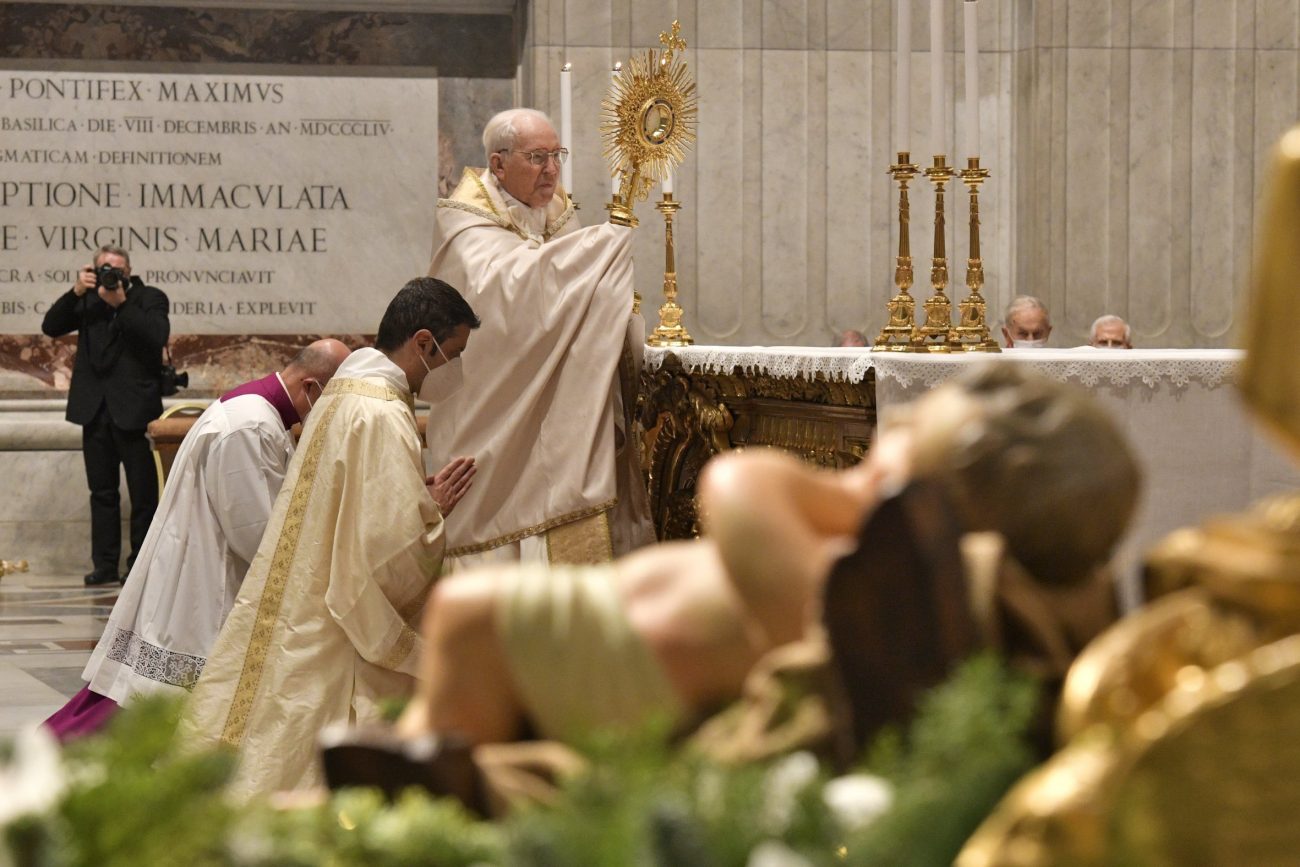 Cardinal Giovanni Battista Re, dean of the College of Cardinals, holds a monstrance as he leads a New Year's Eve evening prayer and the singing of the "Te Deum" to thank God for the year that is ending. The Vatican announced earlier in the day that Pope Francis, 84, would not preside over the celebration in St. Peter's Basilica due to "painful sciatica." (CNS photo/Vatican Media)

(CNS) — The notable absence of Pope Francis at the final liturgical celebration of 2020 in St. Peter’s Basilica capped off a difficult year for the Vatican and for the world.

Yet Pope Francis, in remarks read by Cardinal Giovanni Battista Re, dean of the College of Cardinals, urged people to find meaning in the pandemic.

The pope said giving thanks to God after such a year may seem “forced, almost jarring” especially for those who have lost loved ones, have fallen ill or have lost their jobs.

“At times, someone may ask, ‘What is the meaning of such tragedy?’ We must not be in a hurry to answer this question. To our most anguished ‘whys,’ not even God responds by appealing to higher reasons,” the pope wrote.

God, he continued, is not someone “who would sacrifice human beings for a grand design,” but instead a compassionate and paternal shepherd.

“God is a shepherd, and what shepherd would give up even one sheep, thinking that in the meantime he has many others left? No, this cynical and ruthless god does not exist. This is not the God we ‘praise’ and ‘proclaim Lord,'” Cardinal Re read.

Christians, the pope wrote, can find meaning in the example of the Good Samaritan, who was moved by compassion to care for the stranger.

“Here, perhaps we can find ‘meaning’ to the tragedy of this pandemic, like other scourges that strike humanity: that of awakening in us compassion and provoking attitudes and gestures of closeness, of care, of solidarity,” the cardinal read.

Earlier in the day, Vatican spokesman Matteo Bruni said Pope Francis, 84, would not preside over the traditional end-of-the-year prayer service nor the New Year’s Mass the following day due to “painful sciatica.”

However, Bruni confirmed that “Pope Francis will still lead the recitation of the Angelus from the library of the Apostolic Palace, as scheduled” Jan. 1.

An estimated 150 faithful, as well as 25 cardinals, attended the Dec. 31 prayer service at the Altar of the Chair in St. Peter’s Basilica. The service began with the prayer of vespers on the eve of the feast of Mary, Mother of God.

The faithful were accompanied by the serene sounds of the Sistine Chapel Choir filling the centuries-old basilica with music in Latin and Italian. The liturgy included the singing of the “Te Deum” (“We praise you, oh God”) in thanksgiving for the blessings of the past year, as well as eucharistic adoration and benediction.

Reading the pope’s prepared homily, Cardinal Re said that, despite the hardships endured throughout the year, Christians should give thanks to God for the good things that have happened and for the many people who, “without making a sound, have tried to make the burden of this trial more bearable.”

Doctors, nurses and volunteer health care workers, as well as priests and religious men and women, should always be “in our prayers and deserve our gratitude,” the pope wrote.

He also expressed gratitude for “all those who strive each day to maintain their families and their service to the common good in the best possible way.”

“We are thinking in particular of school administrators and teachers, who play an essential role in society and who must deal with a very complex situation,” Cardinal Re read. “We also think with gratitude of the public administrators who know how to make the most of all the good resources present in the city and in the territory, who are detached from private interests and even from those of their party, who truly seek the common good, beginning with the most disadvantaged.”

Concluding his reading of the pope’s homily, Cardinal Re said that all those who placed the needs of others before themselves are “driven by God’s strength, which is more powerful than our selfishness.”

“This is why we give praise to (God), because we believe and know that all the good that is accomplished day by day on earth comes, in the end, from him,” he read. “And looking to the future that awaits us, we again implore: ‘May your mercy be with us always, in you we have hoped.'”

PREVIOUS: In new year, share the blessing of your time, Pope Francis writes