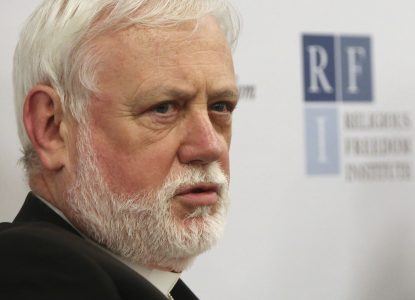 VATICAN CITY (CNS) — With a number of nations considering some form of a “Green New Deal” for reducing greenhouse gas emissions, it is important that these efforts respect diverse cultures and economic policies, and avoid imposing a “uniform” model that ends up causing division, said Archbishop Paul R. Gallagher, the Vatican’s foreign minister.

Current political debates about the issue seem, on the one hand, “to lead to a discordance of opinions and, on the other, favor imposing that singular cultural model” that “unifies the world, but divides persons and nations,” he said Jan. 23.

It is important that promoting human and social development and well-being also includes “the defense and care of culture, especially if we feel it as an indispensable instrument for understanding the world and for seeking the common good,” he said.

The archbishop spoke during a daylong course Jan. 23 sponsored by the Centesimus Annus pro Pontifice Foundation, which seeks to implement the teaching of St. John Paul II’s 1991 encyclical on social and economic justice.

The foundation’s monthly series of speakers and lectures will focus this semester on “The Church’s Social Doctrine for a Green New Deal,” and Archbishop Gallagher’s lecture Jan. 23 looked at how the church’s social doctrine related to Green New Deal proposals and to discerning the common good.

In his talk in Italian, the archbishop noted the various Green New Deal proposals being looked at by the United States, the European Union and the World Economic Forum, among others.

In fact, many of the programs “do not call into question either the industrial system, which historically is the source of pollution, or the financial (system) of the international markets,” but are actually programs that tend to respond to existing economic trends with industrial solutions, he said.

“We also understand that improvements in the scientific and technological fields help us to reduce the very serious environmental problems that afflict the world,” he said. “However, we can never be credible environmentalists without a critical eye on the modern idea of progress understood as a reassuring linear progression of human possibilities by way of unlimited technological advancement.”

Any culture that imagines the things humanity can produce will be the best solution or will save the world, he said, will end up “destroying mankind and its environment.”

For the Catholic Church, the archbishop said, humanity is asked to care for creation for the common good, showing there is an inextricable link between natural law and the social order and harmony, between creation and morality, between environmental resources and the responsibility of the human family.

“The rule for the relationship between human beings and nature, therefore, is not the pursuit of profit, but the pursuit of the common good through the reasons of faith,” the archbishop said.

It would be a mistake, however, to reduce the economic and social teachings of the church to “a generic invitation to deference toward the values of freedom and social justice because, as Christians, we are called to charity and universal fraternity as a joyous observance of God’s will,” he added.

While many Green New Deals being looked at represent the hope for a historical change of course for a better future, he said, there is also a focus on “certain themes that seem to narrow rather than broaden environmental reflection,” thereby risking an environmentalism that becomes “uniform and even.”

He said Pope Francis highlighted a similar tendency in his encyclical “Fratelli Tutti” when he wrote, “Local conflicts and disregard for the common good are exploited by the global economy in order to impose a single cultural model. This culture unifies the world, but divides persons and nations, for ‘as society becomes ever more globalized, it makes us neighbors, but does not make us brothers.'”

That is why, the archbishop said, he proposed people do their utmost to safeguard and promote the wealth of human cultures that have a role to play in promoting the common good.

The church, which yearns for world peace and fraternity, strongly supports “an environmentalism that is healthy, profound and respectful of the human being,” he said.

He asked people to make a commitment to “constructive dialogue” that includes all sides, including the Christian perspective, which emphasizes the desire to help people open their hearts to God who creates all things and who teaches to take care of the human family and the world it lives in.