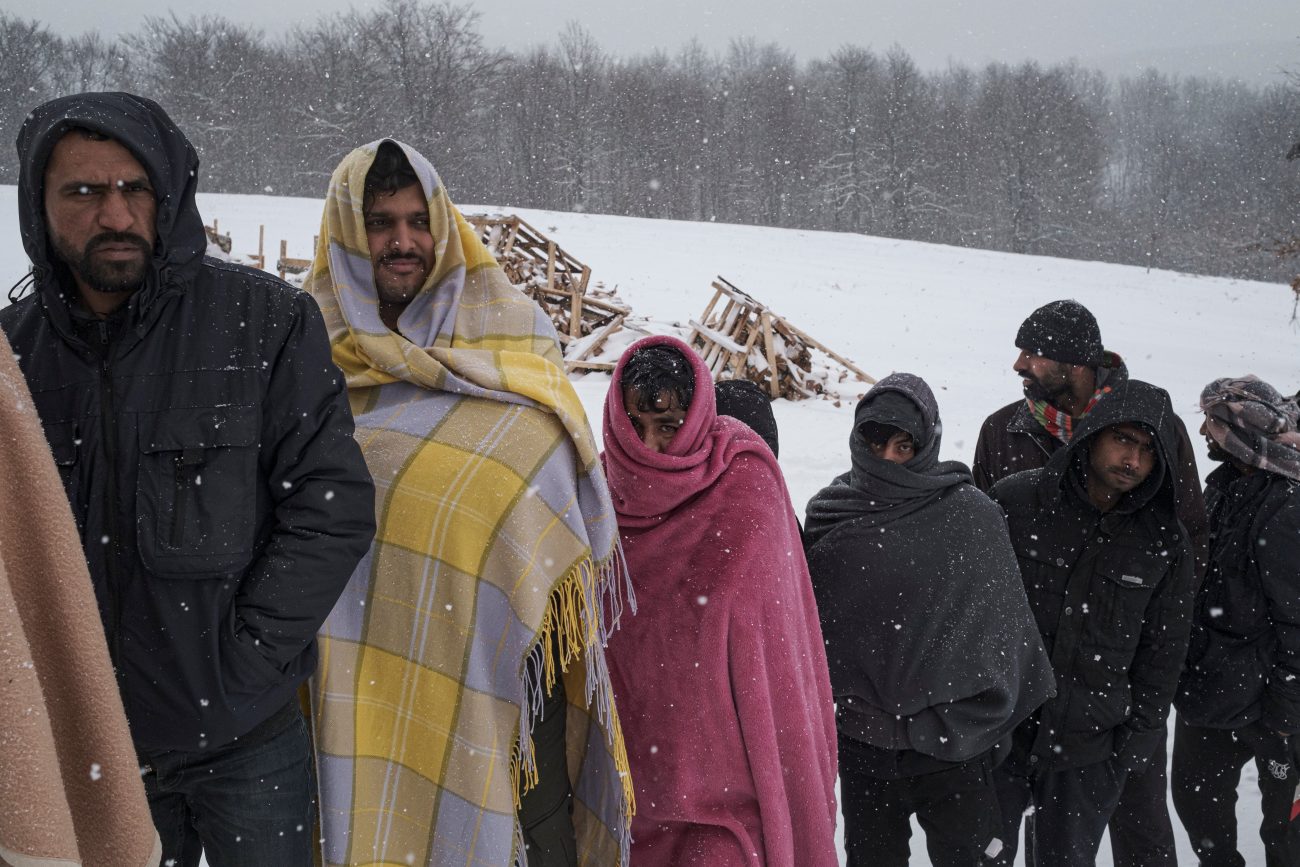 Men stand in line near the burned migrant center "Lipa" waiting for food in Bihac, Bosnia-Herzegovina, Jan. 11, 2021. More than a thousand migrants from Asia, the Middle East and North Africa were left to sleep in the cold after their camp in northwestern Bosnia burned down Dec. 23 amid a dispute among Bosnian politicians over where to house them. (CNS photo/Marko Djurica, Reuters)

VATICAN CITY (CNS) — Human rights organizations have called on the European Union to intervene in Bosnia-Herzegovina, where over 1,000 migrants have been stranded in sub-zero temperatures awaiting relocation after their camp burned down.

In a joint statement released Jan. 12, Amnesty International, Jesuit Refugee Service Europe, Doctors of the World Belgium and Refugee Rights Europe also called on authorities in Bosnia-Herzegovina to “comply with its international obligations and enforce its own laws, including taking full responsibility for securing and managing accommodation and protection of people in need and developing an effective asylum system.”

“Without systemic and durable solutions that also aimed to place Bosnia and Herzegovina authorities in the driving seat, humanitarian crises of the kind witnessed over the Christmas holidays have become a recurring and unavoidable occurrence every winter,” the organizations said.

A large fire broke out Dec. 23 at the Lipa camp in Bihac, located near the country’s border with Croatia. According to Peter Van der Auweraert, the U.N. International Organization for Migration’s chief of mission in Bosnia- Herzegovina, the camp “was built earlier this year in response to over-crowding and unsuitable conditions elsewhere.”

The fire broke out while residents were being evacuated after the camp was closed.

“For several reasons, mostly political, it never got connected to the main water or electricity supply, and was never winterized. And now, with this fire, it never will be,” he said in a Dec. 23 statement.

According to the Associated Press, Bosnian authorities sent military officers to set up tents after the country faced criticism for its slow response in aiding the migrants, many of whom were forced to build campfires and lacked proper clothing to protect them from the harsh winter weather.

“As the situation in Bosnia-Herzegovina is a direct consequence of the EU’s migration and asylum policy that protects external borders and shifts responsibility for ensuring protection of migrants and asylum-seekers to the neighboring countries, the EU has a responsibility toward Bosnia and Herzegovina,” the statement read.

Although authorities have now installed 20 heated tents, “over 350 people remain in makeshift tents,” the organizations said.

“With international organizations, including International Organization for Migration, stepping in to fill the gap year after year, the informal arrangements for managing accommodation facilities between the authorities and humanitarian organizations have blurred individual responsibility and reduced any real accountability,” the statement read.

Although Bosnia-Herzegovina is not a member country, the European Union has a responsibility to provide support to neighboring countries where migrants are stranded “as a result of the EU’s containment measures and restrictive migration policies,” the organizations said.

“As long as safe and legal pathways are not provided, the rights of migrants and refugees will continue to be violated,” the statement read.