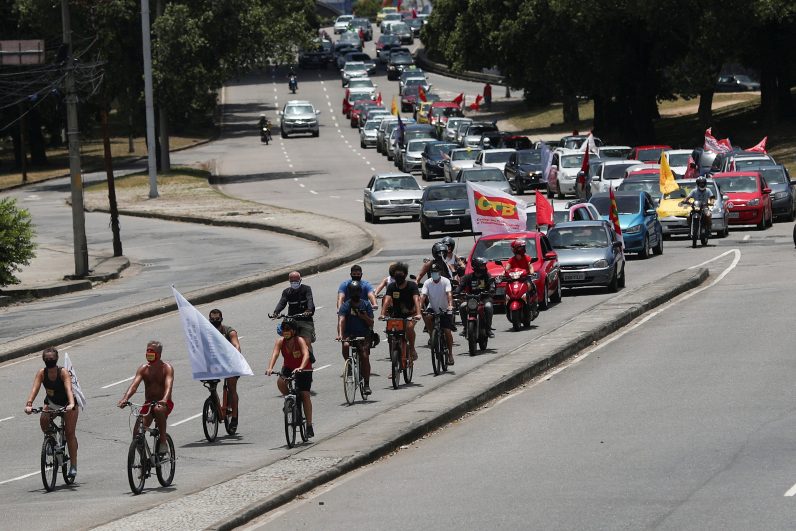 People in cars and on bicycles demonstrate against Brazilian President Jair Bolsonaro and his handling of the COVID-19 pandemic, in Rio de Janeiro Jan. 23, 2021. Nearly 400 Brazilian religious leaders, including many prominent Catholics, have asked the Chamber of Deputies to impeach Bolsonaro. (CNS photo/Ricardo Moraes, Reuters)

SAO PAULO (CNS) — Stating that Brazil’s federal government displayed contempt for protecting the health of the population and showed criminal conduct, 380 Brazilian Christian religious leaders filed an impeachment request against President Jair Bolsonaro for the crime of shirking his responsibilities.

“Faced with the most serious public health crisis in the history of the country and the planet, the president of the republic, irresponsibly, oscillated between denialism, contempt and assumed sabotage of the prevention and health care policies of Brazilian citizens,” read part of the document presented to Brazil’s Chamber of Deputies Jan. 26.

According to the document, since the beginning of the pandemic, Bolsonaro has sought to discredit renowned national scientific institutions, held back resources meant to fight the virus, and encouraged the population to use medication, such as chloroquine, which has no proven efficacy to cope with the disease.

“There is a contempt for the use of masks and social distancing and, until recently, a disregard for vaccines,” Bishop Jose Santos Mendes of Brejo, president of the Brazilian bishops’ social action commission, told Catholic News Service.

Bishop Mendes was one of four bishops who signed the petition.

“We signed the request in view of the situation we are currently living, under a pandemic, with the inertia and the denialism sentiment of the (federal) government,” he said.

Bishop Mendes said authority figures have a certain weight in society and, when they disrespect rules and recommendations and discourage such things as wearing masks and social distancing, it has an effect on the population.

“What we do and say is followed and copied. If we don’t put forth clear messages, it hurts society as a whole,” he added.

Although Bishop Mendes said Christian groups and leaders have been discussing the pandemic crisis, it was the recent deaths in the Amazon city of Manaus, due to lack of oxygen canisters in hospitals, that led religious leaders to decide to speak out.

“There comes a time when we must do something concrete; we need to do something to defend and preserve life,” he said.

Although only four bishops signed the petition, there were many other Catholic religious who asked the Brazilian Congress to open proceedings to impeach the country’s top leader.

“It is unacceptable for this government to be so slow and so incompetent. What happened in Manaus can happen in other cities in the country,” said Capuchin Father Marcelo Toyansk Guimarães, ecclesiastical adviser to the Commission of Justice and Peace of the Capuchin Franciscans and one of the petition signers.

The situation must be faced with more responsibility and more seriousness, he said, noting that Bolsonaro mocked the pandemic with statements like “Everyone will die someday.”

“Everywhere life is threatened, we need to take a more serious stance,” said Bishop Mendes. “The commitment must come from all of us.”

Since the pandemic began, more than 60 petitions have been filed in Congress for Bolsonaro’s impeachment. The petition must be approved by the Lower House before going to a vote in the Senate. 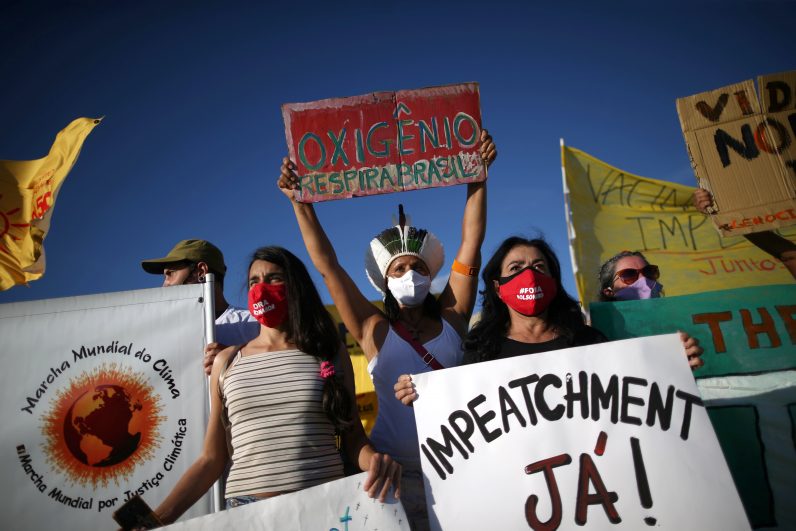 Demonstrators take part in a protest against Brazilian President Jair Bolsonaro and his handling of the COVID-19 pandemic, in Brasilia, Jan. 24, 2021. Nearly 400 Brazilian religious leaders, including many prominent Catholics, have asked the Chamber of Deputies to impeach Bolsonaro. (CNS photo/Adriano Machado, Reuters)

NEXT: Kenyan Catholics add ‘classrooms’ under trees in response to pandemic