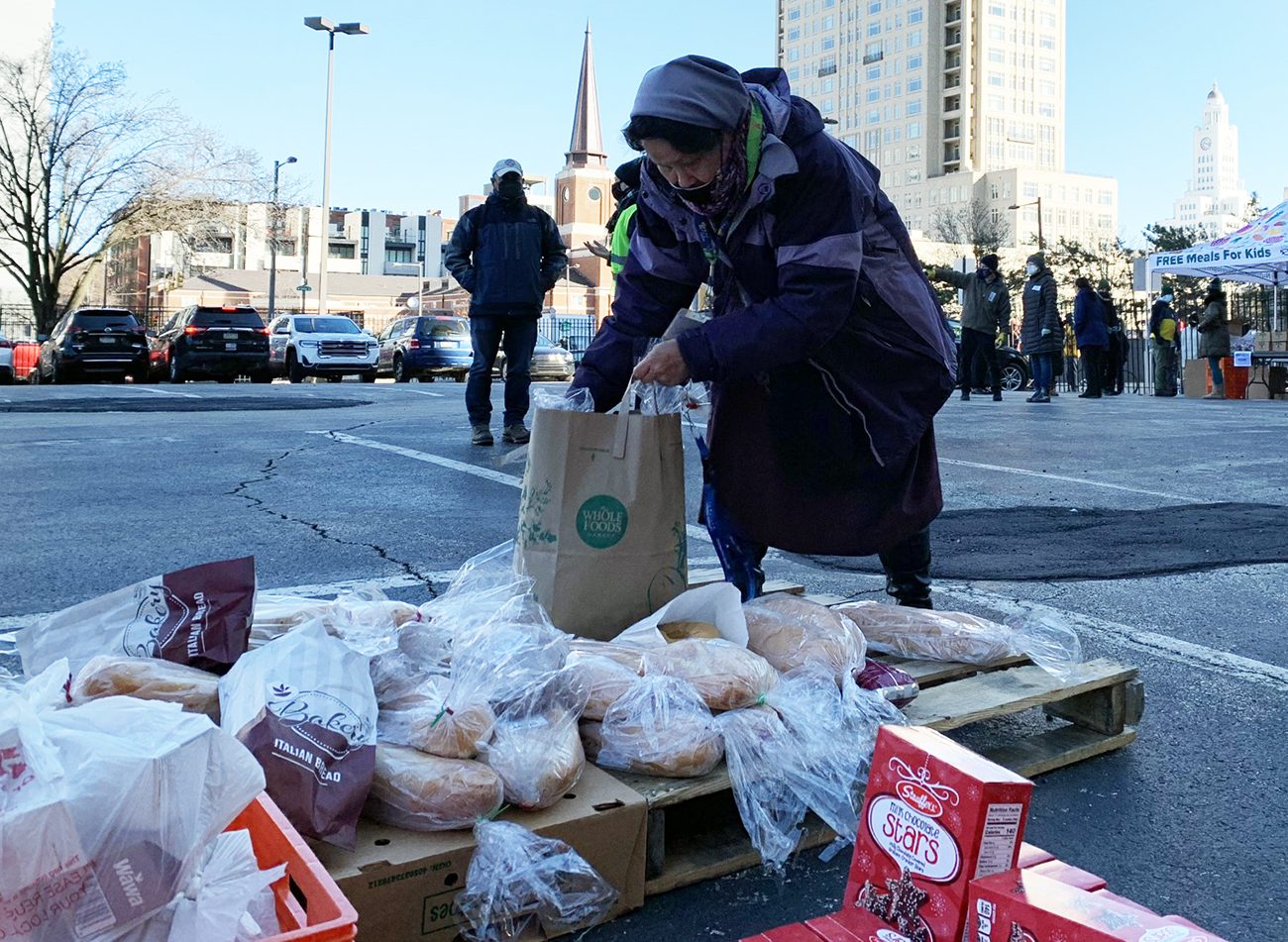 Religious of the Assumption Sister Gertrude Borres, director of the archdiocesan Office for the Pastoral Care for Migrants and Refugees, gathers fresh bread for her ministry's clients at a Jan. 30 food distribution hosted by archdiocesan Nutritional Development Services near the Cathedral Basilica of SS. Peter and Paul. (Gina Christian)

The Jan. 30 food distribution — which took place in the parking lot of the Archdiocesan Pastoral Center, located behind the Cathedral Basilica of SS. Peter and Paul — was sponsored by Nutritional Development Services (NDS).

For close to five decades, the archdiocesan agency has delivered millions of breakfasts and lunches to area children through federally funded school meal programs, while stocking a large network of community food cupboards.

Last Saturday’s outreach featured 1,000 free, pre-packaged food boxes containing fresh produce, meat and dairy products, along with a gallon of milk — all supplied through the “Farmers to Families” initiative sponsored by the U.S. Department of Agriculture (USDA).

Also available were some 650 student meal boxes for children and youth unable to access school breakfasts and lunches in person due to pandemic-driven virtual learning arrangements.

Loaves of fresh bread, boxes of cookies and — thanks to a grant from the Connelly Foundation — 300 frozen casseroles, each feeding four to five adults, rounded out the day’s offerings.

As cars lined the entire city block awaiting entry to the event, NDS executive director Lizanne Hagedorn said she was “blown away by the turnout,” which also drew archdiocesan ministry leaders who collected items for the seniors, migrants and refugees they serve.

“I really did think the weather would be a deterrent,” admitted Hagedorn. “It’s a statement of how the need is so real for people.”

She noted that despite an hour-long delay in the USDA’s delivery, “people (were) still willing to stay until their food arrived.”

Demand for food assistance has increased exponentially throughout the pandemic, with Feeding America (the nation’s largest domestic hunger-relief organization) reporting an average increase of more than 55% in visits to food banks. Approximately four in 10 are first-time clients.

The nonprofit estimates that some 50 million people in the U.S. may experience hunger as a result of COVID, with an anticipated 8 billion meals required to address the crisis.

Those statistics aren’t surprising to Jeannette Fournier, executive director of longtime NDS partner Caring for Friends (CFF), who was on hand for last Saturday’s event.

She and staff from the New Jersey-based Rastelli Foods Group, a CFF supplier, assisted with the NDS effort “to make the lines shorter, since they’re very long right now,” said Fournier.

They were joined by candidates from the permanent diaconate program at St. Charles Borromeo Seminary in Wynnewood and volunteers from archdiocesan Catholic Social Services (CSS) – a long-awaited service opportunity for both groups.

“There have literally been hundreds of people who have responded over the last year” via CSS’s online volunteer inquiry form, said Edward Lis, CSS’s director of Catholic mission effectiveness. “But we haven’t been able to use most of them … because of safety protocols.”

NDS client Chris said the outreach was “a good thing for a lot of people,” including his own family, which has struggled throughout the pandemic.

Maureen, a fine arts professional who has been unemployed since the spring, was grateful to receive nutritious food.

“I had to stop work on March 16 when (health officials) announced businesses would be shut down,” she said. “I can put these items in the freezer, and eat the produce right away. I’m trying to stay healthy.”

Many clients simply bowed their heads in relief, said volunteer Chrissy DeLizzio, a member of St. Bernadette of Lourdes Parish in Drexel Hill.

Finnegan noted that a number of vehicles contained “three to four kids,” and that families “clearly have the need and the mouths to feed.”

Having participated at three previous NDS distributions, DeLizzio said she and Finnegan remained committed to the task, even as the lines grow longer.

“You don’t think you’re making a difference,” she said. “But you are.”