Montco couple ‘an example of what love means,’ says archbishop 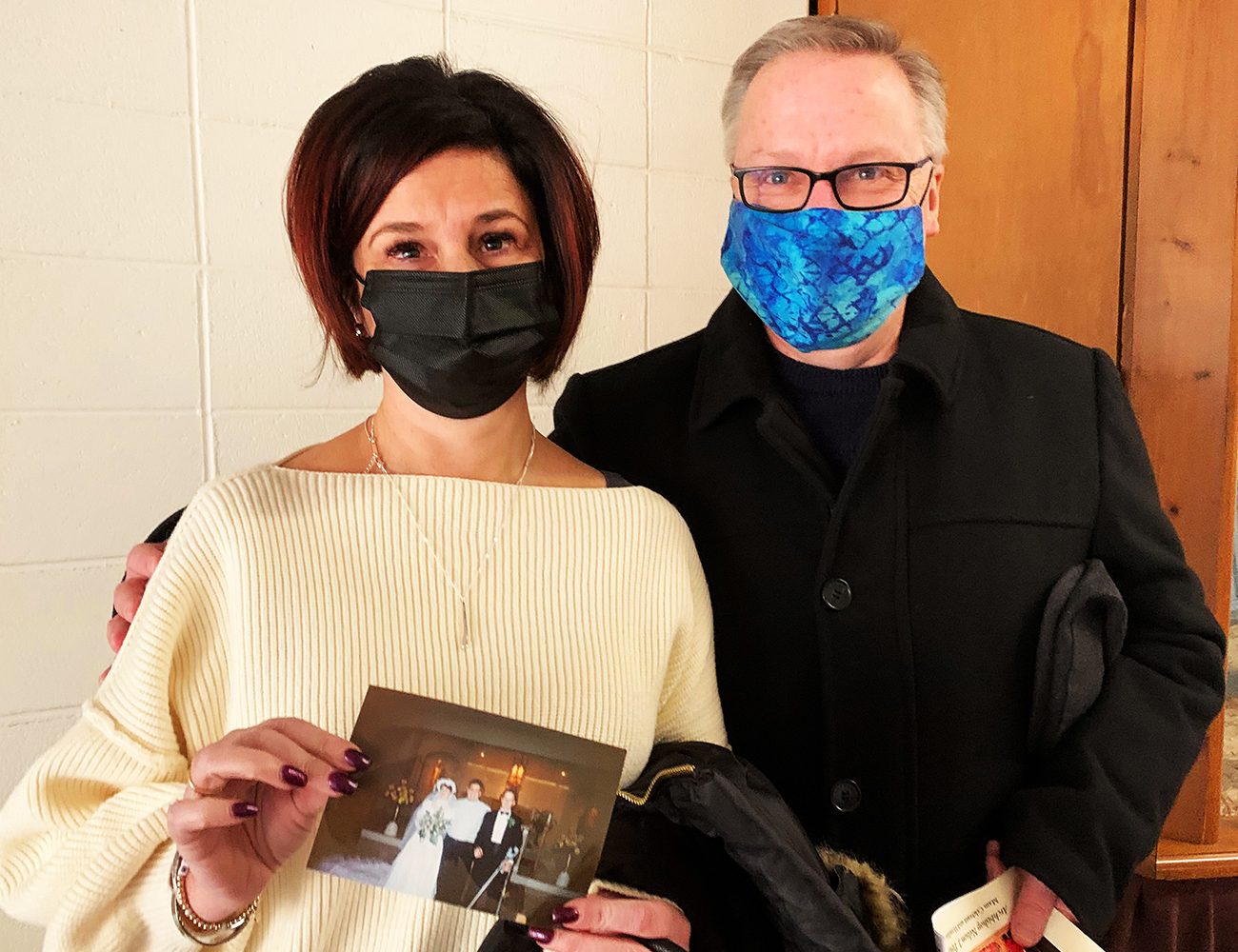 Karen and Michael Sloane of St. Teresa of Calcutta Parish in Limerick display their wedding picture with then-Father (now Archbishop) Nelson Pérez, who married them in 1990 following Michael's arduous recovery from a near-fatal car accident. The couple attended a Jan. 24 Mass at St. William Parish at which Archbishop Pérez called them "an example of what love means." (Gina Christian)

Thirty years after he married them, Archbishop Nelson Pérez gave a long-overdue hug to a Montgomery County couple who almost didn’t make it to their own wedding.

On Jan. 24, the archbishop celebrated Mass at St. William Parish in Philadelphia, where he had served as pastor from 2002 to 2009. Among the familiar faces in the pews were those of Karen and Michael Sloane, his former parishioners at nearby St. Ambrose Parish, then-Father Pérez’s first pastoral assignment.

The couple, now members of St. Teresa of Calcutta Parish in Limerick, had been married by Father Pérez in 1990 – but their journey to the altar took an unimaginable turn.

The couple had met “at a sweet sixteen birthday party,” said Michael, and they quickly became high school sweethearts.

“Karen went to Frankford (High School), and I went to Cardinal Dougherty,” he said. “We went to junior prom and senior prom together.”

When they got engaged, Karen, a Methodist, decided to convert to Roman Catholicism.

“We were going to raise our kids Catholic,” she said. “The archbishop actually did my RCIA classes his first year at St. Ambrose.”

For the young couple, the future was bright as their dreams of family and faith took shape. 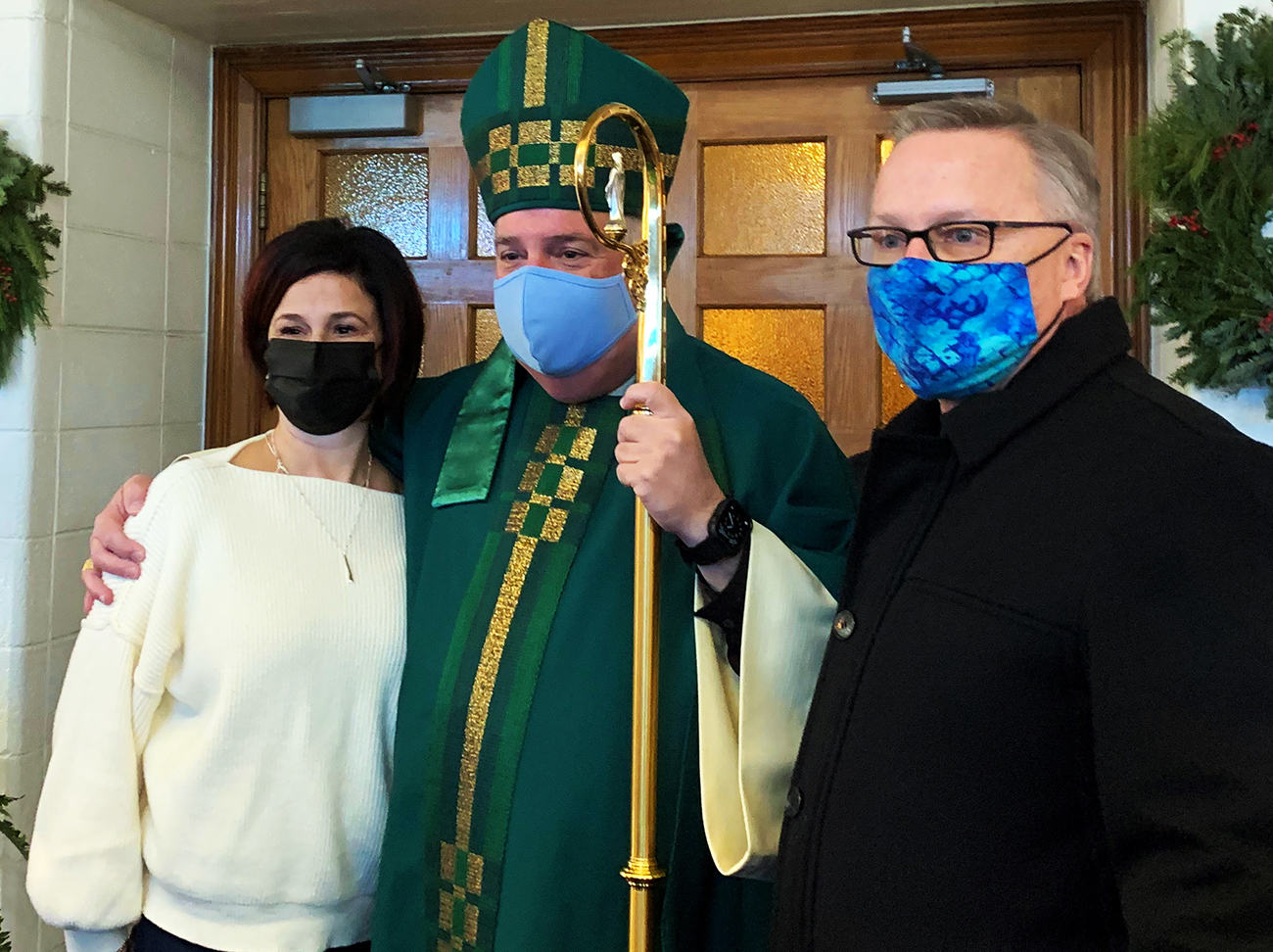 But five weeks before the wedding, Michael was in a “horrific, horrific car accident,” said the archbishop in his homily.

“I remember you were just broken up from the inside out,” said Archbishop Pérez.

Michael was placed on a ventilator for 31 days, and “possibly on his way back to the Lord,” said the archbishop, who visited the young man in the hospital throughout his recovery.

“I even had the last rites,” said Michael.

And at the young man’s bedside, “day in and day out,” said the archbishop, was Karen.

“I grew up really fast,” she admitted. “We just had faith behind us, his family and my family, and we persevered.”

While “there were times when it didn’t look great,” she said, after multiple surgeries, Michael eventually reached “a turning point, and each day got a little better.”

Some four months after the accident, Michael was released from the hospital, and immediately called his pastor.

“He asked me if I would marry them right away — that afternoon, I think,” said Archbishop Pérez.

With Michael still in a wheelchair, the couple remained seated as they exchanged their vows, standing briefly for a quick photograph afterwards. The memory of their marital promises, which “they had in a sense already lived,” has since found its way into many homilies, said the archbishop.

For three decades, “I’ve used this couple as an example of what love means,” Archbishop Pérez said.

Although doctors warned they would be unlikely to conceive due to Michael’s injuries, the couple now have three children, the first of whom (now 29) was baptized by then-Father Pérez.

Reflecting on the Sloanes’ experience, as well as the one-year anniversary of his own return to Philadelphia, Archbishop Pérez said life’s unforeseen events can ultimately reveal the divine more clearly.

“God writes straight with crooked lines,” he said. “And the impossible becomes the possible.”