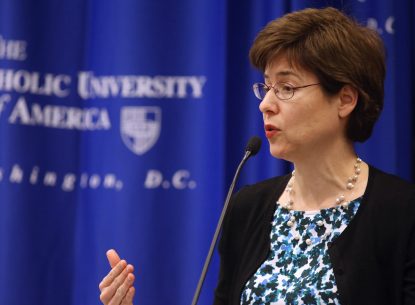 Melissa Rogers is seen at The Catholic University of America in Washington April 28, 2015. President Joe Biden signed an executive order Feb. 14, 2021, that reestablishes the White House Office of Faith-Based and Neighborhood Partnerships and reappoints Rogers to head the office, as she did under President Barack Obama. (CNS photo/Bob Roller)

WASHINGTON (CNS) — President Joe Biden signed an executive order Feb. 14 reestablishing the White House Office of Faith-Based and Neighborhood Partnerships as a means to work with religious and secular organizations to help with COVID-19 and economic recovery and confront systemic racism.

The office was established 20 years ago by President George W. Bush, who said the government can and should welcome religious and community organizations as partners.

The Obama administration continued this initiative with work on preventing foreclosures, increasing the amount of summer meals served to children in need and helping communities with disaster recovery.

Under the Trump administration, this office was vacant. President Donald Trump instead created the Center for Faith and Opportunity Initiatives, led by the Pentecostal preacher Paula White. The group, according to its website, was a liaison for grassroots organizations, faith-based groups and the Department of Health and Human Services with a focus on “religious liberty in all HHS programs and initiatives.”

Melissa Rogers, who was executive director of the Office of Faith-Based and Neighborhood Partnerships during President Barack Obama’s second term, from 2013 to 2017, will again take the helm as its executive director along with her role as senior director for faith and public policy in the White House Domestic Policy Council.

Josh Dickson, White House senior adviser for public engagement, will serve as the office’s deputy director. He served as the national faith engagement director in the Biden presidential campaign. During the Obama administration, he was director of the Center for Faith-Based and Neighborhood Partnerships at the Department of Commerce.

Just after the announcement about the White House office’s relaunch, John Gehring, Catholic program director at Faith in Public Life, described Rogers and Dickson on Twitter as “two smart, authentic people who will play an important role helping the Biden administration partner with diverse faith communities.”

And in an email to Catholic News Service Feb. 16, he said: “Melissa Rogers has deep relationships with religious leaders and is the ideal person to lead this office.”

He said Biden “wants to reclaim faith as a force for justice and the common good” and said this office would “play a critical role in connecting diverse faith communities with the administration’s efforts to confront systemic racism, poverty and respond to the pandemic.”

The day after Biden’s inauguration, several Catholic organizations joined other faith-based groups in a letter to the president urging him to “reestablish a robust White House faith-based office.”

The letter said faith-based organizations are often the “advocates and allies of last resort for the most disenfranchised Americans and issues of deepest moral complexity in our national dialogue, such as health, immigration, racial justice, climate, poverty, peacemaking and other issues. As such, we are often positioned to provide an important avenue for bipartisanship and healing in helping to build consensus and the willingness to act.”

In a statement about the reestablished office, Biden said the pandemic, economic insecurity, racism and the climate crisis affects not just Democrats or Republicans but all Americans.

“This is not a nation that can, or will, simply stand by and watch the suffering around us. That is not who we are. That is not what faith calls us to be. That is why I’m reestablishing the White House Office of Faith-Based and Neighborhood Partnerships to work with leaders of different faiths and backgrounds who are the front lines of their communities in crisis and who can help us heal, unite, and rebuild. ”

A White House news release about the office, working within federal agencies, will focus on:

It said the office will respect church-state separation and freedom for people of all faiths and those with no faith.

The White House materials also said the office will “not prefer one faith over another or favor religious over secular organizations” but will work with willing partners “to promote the common good, including those who have differences with the administration.”

NEXT: How PPP funding helped one parish weather the 2020 pandemic