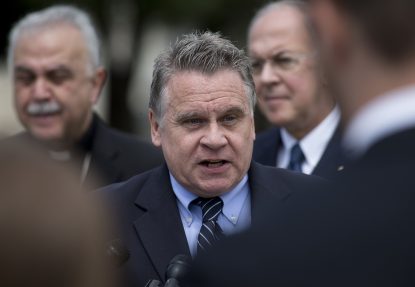 H.R. 18 — the No Taxpayer Funding for Abortion and Abortion Insurance Full Disclosure Act of 2021 — would make the long-standing Hyde Amendment permanent and keep in place similar provisions to ensure no federal dollars are used to pay for abortion and health plans that include abortion.

“When federal taxpayer dollars are not available to help effectuate the demise of unborn babies, lives are saved,” said Smith, a Catholic, who is co-chair of the Congressional Pro-life Caucus. “Abortion violence must be replaced with compassion and empathy for women and for defenseless unborn baby girls and boys.”

Smith’s bill, which was introduced Feb. 5 and has over 130 co-sponsors, also would permanently prevent the federal government from funding abortions; codify the Smith Amendment, which prohibits federal employee health care plans from funding abortion; prohibit federal funding of abortion in several other federal programs throughout government agencies; and ensure that the Affordable Care Act conforms with the Hyde Amendment.

The Hyde Amendment, first enacted nearly 45 years ago, outlaws federal tax dollars from directly funding abortion except in cases of rape, incest or when the life of the woman would be endangered.

Congress must reauthorize the Hyde Amendment annually as an attachment to the appropriations bill for the Department of Health and Human Services. It also restricts abortion funding under the Indian Health Service, Medicare and the Children’s Health Insurance Program.

President Joe Biden, also a Catholic, has said he wants to see an end to Hyde. He was a longtime supporter of the amendment, but in June 2019 during a Democratic campaign fundraiser in Atlanta, he said he now is against it in light of Republican-led efforts in some states to see laws passed to restrict abortion. 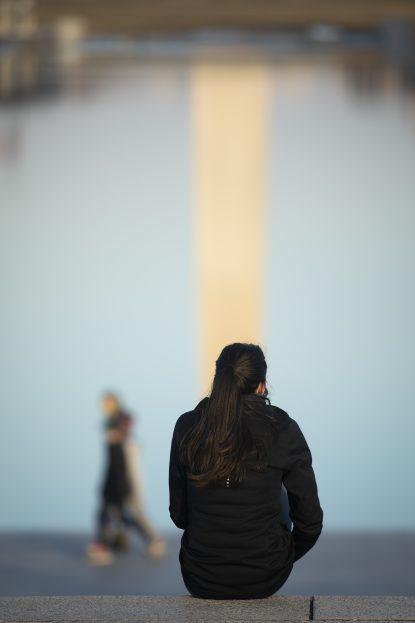 A woman is seen at the reflecting pool near the Washington Monument in Washington Feb. 8, 2021. (CNS photo/Tyler Orsburn)

Among the executive orders he has signed since his Jan. 20 inauguration was one rescinding the so-called “Mexico City policy” that blocked U.S. funding for nongovernmental organizations that perform or actively promote abortion as a form of family planning in other nations.

During his first days in office as president, Biden also signed an executive order lifting the Trump administration’s enforcement of a rule in the Title X Family Planning Program that banned taxpayer funds from being used to promote or provide abortion as family planning.

In introducing the No Taxpayer Funding for Abortion measure, Smith cited polling that “consistently shows a majority of Americans oppose taxpayer funding of abortion — nearly six in 10.”

He cited key findings of a new Knights of Columbus/Marist Poll released Jan. 27:

— A majority of Americans (58%) oppose using taxpayer money to fund abortions within the United States. The breakdown among respondents’ party affiliation shows 31% of Democrats oppose this use of taxpayer money, as do 83% of Republicans and 65% of Independents.

— More than three quarters of Americans (76%), including a majority who identify as “pro-choice,” want significant restrictions on abortion.

— 77% of those polled either “oppose” or “strongly oppose” using tax dollars to support international abortion (This was up from 75% who answered similarly each of the past two years.) The breakdown among respondents’ party affiliation shows 55% of Democrats feel this way, as do 95% of Republicans and 85% of Independents.

PREVIOUS: World Marriage Day to be celebrated this year on Feb. 14, Valentine’s Day