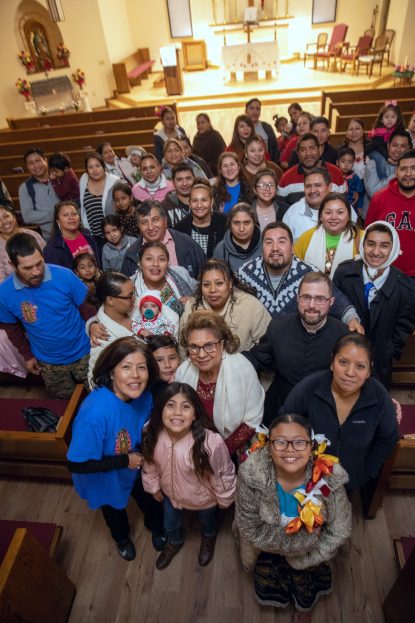 Parishioners gather at St. Luke’s Church in Warren, Ark., in this undated photo. The parish church was built with support of Catholic Extension donors. On Feb. 8, 2021, Chicago-based Extension announced the Catholic Kinship Initiative to match financially stable parishes with a poor parish in another part of the country. (CNS photo/Rich Kalonick, courtesy Catholic Extension)

It’s the Catholic Kinship Initiative — Parishes United Across America, and it’s designed to match financially stable parishes with a poor parish in another part of the country.

The initiative is seeking 1,000 faith communities to raise a minimum of $1,000 each during the Lenten season and beyond to help the 1,000 poorest parishes in the country that are serving the poor.

Details about the program can be found online at http://www.catholicextension.org/alms.

The initiative is “something we’re very excited about,” said Joe Boland, Extension’s vice president of mission. He called it “a theological response, not only to this season of almsgiving, but gives us an opportunity to do something spiritually for ourselves, (is) something we can do to express the universality of the church in this year of St. Joseph but also something we can do in this very difficult year in which we’ve lived.”

“We know this pandemic and this economic downturn has impacted everybody, but it’s also impacted people in different ways,” he said Feb. 17 in an interview on Relevant Radio’s “Morning Air” with John Harper. “And we’re particularly mindful of the poor and our poor parishes in this country who are serving the poor, so that’s what this Catholic Kinship Initiative is designed to do.”

The gift of $1,000 can make a significant impact to parishes whose collections have dwindled to almost nothing since the onset of the pandemic, said a Feb. 8 Catholic Extension news release announcing the initiative.

In his interview, Boland gave examples of parishes in need of a lot of help, like in the Diocese of Ponce Puerto Rico. A year ago they were trying to deal with the earthquake that had just happened and “leveled some of their churches to piles of rubble,” he noted.

“By way, they’re still piles of rubble, we’re working on that problem,” he said. But the more immediate need is helping the parishes “doing the basic work of the church in serving these poor communities which have been under even greater duress this past year” because of the pandemic.

“Some of those parishes in the Diocese of Ponce have seen their collections go down by 90%,” Boland said. “Those are going to be among the parishes that are supported (by the Catholic Kinship Initiative). We’re going to help pay some of the priests’ salaries who are just doing beautiful work among the people in keeping the ministerial activities going.”

The initiative also will help support other parishes like those in the Appalachian Mountains, he said.

“It’s a place where Catholics are a very, very small minority but their presence is felt so powerfully,” he said, “and so often you’ll just have one little tiny Catholic church in an entire county, but people know in that county whether they’re Catholic or not that if they need help, they go to the Catholic church.

“So some of the support is going to help prop up some of those beautiful churches in Appalachian Mountains that are feeding the hungry, serving the poor and addressing persistent poverty that exists in their community,” Boland added.

“This is some of the beautiful work that’s happening in the Catholic Church” and is “often unseen,” he said. “We think this initiative is a way to make that a little bit more visible, but it’s a great conduit for us to express our solidarity with those who are really struggling right now and are really in distress.”

This year especially Boland said is an opportunity to find ways to “help us realize that we are part of a larger body of believers and to help express that unity we share with others us,” whether it is through the Catholic Kinship Initiative or some other effort.

“We are not just some collection of parishes sort of loosely bound up,” Boland explained. “Unity is a gift that was given to us. Our church teaches us that that was a gift given to us by Christ himself, but it’s up to us to strive, to preserve that unity, to maintain that unity, especially in this year of St. Joseph, my patron but also the patron of universal church.”

Father Jack Wall, president of Catholic Extension, said in a statement that every $1,000 gift they receive “will enable parishes and pastoral leaders … to do the core spiritual work of the church among the poor as well as share the corporal works of mercy with those who are suffering.”

Catholic Extension has been supporting the work and ministries of the nation’s mission dioceses since its founding in 1905.

It raises funds to help build up faith communities and construct churches in these dioceses, which are rural, cover a large geographic area, and have limited personnel and pastoral resources.

NEXT: Parishes should plan now how to welcome back parishioners