Institute in San Francisco launches ‘Year for the Homeless’ 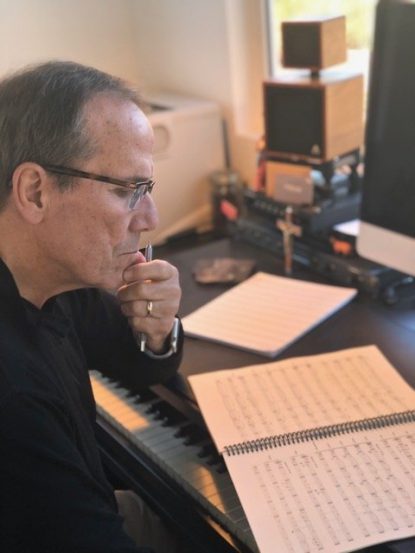 SAN FRANCISCO (CNS) — The Benedict XVI Institute for Sacred Music and Divine Worship in the San Francisco Archdiocese Feb. 4 launched a “Year for the Homeless,” which includes calling people to prayer, commissioning a special requiem Mass and holding a series of fundraisers via Zoom to help the homeless.

“I join Pope Francis in asking all of our people to pray for those dying homeless in the streets of San Francisco and beyond,” said Archbishop Salvatore J. Cordileone.

He was referring to the pope’s remarks Jan. 24 publicly mourning the death of Edwin, a Nigerian who had been sleeping near St. Peter’s Square, and whose death was attributed to Rome’s overnight cold temperatures.

“Let us think of what this man, 46 years old, felt in the cold, ignored by everyone, abandoned, even by us,” the pope said after reciting the Angelus prayer. “Let us pray for him.”

The San Francisco archbishop called the institute’s yearlong focus on the homeless innovative for “combining prayers, charity and new creative endeavors to touch the Catholic imagination with the profound reality of the equal dignity of every human soul.”

“I also salute the heroes of Catholic Charities, the good sisters of the Missionaries of Charity and many other Catholics in San Francisco as well as other people of faith who are serving and protecting many of these suffering men and women,” he said in a statement.

Maggie Gallagher, executive director of the Benedict XVI Institute, said the pope’s call for prayers for Edwin “is particularly timely” because the institute has commissioned a “Requiem Mass for the Homeless” by its composer in residence, Frank La Rocca.

A few years ago, La Rocca was commissioned by San Francisco’s Cathedral of St. Mary of the Assumption to compose a special “Mass of the Americas” as “a simultaneous tribute” to Our Lady of the Immaculate Conception and Our Lady of Guadalupe, whose feast days are Dec. 8 and Dec. 12, respectively.

Celebrated at the cathedral for the first time Dec. 8, 2018, the Mass includes music in Spanish, Latin, English and Nahuatl, the Aztec language Mary used when she spoke with St. Juan Diego in Mexico in the 16th century.

La Rocca’s “Requiem Mass for the Homeless” will be celebrated for the first time Nov. 6 with the Benedict Sixteen Choir, led by the world-renowned conductor Richard Sparks.

The institute also has commissioned a new painting, “The Patron Saints of the Homeless,” by San Francisco painter Bernadette Carstensen.

“With this new painting, we can set up a shrine for Mass attendees to pray for the homeless, and which can travel to other cathedrals as well,” said Gallagher.

These patrons of the homeless and their feast days are: St. Josephine Bakhita, patron saint of human trafficking, Feb. 8; St. Benedict Joseph Labre, who took up the Franciscan call to live as the homeless did and died of starvation on the streets of Rome, April 16; St. Anthony of Padua, for whom “St. Anthony’s bread” — a traditional gift to the poor — is named, June 13; St. Maximilian Kolbe, a martyr of charity and patron saint of addicts, among others, Aug. 14; St. Teresa of Kolkata, who served “the poorest of the poor,” Sept. 5; St. Francis of Assisi, patron saint of the poor, Oct. 4.

The institute plans a series of fundraisers via Zoom for ministries working for the needy, centered on the feast days of these patron saints, Gallagher said.

The first event kicks off Feb. 8, St. Josephine Bakhita’s feast day. A preliminary sketch of the saint will be auctioned off to raise money for Children of the Immaculate Heart, a San Diego ministry that shelters and supports survivors of sex trafficking.

Gallagher said 100% of the funds raised by the “Year for the Homeless” Zoom events will help “those assisting the homeless and other needy populations.”

“‘Pray. Love. Sacrifice. Create.’ That is our motto for this year. It’s a pretty good motto for any year,” she noted.

Added Archbishop Cordileone: “May the beauty of this Mass and this painting serve to touch our hearts and infuse us with the reality that our souls are immortal and loved by God unconditionally. May it inspire us to pray more together and to help each other in these troubling times.” 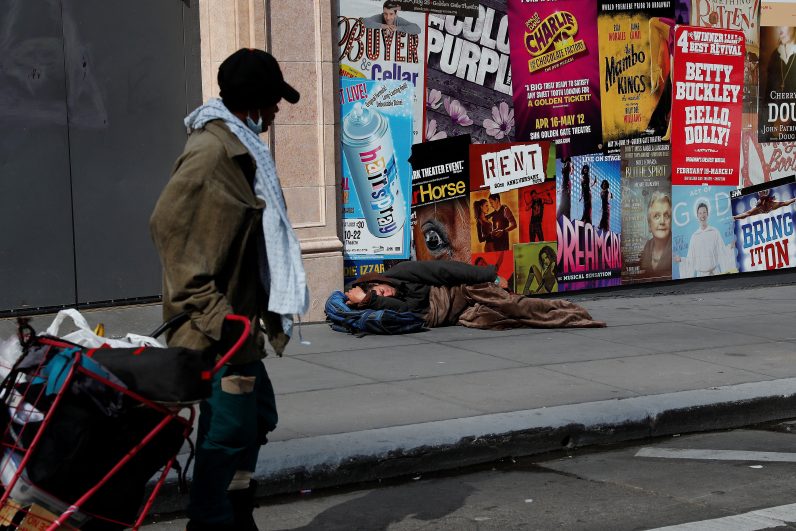 A man in San Francisco sleeps on the sidewalk March 27, 2020, amid the coronavirus pandemic. (CNS photo/Shannon Stapleton, Reuters)

PREVIOUS: Bishop warns against ‘weaponization of Eucharist’ with elected officials

NEXT: School’s parent guide aims to help with transition to distance learning