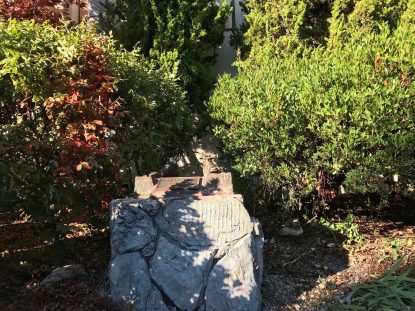 The base of what was a St. Junipero Serra statue is seen in front of Mission San Raphael in San Rafael, Calif., after vandals tore down the statue Oct. 12, 2020. (CNS photo/courtesy Archdiocese of San Francisco)

This matter “will soon rest in the hands of a judge or jury,” the archbishop said.

The attack came on the federal holiday of Columbus Day, which is known as Indigenous People’s Day in California and elsewhere.

The Serra statue outside Mission San Rafael in San Rafael, in the San Francisco Archdiocese, was desecrated with red paint and toppled, leaving just the saint’s feet in place.

The five people, each charged with one count of felony vandalism, pleaded not guilty. They are all from California and identified by the news media as Ines Shiam Gardilcic, 40, and Victoria Eva Montanopena, 29, both of Oakland; Melissa Aguilar, 36, of Novato; Marjorie Nadeska Delgadillo, 36, of San Rafael; and Moira Cribben Van de Walker, 25 of San Anselmo.

The activists are being called the #IndigenousPeoples5, or the “IP 5,” by their supporters, who are demanding Marin County drop all charges against the five indigenous women.

“If a crime caught on videotape and witnessed by the police were not to have been prosecuted, it would have sent a profoundly disturbing message to the hundreds of thousands of people of faith in Marin County: Churches, synagogues, mosques and temples are at the mercy of small mobs,” Archbishop Cordileone said in his statement.

“Even more, this would set an extremely troubling precedent in that no one could be secure that those who perpetrate crimes against them will be prosecuted for their wrongdoing,” he added.

He thanked the San Rafael Police Department and the Marin County District Attorney’s Office for recognizing that social justice requires justice: that all of us enjoy the equal protection of the laws.”

The archbishop also addressed the detractors of St. Junipero Serra, saying: “We live in a time of tumultuous change and angry division. Junipero Serra lived a life of sacrificial devotion to the poor, the weak and the marginalized in the tradition of St. Francis of Assisi. To Catholics, that means that he is a great saint. It is for good reason that Pope Francis canonized him on American soil in 2015.”

St. Junipero’s “dedication to protecting the native peoples of California is documented by historians,” he said, but “nevertheless — sadly and falsely — to some St. Junipero has become a symbol of the terrible human rights abuses committed against California indigenous peoples by Spanish conquerors and later the genocide perpetrated on them by the Anglo Americans who governed California.”

“To heal and unite is not easy; it requires dialogue with goodwill, honesty and humility, and above all putting aside violence as a response,” Archbishop Cordileone added.

On Nov. 13, 2020, when Marin County District Attorney Lori Frugoli filed charges day against five people for allegedly defacing and pulling down the Serra statue, the archbishop called it “a breakthrough moment for Catholics.”

He called it “the first time that any of the lawbreakers attacking statues of St. Junipero Serra and other acts of vandalism on Catholic Church property across California will be held accountable for their actions in a court of law.”

NEXT: Maine’s new order on religious gatherings ‘unacceptable’ to bishop