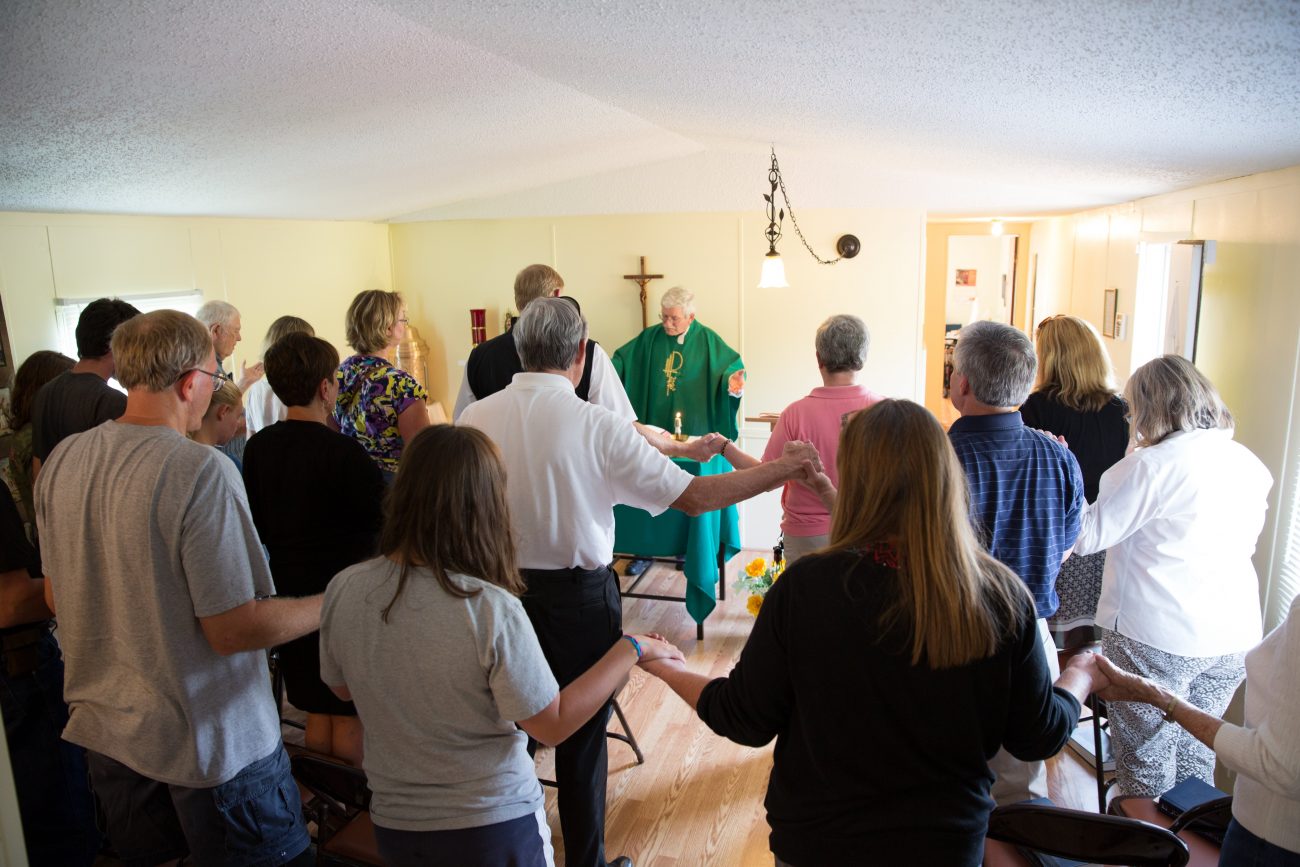 In this 2013 file photo, Mass is celebrated at St. Luke's Church in Salyersville, Ky., a parish in the Diocese of Lexington that is supported by Catholic Extension. The majority of the counties within the diocese are rural and in mountain areas where communities are challenged by high rates of unemployment, poverty and other problems resulting from a lack of basic necessities. (CNS photo/Rich Kalonick, Catholic Extension)

WASHINGTON (CNS) — Just as it was in much of American society this past year, the financial toll exacted by the coronavirus pandemic affected poor parishes and dioceses more starkly than it did larger and more well-to-do Catholic institutions.

While that’s not to say that bigger dioceses and parishes didn’t feel any sting — some dioceses started making cuts in the early months of the pandemic — smaller churches and dioceses at the outset didn’t have the financial wherewithal to deal with its consequences.

The year ahead may offer at least a glimmer of hope to dioceses and churches who nonetheless responded to the call for help and accompaniment, but the road is far from easy.

One thing is certain: The federal government’s Paycheck Protection Program was a lifeline to parishes and dioceses of all sizes.

If a diocese is “mainly rural or there’s not a lot of Catholics in that region, those things affect a diocese,” Patrick Markey, executive director of the Diocesan Fiscal Management Conference, told Catholic News Service. “For the most part, the church relies on Catholics to support it. In the United States, we work off donations, so it’s all based on the people that serve in the diocese.”

Markey added, “Even though it might be a wealthy area of the country, if the people who hold that wealth, if they’re not Catholics, sometimes they’ll support the Catholic Church” and its schools, “but they might not.”

“Working with 86 of the poorest dioceses in the United States, if you were to add up all of the financial assets of the 86 dioceses we work with, they do not equal the assets of a large metropolitan archdiocese like Chicago or New York or L.A.,” said Joe Boland, vice president of mission for Catholic Extension. “I know, because I’ve seen each of their audited financial statements.”

Boland added, “It’s a far different playing field. They were financially struggling even before the pandemic started.”

He compared it to society at large: “There were people that made it through and organizations that made it through the pandemic OK — barely scathed. And there were the people who were on the shakiest financial footing, those are the ones who suffered the most. … The same is true for the Catholic Church.”

Catholic Extension labels the 86 dioceses with which it works “mission dioceses,” most often due to the small percentage of Catholics in a diocese relative to the diocese’s sizable territory, which means Catholics are spread far apart. Eighty of those 86 dioceses received PPP grants, Boland said.

“The financial impact of the pandemic was not equally felt even among our dioceses,” he added. “We know that particularly in the Southwestern dioceses — many of them the poorest to begin with, even before the pandemic began — they are the ones that were reporting to us the greatest signs of distress.

“Another region that was equally impacted was Puerto Rico. We work with all six dioceses in Puerto Rico,” Boland told CNS. “Earthquakes at the beginning of the year reduced some churches to rubble. All of the dioceses of Puerto Rico are still recovering from Hurricane Maria (in 2017). They were reporting on average that their parish collections were down in the 50 to 90% range.”

By comparison, Markey said initial parish collection drop-offs nationwide were in the 40%-60% range, and have since settled in the 15%-30% range.

Boland spoke of the situation of Father Fabian Marquez, pastor of El Buen Pastor Parish in Sparks Colonia, an unincorporated area of El Paso, Texas. “They had to shut down El Paso, and the entire county was experiencing a great deal of infection,” Boland said. “We remember the images of the refrigerator trucks just to keep up with the death toll that they were experiencing.”

Because of the pandemic-related deaths, infection, job losses and fear of contracting COVID-19 all affecting Mass attendance, “their weekly collection would go down to, like, $45 on a Sunday. He had to look at forgoing his salary just so he could pay staff, so he could make sure the church was open and available to the community,” Boland said.

Catholic Extension unveiled Ash Wednesday its Catholic Kinship Initiative — Parishes United Across America, hoping to match 1,000 U.S. parishes with 1,000 of Extension’s poorest parishes in the country, in hopes the stable parish can raise or contribute $1,000 during Lent and beyond to its matched parish.

The largely rural Diocese of Victoria, Texas, is getting by. It qualified for PPP loans for many of its 50 parishes, 17 missions and some schools. Offertories are down 3%-45%, and school enrollment is down 6%, according to Tony Martinez, chief financial officer of the diocese.

“Our parishes suffered — there’s no doubt they suffered income — but, you know, our parishes, I don’t know how to describe it, they’re small operations. They don’t have a big staff. They’re just a few people. But they were able to operate,” said Bishop Brendan J. Cahill of Victoria.

“I would say one of the surprises for us was that it clearly was a drop-off financially, but we were able to survive. I think that the spiritual thing was the reality for the sacramental life, the prayer life, the communications that were used, that people kept in touch with each other,” said Bishop Cahill, who also is chair of Catholic Rural Life’s board of directors.

He acknowledged the PPP loans were seen as “controversial for the Catholic Church, but we’re an employer, and the idea was to protect people’s jobs. And that helped our schools, especially.”

At the chancery, according to CFO Martinez, “well, we’re nervous. We’re sending out our annual Diocesan Service Appeal … which is essentially the parish support for the diocese. We essentially kept it flat (compared) to prior years in terms of funding. Currently, about 65% of our chancery departments, including the bishops’ office, is funded through the DSA.”

The upshot, said the DFMC’s Markey, is “there’s a lot of adjustments that need to be made or have been made.” He said, “We have to see what happens in this year. Offertories will probably stay low until people can come back into churches again.”

Markey added, “On the other hand, people are incredibly generous. The generosity we’ve seen in our parishes and our charities — people are hurting but they’re giving. They’re really helping one another. From my perspective, it’s really heartwarming.

PREVIOUS: Parishes should plan now how to welcome back parishioners