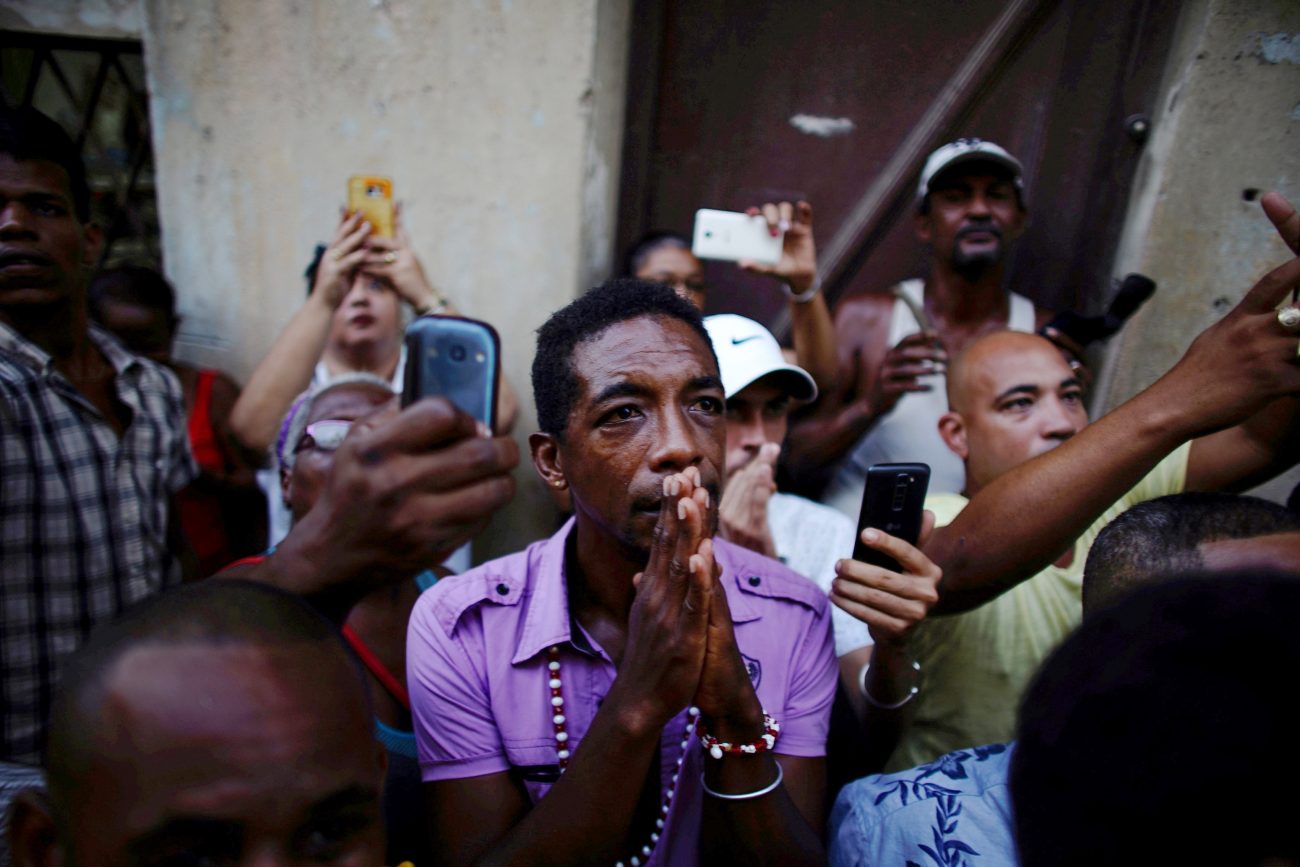 A man prays with other worshippers in Havana Sept. 8, 2018, during the annual procession of Our Lady of Charity, Cuba's patroness. Hundreds of Cuban Catholics issued an appeal asking citizens to take their future into their own hands and begin to effect change. (CNS photo/Alexandre Meneghini, Reuters)

WASHINGTON (CNS) — Hundreds of Cuban Catholics, including bishops, religious and laypeople, issued a public appeal for people to begin to take control of the future of their country.

“The Cuban people, although slowly, have been overcoming and unlearning helplessness,” it said. “This is a very important path to empowerment and recovery of social self-esteem. It is important that we come to feel stronger, that we convince ourselves that we can act and live without being paralyzed by fear, so that we come to express ourselves freely, to seek the good and justice while preserving peace, and to be critical of our reality, because in fact, it is the duty of everyone to contribute to the building of a new Cuba.”

The “fundamental option to live in truth and freedom reveals our real power as citizens. We are a sleeping giant that can make Cuba change; it just needs to wake up,” the appeal said.

The document said it was in communion with the nation’s bishops and St. John Paul II, who, during his visit in 1998, “urged us to ‘be protagonists in our own personal and national history.'” The appeal was released Jan. 24, 23 years after St. John Paul, preaching at a Mass in Santiago de Cuba, issued that challenge to the laity.

“God works with us and asks us, like he asked Moses, to enact our share of responsibility and freedom,” the appeal said. “As St. Augustine used to say, ‘The God who created you without you will not save you without you.'”

The appeal also quoted retired Pope Benedict XVI and Pope Francis, both of whom visited the island nation. It spoke of the economic and political pressures on Cubans and the systemic corruption in a society that “makes the ‘black market’ an indispensable ally for survival (in) an environment dominated by theft, bribery, and even blackmail.”

Cuban society now has a system of those who have wealth and power — sometimes because of political affiliation — and those who do not. In some cases, the only way for families to survive is by separating families members, it said.

“Economic frustration and the exhausting daily struggle to survive cause the loss of a moral horizon,” the appeal said. “The Cuban family, focused on survival, runs the risk of closing itself off to life. Not infrequently, the announcement of a baby, which should be a cause for hope and joy, becomes the cause of uncertainty and worry, and ends in abortion.”

“We are living through a critical moment in our nation’s history. The official attempts at responding to it reveal that the crisis involves the very structure of our system, which has shown itself clearly opposed to holding an open, transparent dialogue, and promoting verbal, psychological, and physical violence instead of seeking a realistic and inclusive debate, presenting the different proposals and leading to invaluable solutions,” said the appeal, released by Aid to the Church in Need USA, part of the German-based pontifical foundation that has projects in Cuba. It said the appeal had more than 700 signers by Feb. 1.

Noting that “governments exist for the people and by the people,” it said it was “time to overcome the fallacy that we should be grateful for what in reality are the state’s duties. Health, education, social welfare, civil peace, leisure and recreation, democracy and freedom of expression — among others, they are not gifts but rights, and the state exists to guarantee them.”

The document called for a “better legal framework,” noting that the country had no law firms independent of the state. It also called for full citizenship for Cubans living abroad.

It said the people needed to “understand what national reconciliation means.”

“As a people, we have unresolved wounds and conflicts. We want to reconcile to live well and in peace, and this will only be possible by recognizing the existence of conflicts and seeking a solution in the midst of them,” it said.

It also cited Pope Francis’ encyclical, “Fratelli Tutti,” which warned people to love everyone, but not to renounce rights before a powerful corrupt person or someone who downgrades human dignity.

Cubans must empty their hearts of hatred, then must “absolutely renounce violence, even verbal aggression, slander,” the appeal said.

“A new Cuba must be humane and humanizing of its citizens,” it said, and it must not exclude people. “Good and necessary change is not possible if we remain divided. We must put down particular interests and think about common projects and aims.”

NEXT: Bishop warns against ‘weaponization of Eucharist’ with elected officials