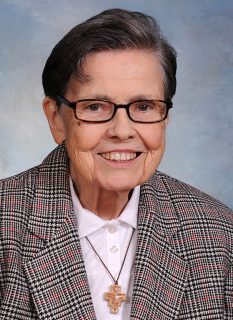 Sister Hildegarde Grogan, O.S.F., died Jan. 20 in Assisi House, Aston. She was 87 and had been a professed member of the Sisters of St. Francis of Philadelphia for 64 years.

Sister Hildegarde was born Mary Magdalen Grogan in Philadelphia where she was a member of St. Raymond Parish and a graduate of the Little Flower Catholic High School for Girls. She entered the congregation in 1954 and professed her first vows in 1957.

She earned her registered nursing degree from St. Joseph Hospital in Baltimore, her B.S.N. from Duquesne University and her M.S.N. in Medical/Surgical Nursing from the Catholic University of America. She ministered primarily in health care and education.

Sister Hildegarde ministered for 34 years in the Archdiocese of Philadelphia including for seven years as a nurse and later as vice president of patient services at St. Mary Medical Center in Langhorne.

A majority of her time in the archdiocese, 24 years, was spent at Neumann University in Aston where she served as a professor, as coordinator of the Gerontology Department of Continuing Professional Studies and as the director of the Lifelong Learning Center.

She also ministered for 15 years in the Diocese of Wilmington, five years in the Archdiocese of Baltimore and four years in the Harrisburg Diocese, all in health care ministry at Catholic institutions.

Sister Hildegarde moved to Assisi House in 2017 and served in prayer and hospitality ministry until her death.

The funeral Mass was Jan. 26 in Assisi House. Burial was in Our Lady of Angels Cemetery in Aston.

Sister Hildegarde is survived by nieces, nephews and her Franciscan family.

NEXT: Sister Mary Jane Daily dies at 84, was Sister of St. Joseph for 66 years