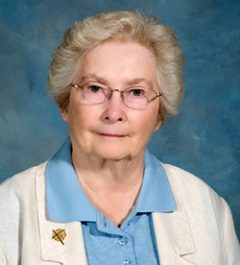 The daughter of the late Richard and Mary Dougherty, she attended St. Ursula Grade School in Bethlehem, Pa. In September 1944 she entered the Sisters of St. Joseph, Chestnut Hill, and professed her final vows in 1952.

Sister Sally ministered in the Diocese of Allentown, and the Archdioceses of Newark, Philadelphia and Washington.

She is the sister of James Dougherty and the late Dennis Dougherty, Richard Dougherty and Mary Dougherty Walsh. She is also survived by nieces, nephews, grandnieces, grandnephews and members of her congregation, the Sisters of St. Joseph.