In meeting with U.S. Catholic journalists, pope speaks of hope 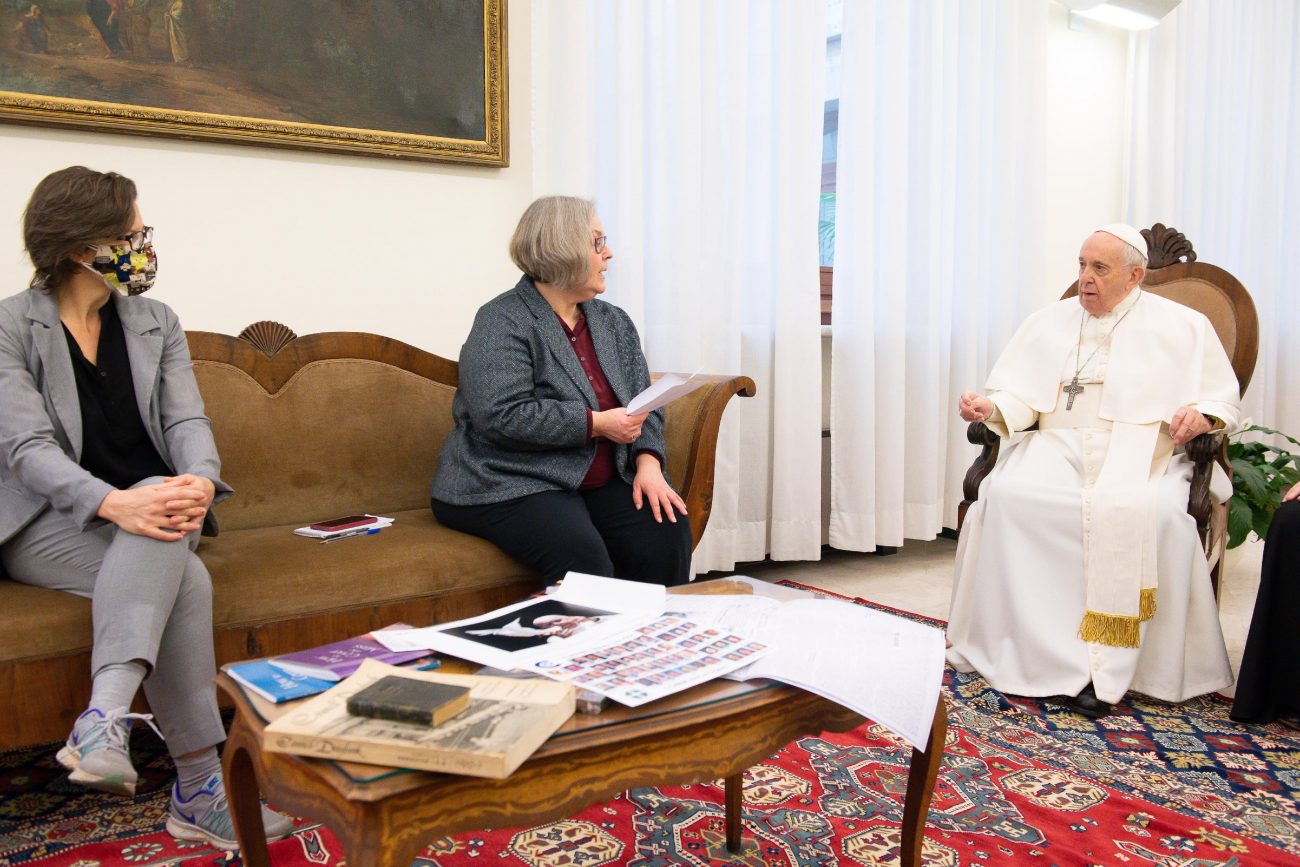 Pope Francis meets with members of the Catholic News Service Rome bureau at the Domus Sanctae Marthae at the Vatican Feb. 1, 2021. The meeting was in recognition of the 100th anniversary of CNS. Pictured on the couch are Carol Glatz, correspondent, and Cindy Wooden, bureau chief. (CNS photo/Vatican Media)

VATICAN CITY (CNS) — Pope Francis said that unless there is a serious new wave of COVID-19 infections in Iraq, he has every intention of visiting the country in early March.

Even if social distancing requirements mean most Iraqis will see the papal events only on television, he said, “they will see that the pope is there in their country.”

“I am the pastor of people who are suffering,” Pope Francis told Catholic News Service Feb. 1. He also said that if he had to, he would consider taking a regular commercial flight to get there.

The pope is scheduled to travel to Iraq March 5-8. St. John Paul II had hoped and planned to go to Iraq in 2000, particularly to visit the city of Ur, birthplace of Abraham, recognized as the patriarch of faith in one God by Jews, Christians and Muslims.

Tensions in the region made the trip impossible, and St. John Paul “wept” that he could not go, Pope Francis said, adding that he does not want to disappoint the people a second time.

The meeting with Catholic News Service marked the 100th anniversary of the news agency of the U.S. bishops’ conference.

Asked about the role of U.S. Catholic journalists today, Pope Francis said, it is to promote unity and to “try to get people to talk to each other, reason together and seek the path of fraternity.”

“A divided church is not the church,” he said. 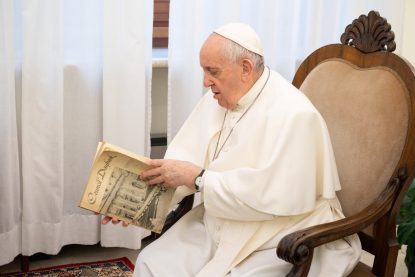 Pope Francis looks at the “Council Daybook,” produced by Catholic News Service covering the Second Vatican Council, during a meeting with members of the Catholic News Service Rome bureau at the Vatican Feb. 1, 2021. The special audience was in recognition of the 100th anniversary of CNS. (CNS photo/Vatican Media)

“The church in the United States is a church that has been courageous — the history it has and the saints — and has done so much,” the pope said. “But if the communications media throw gas on the fire on one side or another, it doesn’t help.”

“The path of division leads nowhere,” he said. “Remember the prayer of Jesus, ‘That they may all be one’ — unity that is not uniformity, no. Unity with differences, but one heart. ‘I think this way, you think that. We can discuss it,’ but with the same heart.”

“There are perhaps traditionalist groups in the United States, but there are here in the Vatican, too,” he said.

Pope Francis said that when he met with a newspaper association in Buenos Aires, Argentina, years ago, he told them to beware of four sins and that those sins are still a threat to news media today: “disinformation” or giving only part of the story, because the nuances of the whole story are essential for discovering truth; “calumny, which is a grave sin, ruining the reputation of another” with a lie; “defamation,” which is similar, but often involves publishing something from someone’s past, “even though they changed their lives”; and “coprophilia,” which he described as “a love of dirt,” because “scandal sells.”

“Don’t fall into these sins,” he said.

After missing several big liturgies and appointments over the new year and again in late January because of a flare-up of sciatica, a painful nerve condition, Pope Francis said he can tell when an attack is coming on, and he tells his doctor. The physician’s advice, he said, is to cancel or postpone events where he would be standing for long periods, because the pressure would make the condition much worse the next day.

But, he said, the doctor told him, “But do the Angelus or people will say you are dead.”

Asked his opinion of the church in the United States, Pope Francis said it is “a church that is alive, vivacious.” He pointed in particular to the vast network of Catholic schools and to the church’s efforts to assist and help integrate immigrants; he specifically mentioned the leadership of Archbishop José H. Gomez of Los Angeles and Bishop Mark J. Seitz of El Paso, Texas.

“It is a church that is ‘catholic’ in the sense of universal because of immigration. What the church has done for immigrants is great. And, also, it is very generous in helping others and it is humble because of how much it suffered from the crisis of sexual abuse,” he said. “And it’s a church that prays.”

“You know its defects better than I do,” he said, but “I look at the U.S. church with hope.” 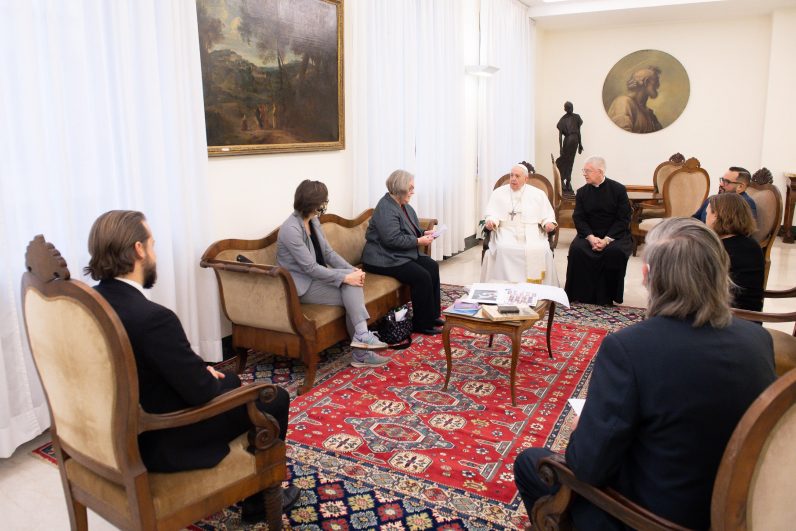