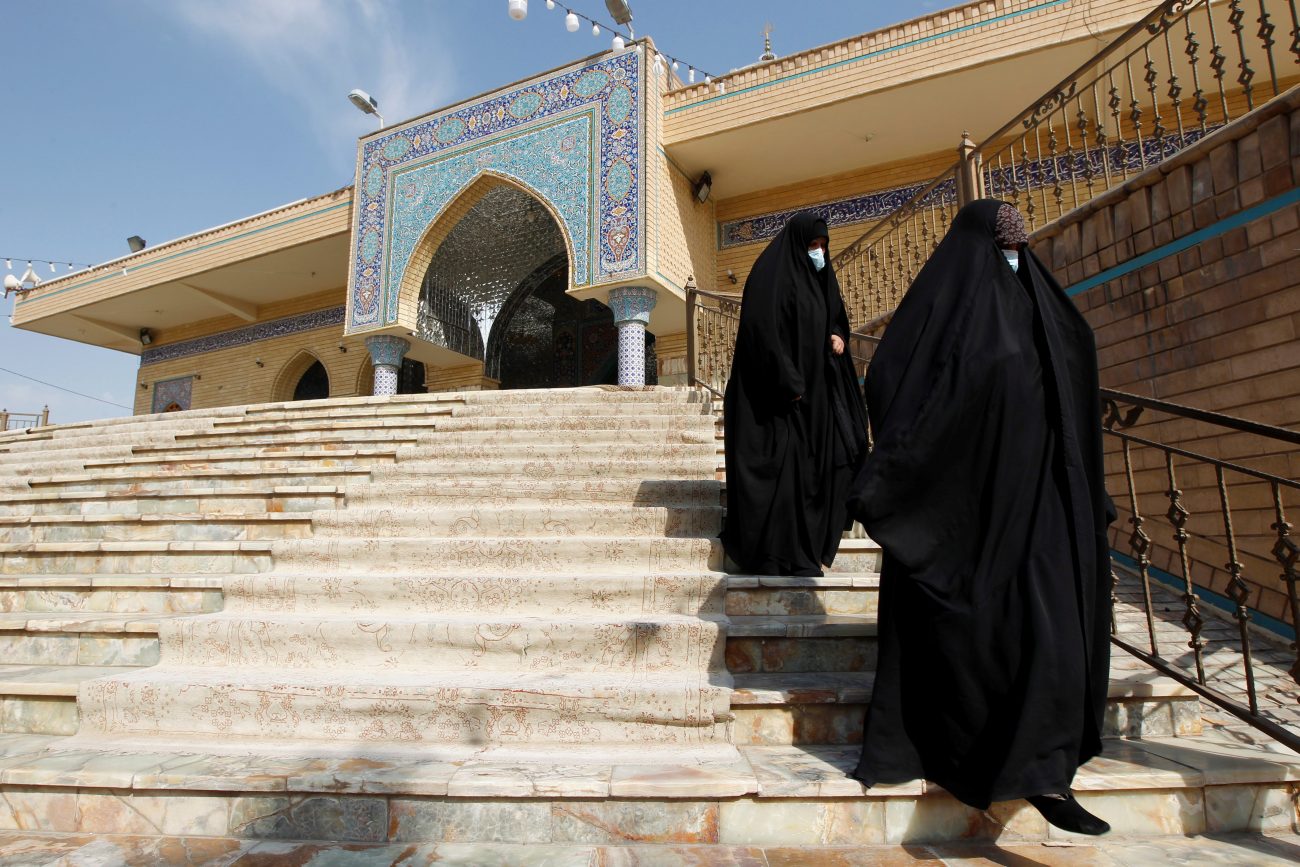 Women wearing protective face masks walk down stairs amid the COVID-19 outbreak in the holy city of Najaf, Iraq, Feb. 15, 2021. Strengthening precautions against the pandemic, the Iraqi government has ordered the closure of mosques and churches "until further notice." Pope Francis is scheduled to visit Iraq March 5-8 and has events planned in churches each day. (CNS photo/Alaa al-Marjani, Reuters)

VATICAN CITY (CNS) — Two days after the Iraqi government announced stringent COVID-19 precautions, including the closure of mosques and churches “until further notice,” the prime minister met with the Vatican nuncio to discuss “the preparation for the scheduled visit of His Holiness,” Pope Francis.

The Iraqi government announced the meeting of Prime Minister Mustafa al-Kadhimi and Archbishop Mitja Leskovar, the nuncio, in a tweet Feb. 15.

Pope Francis is scheduled to visit Iraq March 5-8, and he has events planned in churches each day.

The prime minister had chaired a meeting Feb. 13 of the Higher Committee for Health and National Safety, which responded to a rising number of coronavirus infections with new restrictions, including a “total curfew” Friday-Sunday and an 8 p.m.-5 a.m. curfew the rest of the week Feb. 18-March 8. Grocery stores, bakeries and pharmacies are exempt.

In addition to the closure of all mosques and churches, the government banned public funerals and weddings in event halls, and order the closure of hair salons, gyms, parks and cinemas for two weeks. Schools are to move to an online format and restaurants are allowed to provide delivery service only.

According to the Worldometer COVID-19 tracker, Iraq had been experiencing a daily increase of new coronavirus infections daily since Feb. 1. As of Feb. 15, the tracker said, Iraq had had a total of 643,852 cases since the pandemic began a year earlier and 13,179 people had died. With just over 23,000 active cases Feb. 14, the situation is much better than early October, when the number of active cases peaked at just over 63,000.

The Vatican did not comment on how the new restrictions would impact the planned trip — which could be postponed — or the activities of the pope, the small entourage of Vatican officials expected to travel with him and the 75 journalists accredited to the papal flight.

The pope and all those traveling with him have received or were to receive their second doses of the COVID-19 vaccine at least a week before the trip was scheduled to begin.

In line with current health recommendations, they still would be required to be tested for the coronavirus before boarding the flight and to wear approved face masks on the flight and while in Iraq.

In a meeting with members of Catholic News Service’s Rome bureau Feb. 1, Pope Francis said that unless there is a serious new wave of COVID-19 infections in Iraq, he had every intention of visiting the country in early March.

Even if social distancing requirements mean most Iraqis will see the papal events only on television, he said, “they will see that the pope is there in their country.”

“I am the pastor of people who are suffering,” Pope Francis told CNS.

NEXT: In Iraq, pope will see historic sites important to Christianity