Iraqi Catholics call it ‘miracle’ that pope will visit their city 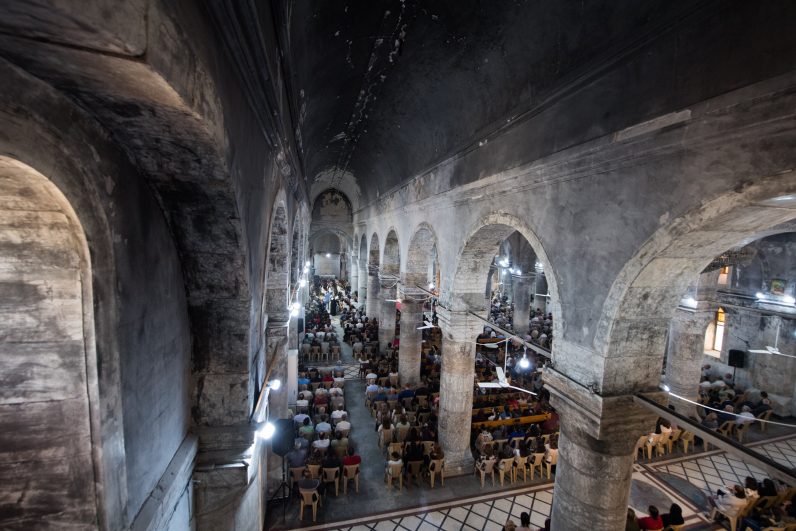 BEIRUT (CNS) — The largest Syriac Catholic congregation in the world is preparing physically and spiritually for Pope Francis’ upcoming visit to Qaraqosh, Iraq.

Father Momeka said Qaraqosh is bustling with activity, the streets already awash with papal flags and banners in preparation for the pope’s March 7 visit, part of his March 5-8 visit to Iraq.

Parishioners have been busy cleaning and painting the interior of the Church of the Immaculate Conception, transforming the blackened interior to its original radiance for the pope’s visit. The church, built by parishioners in the 1930s, had seating for 2,200 people. It was vandalized, desecrated and burned by the Islamic State.

Pope Francis is scheduled to pray the Angelus there.

In January, a new statue of Mary was erected atop the reconstructed bell tower, which had been demolished by the terrorists. Its presence affirms the trust that “the Virgin Mary will keep Qaraqosh safe,” Father Momeka said.

Inside, a nearly 7-foot image of Our Lady of the Immaculate Conception, embroidered by a Qaraqosh native who immigrated to the West, has been enshrined over the altar. 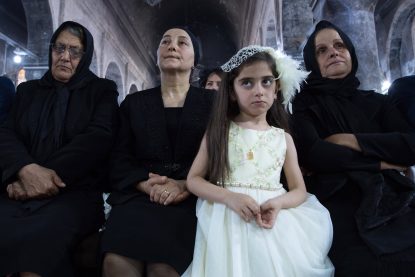 The Syriacs of Qaraqosh are also preparing spiritually for Pope Francis’ visit. On. Feb. 15, priests and nuns were to gather some 1,000 young people for an overview of Pope Francis’ teachings. Afterward, they will process through Qaraqosh with candles and a huge cross, singing hymns.

In the summer of 2014, the entire Syriac population of around 50,000 was uprooted in a single night by the Islamic State. They were among the more than 100,000 Christians expelled that summer from Mosul and Iraq’s Ninevah Plain. Qaraqosh, located 20 miles southeast of Mosul, was liberated from the Islamic State in 2017.

Approximately 27,000 people — slightly more than half of the uprooted population — have settled back in Qaraqosh from their exile in the Kurdistan region, where they had fled, living at first on the streets and in tents. Their homes were burned, looted and destroyed by the Islamic State. Some families remained in Kurdistan, and thousands have emigrated, scattered around the world, carrying with them their Syriac heritage.

“We thought that Pope Francis will go only to Baghdad and he will not come to the Ninevah Plain, but when we heard that he will come to Qaraqosh, the center of Christianity in Iraq, and the center of the Syriac Catholic Church, we feel so honored that Pope Francis is thinking about his sheep who were injured,” Father Momeka said. He added that the visit would encourage Christians to stay in Iraq.

In 2003, there were approximately 1.5 million Christians in Iraq. Their presence dates back to apostolic times. Now that number has dwindled to about 225,000.

Syriac Catholic Patriarch Ignace Joseph III Younan has referred to the faithful of Qaraqosh — also known by its Aramaic name of Baghdeda — as “the pearls for our church.”

To greet the pope in Qaraqosh, women and girls will be dressed in the traditional costume of the city, Father Momeka said. Such dress — intricately embroidered and featuring a kaleidoscope of brilliant colors — is typically reserved for celebratory events, such as weddings.

A special logo has also been designed for the pope’s visit to Qaraqosh, depicting the Holy Father wearing such a traditional stole. Beneath Pope Francis’ outstretched hand are scenes depicting the dramatic history of the people of Qaraqosh and their ancestors.

Father Momeka said Syriac Catholics are also proud that Pope Francis will visit the Syriac Catholic Cathedral of Our Lady of Deliverance in Baghdad March 5.

Islamic extremists stormed that church in 2010, killing two priests and 48 people during Mass.

Syriac Catholic Bishop Yousif Abba of Baghdad — a native of Qaraqosh — has already opened the cause for sainthood for the 50 martyrs.