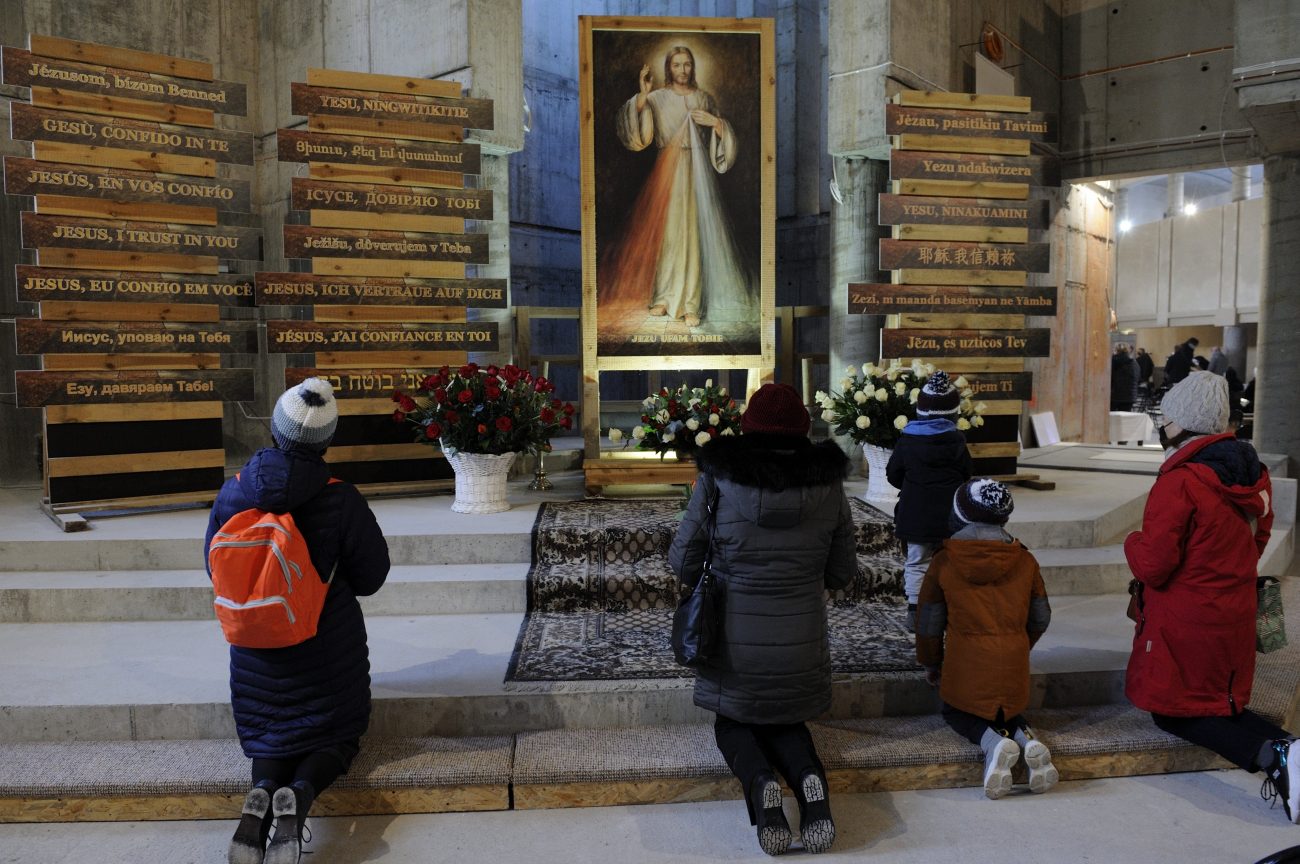 Pilgrims pray in front of an image of Jesus of Divine Mercy at the Divine Mercy Shrine in Plock, Poland, Feb. 22, 2021. A papal delegate celebrated a Mass at the shrine Feb. 22 to mark the 90th anniversary of the first apparition of Jesus to St. Faustina Kowalska. (CNS photo/Katarzyna Artymiak)

VATICAN CITY (CNS) — Marking the 90th anniversary of the apparition of Jesus to St. Faustina Kowalska, Pope Francis wrote a letter to Catholics in Poland expressing his hope that Christ’s message of divine mercy would remain “alive in the hearts of the faithful.”

According to a statement released by the Polish bishops’ conference Feb. 22, the anniversary of the apparition, the pope said he was united in prayer with those commemorating the anniversary at the Divine Mercy Shrine in Krakow and encouraged them ask Jesus “for the gift of mercy.”

“Let us have the courage to come back to Jesus to meet his love and mercy in the sacraments,” he said. “Let us feel his closeness and tenderness, and then we will also be more capable of mercy, patience, forgiveness and love.”

In her diary, St. Faustina wrote that she had witnessed a vision of Jesus on Feb. 22, 1931, while she was living at a convent in Plock, Poland.

Christ, she wrote, had one hand raised in benediction and the other resting on his breast, from which emanated two rays of light. She said Christ demanded to have this image painted — along with the words “Jesus, I trust in you” — and venerated.

Her sainthood cause was opened in 1965 by then-Archbishop Karol Wojtyla of Krakow, who — after his election to the papacy — would go on to beatify her in 1993 and preside over her canonization in 2000.

Recalling St. John Paul II’s devotion to St. Faustina Kowalska and Christ’s message of divine mercy, the pope said his predecessor was “the apostle of mercy” who “wanted the message of God’s merciful love to reach all inhabitants of earth.”

Pope Francis also marked the anniversary of the apparition during his Sunday Angelus address Feb. 21.

“Through St. John Paul II, this message reached the entire world, and it is none other than the Gospel of Jesus Christ, who died and rose again, and who gives us his father’s mercy,” the pope said.

“Let us open our heart, saying with faith, ‘Jesus, I trust in you,'” he said.