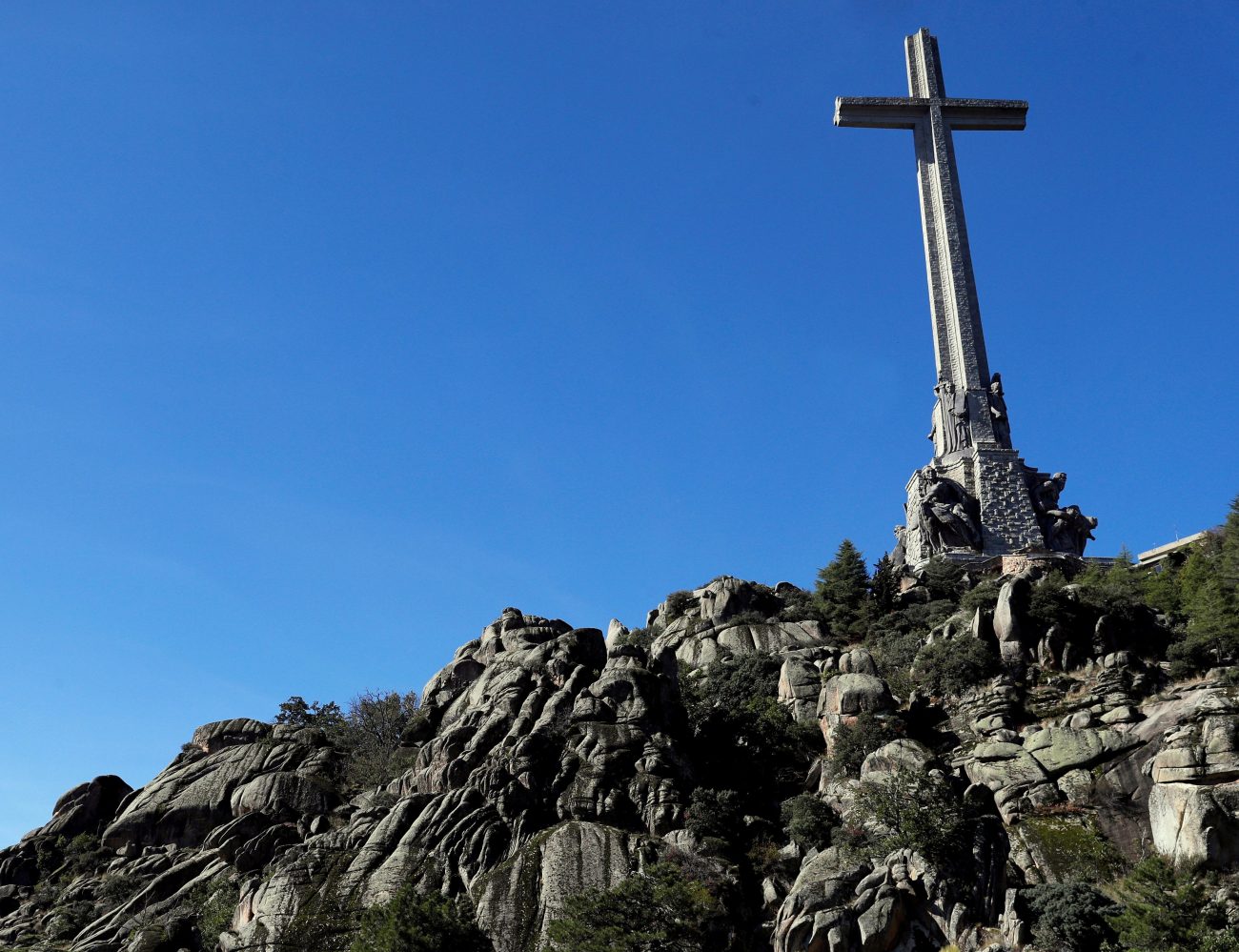 A large cross is pictured above the mausoleum where the tomb of former Spanish dictator Gen. Francisco Franco was located in the Valley of the Fallen near Madrid before it was exhumed Oct. 24, 2019. Spanish lawyers have taken action to prevent the removal of crosses by local officials, after claims that Christian symbols are linked with the country's former dictatorship. (CNS photo/Emilio Naranjo, pool via Reuters)

(CNS) — A group of Spanish lawyers has launched petitions and lawsuits to prevent the removal of crosses by local officials, after claims that Christian symbols are linked with the country’s former dictatorship.

“Many towns are being pressured to get rid of public crosses, which local people have spent weeks and months defending,” said Maria Riesco, spokeswoman for the Association of Christian Lawyers.

“We are checking the documentation and investigating each case, as well as maintaining a dialogue with regional governments in hopes of having them restored.”

Riesco, a Catholic, spoke as the Valladolid-based association announced legal proceedings against the mayor of Aguilar de la Frontera, near Cordoba, for ordering the demolition of a cross outside the town’s Carmelite convent.

In a Feb. 12 interview with Catholic News Service, she said the 20-foot concrete cross had been taken down illegally amid Catholic protests, in violation of religious freedom.

The press office of the Spanish bishops’ conference told CNS Feb. 12 the Association of Christian Lawyers was acting independently of the church. It said the conference would not comment on the removal of public crosses.

Meanwhile, Polonia Castellanos, lawyers association president, said action was also underway to protect crosses in Spain’s western Extramadura region, after at least 34 municipalities were ordered to remove them from streets and parks.

“The decision to demolish these monuments is purely ideological; if carried out, it would cause irreparable damage,” Castellanos said in a website statement, which noted at least 25,000 Spaniards had signed a protest petition. “Every time a cross is knocked down, we will bring the person responsible to justice.”

The cross in Aguilar de la Frontera, installed in 1938, was trucked to a landfill Jan. 19, after the mayor, Carmen Flores, argued it violated Spain’s 2007 Law on Historical Memory, which prohibits symbols deemed to praise the 1939-1975 rule of Gen. Francisco Franco.

In a Jan. 17 homily, Bishop Demetrio Fernández González of Cordoba warned officials Christians would take note of their actions at election time.

Meanwhile, the town’s parish priest, Father Pablo Lora Blasco, told parishioners in a Jan. 20 Facebook message the cross had been stripped of any political connotations in the 1980s, adding that he had tried unsuccessfully to explain its importance.

“A whole generation has grown up around the cross as a sign of love and commitment, forgiveness and mercy — I deeply regret the next generations will be deprived of this,” the priest said.

“I also express the pain of the Carmelite sisters and our parish community, who could have found another private site for the cross, so as to extol its deep meaning for Christians.”

Spain’s Law on Historical Memory is expected to be replaced this year by a 16-article Law on Democratic Memory, which will promote awareness of the country’s democratic history and push forward the exhumation of mass graves from the 1936-1939 Spanish Civil War.

The law also will facilitate sentence annulments and reparations for victims of repression, as well as for members of ethnic minorities and LGBT groups who suffered under Franco’s dictatorship.

Riesco told CNS that the Association of Christian Lawyers was particularly concerned about regulations at local and regional levels, which often were “much harsher” toward Christian symbols than national laws.

“Some state that any cross in a public place, whatever its inscription, exalts Franco’s regime and must be taken down,” she said.

NEXT: Pope marks anniversary of Christians martyred in Libya