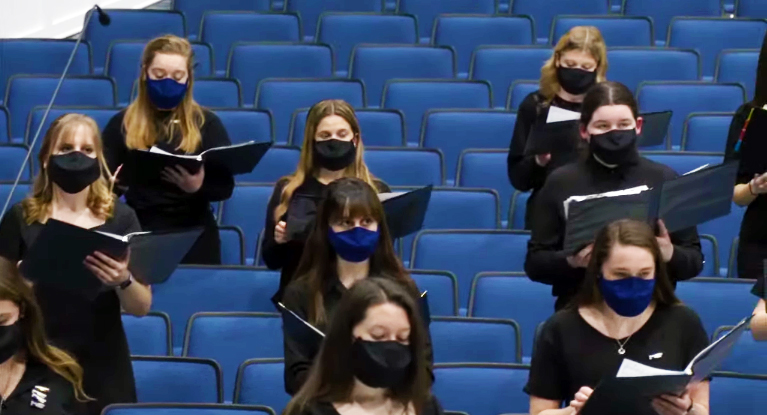 The show went online for top musicians from archdiocesan schools, who refused to let COVID silence a beloved annual tradition.

Despite limited in-person rehearsals, numerous technical considerations and the eerie silence of a room without an audience, the series has been “a beautiful step in the right direction, a step toward normalcy,” said Thomas Kuchler, director of performing arts at Conwell-Egan Catholic High School in Fairless Hills.

Kuchler joined school president Thomas Lynch in hosting a March 20 concert at Conwell-Egan by the All Catholic Chorus, whose 84 members were led by guest conductor Dr. Rachel Cornacchio, professor of music at Messiah College in Mechanicsburg.

The evening’s repertoire featured selections by Mozart and Rachmaninoff, as well as the African American spiritual “Walk in Jerusalem” and “How Can I Keep from Singing,” composed by Philadelphia native Robert Lowry.

Earlier this month, the three dozen members of the All Catholic String Orchestra performed works by Bach, Respighi, Lennie Niehaus (best known for scoring several Clint Eastwood films) and others via livestream from Archbishop Wood High School in Warminster. The March 6 program was directed by Joseph Lovecchio, conductor of the Warminster Symphony Orchestra.

Normally, concert performances are preceded by hours of ensemble rehearsals – but this year, the All Catholic musicians largely had to practice on their own, said Kuchler.

“The students of the participating schools worked so hard to prepare their music ahead of time,” he said, noting that the chorus members had “only one day of rehearsal” with guest conductor Cornacchio.

Even with such limited opportunity to practice, organizers were firm on proceeding with the concerts, said Immaculate Heart of Mary Sister Lauretta Linsalata, chair of the archdiocesan curriculum committee for the visual and performing arts, which oversees the groups.

The All Catholic events offer the chance to perform “with the best in each of the schools,” she said, while providing valuable opportunities to hone audition skills.

The scale of the ensembles is another draw, said Sister Lauretta.

“You may have a few students playing stringed instruments in a school group, but here they have the experience of playing with a full orchestra,” she said. “It’s the same with the chorus. The schools normally don’t have a full SATB (soprano, alto, tenor, bass) choir.”

The curriculum committee is looking to resume the “Concert of Excellence” at Verizon Hall in 2022, depending on the status of pandemic restrictions at that time, she added.

Until then, this year’s series will conclude with an April 11 concert by the All Catholic Concert Band, which will be livestreamed from Cardinal O’Hara High School in Springfield.

And while performing via livestream without an in-house audience is certainly “different,” said Kuchler, the opportunity to collaborate musically is a powerful one for the teens.

“The students were grateful to be able to sing together for the first time in over a year,” he said.