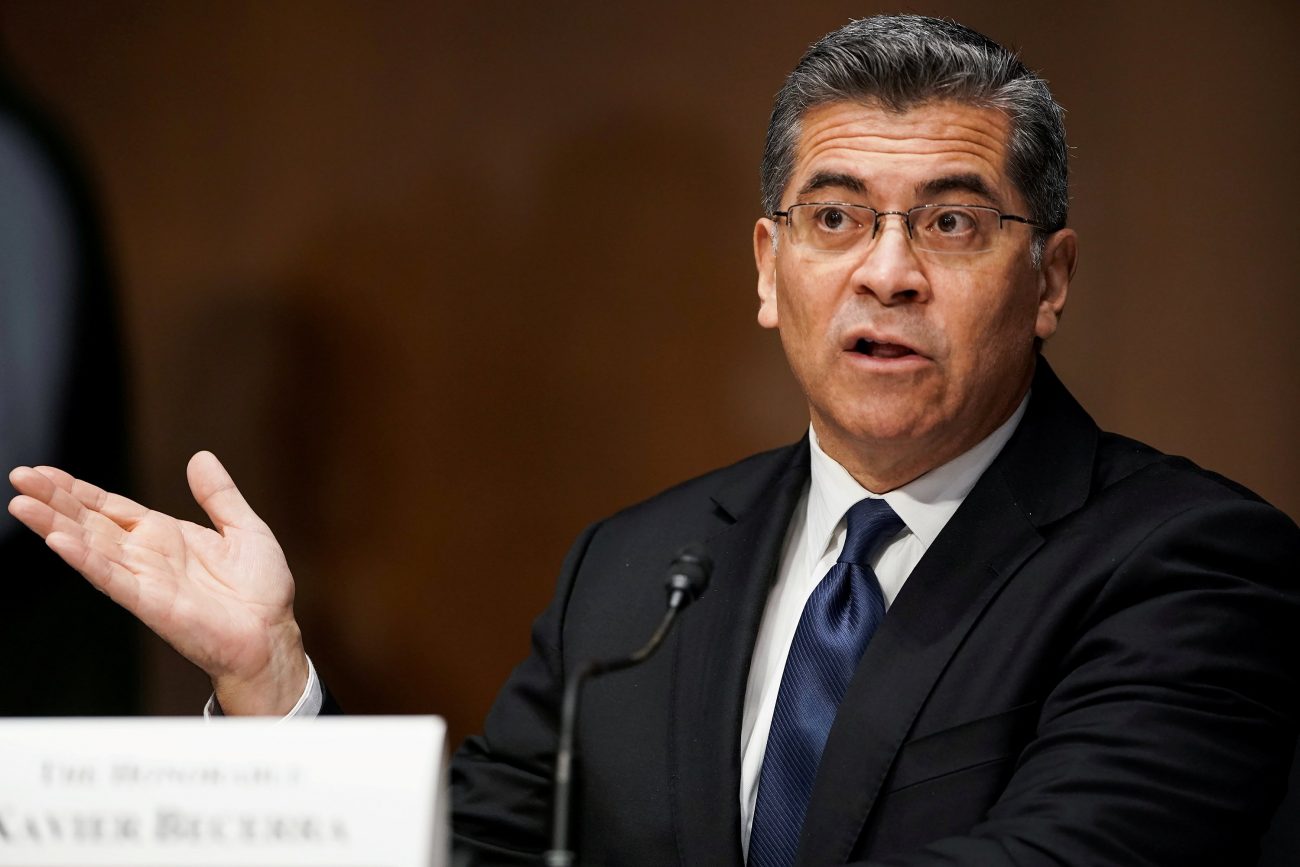 Xavier Becerra is seen on Capitol Hill in Washington Feb. 24, 2021. The Senate confirmed him as U.S. secretary of Health and Human Services March 18 in a 50-49 vote. (CNS photo/Greg Nash, Pool via Reuters)

WASHINGTON (CNS) — Once he is sworn in, Xavier Becerra, California’s former attorney general and a former member of Congress, becomes the first Latino to be secretary of the U.S. Department of health and Human Services.

In a narrow vote 50-49 vote March 18, the Senate confirmed him for the post, and he is expected to be sworn in sometime during the week of March 22.

His nomination by President Joe Biden brought heavy criticism from national pro-life leaders over his long record of support for legal abortion and for spearheading litigation to revoke the Little Sisters of the Poor’s religious exemption to the Affordable Care Act’s contraceptive mandate in the state of California.

Those who supported his nomination to head HHS said he has spent his career “fighting for underserved communities” and his efforts “to protect the welfare of immigrants and migrants.”

He also has been lauded for his efforts as a member of Congress to get the Obama administration’s ACA legislation through Congress in 2009, leading to its successful passage in 2010. As California’s attorney general, he has defended the ACA in court.

But National Right to Life and other pro-life groups who object to Becerra heading HHS point to the 100% rating by Planned Parenthood and NARAL Pro-Choice America’s for his record on abortion during his 25 years in Congress. About 60 pro-life leaders signed a Feb. 23 letter objecting to his nomination and urging the Senate to reject it; that letter followed a similar one they sent in December, shortly after Biden nominated him.

“Xavier Becerra is unqualified to lead the Department of Health and Human Services,” said Carol Tobias, president of National Right to Life, said in a March 19 statement. “His confirmation shows just how far the pro-abortion Democrats are willing to go to support abortion on demand and the demands of pro-abortion groups.”

Becerra “has no health care experience but plenty of abortion advocacy and he is being rewarded by the Biden administration for that extremism,” said Tobias. This lack of experience “disqualifies him from leading the nation’s health care agency,” which “plays a critical role in the distribution of the COVID vaccines and the production of those vaccines.”

National Right to Life and other pro-life groups who object to Becerra heading HHS point to the 100% rating by Planned Parenthood and NARAL Pro-Choice America’s for his record on abortion during his 25 years in Congress.

Among other actions as a House member, Becerra, a Catholic, voted against the Partial-Birth Abortion Ban Act, the Born-Alive Abortion Survivors Protection Act and the Pain-Capable Unborn Child Protection Act, which would prevent abortions after 20 weeks of pregnancy when, the bill said, “extensive evidence shows an unborn child is capable of feeling great pain.”

He also voted against the Conscience Protection Act of 2016, which would have prevented the federal government from denying federal funds to Catholic hospitals and other facilities that refuse to perform abortions.

The Catholic Medical Association is among those who object to Becerra as the head of HHS because of his record on abortion but the group also said there were “significant violations to religious freedom and conscience protections at stake in this nomination.”

In a March 16 letter sent to every member of the Senate ahead of the confirmation vote, the organization said: “With a Becerra confirmation, we can reasonably anticipate an unprecedented assault on our members’ ability to practice medicine according to sound medical judgment and the ethical principles of the Hippocratic Oath; a combination of science and principles that are ultimately in the best interest of each individual patient.”

Based on his record, it said, “there is ample evidence to suggest there will be zero tolerance for exemptions to HHS regulations in this administration, whether based on conscience or religious liberty.”

“We believe that Mr. Becerra will continue to vigorously promote not only elective abortion up to and including at the time of birth, but also the acceptance of infanticide when infants are born alive during failed abortion procedures,” the letter said. It also noted that Becerra as attorney general “fought vigorously” to defend California’s physician-assisted suicide law, the End of Life Option Act.

He argued the federal government was inserting itself into the state’s “sovereign duty” to protect women’s “reproductive rights.”

The religious order ultimately prevailed July 8, 2020, when the Supreme Court ruled 7-2 in their favor in a similar challenge from Pennsylvania. But California is still working to take away their exemption as upheld by the court.

NEXT: ‘Francis Factor’ still resonates eight years into his papacy