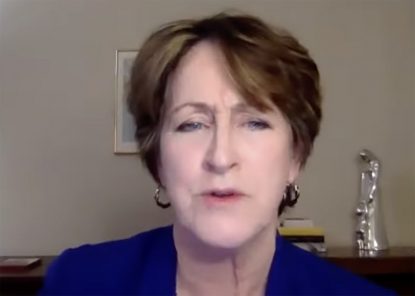 Mary Rice Hasson, director of the Catholic Women’s Forum in Washington, speaks during a nationwide webinar about the Equality Act and its repercussions for families, faith, and freedom. It was sponsored by the archdioceses of Los Angeles and New York, the dioceses of Arlington, Virginia, and Green Bay, Wisconsin, and the Catholic conferences of Colorado and Virginia. (CNS screen grab/YouTube, Catholic Diocese of Arlington)

WASHINGTON (CNS) — A March 22 online webinar on the Equality Act focused on criticism that the legislation is so vaguely worded it would harm religious liberty and obscure biological reality.

The measure would amend the Civil Rights Act of 1964 to prohibit discrimination on the basis of sexual orientation and gender identity in employment, housing, public accommodations, public education, federal funding, the credit system and jury duty.

The webinar was sponsored by the archdioceses of Los Angeles and New York, the dioceses of Arlington, Virginia, and Green Bay, Wisconsin, and the Catholic conferences of Colorado and Virginia.

On Feb. 25, the House of Representatives passed the Equality Act, also known as H.R. 5, in a 224-206 vote. Now it will be taken up by the Senate; the first hearing was March 17 by the Senate Judiciary Committee.

The webinar’s moderator, Ryan T. Anderson, who is currently president of the Ethics and Public Policy Center, said of the bill: “It’s overly broad and doesn’t define all kinds of actions that are truly discriminatory.”

Many of the webinar’s speakers cited Pope Francis’ 2016 apostolic exhortation, “Amoris Laetitia,” in which he said, “Biological sex and the sociocultural role of sex can be distinguished but not separated.”

Anderson said the Equality Act would take a “just law,” the Civil Rights Act, and add protections for sexual orientation and gender identity and also expand the number of institutions now classified as public accommodations.

The 1964 law banned discrimination on the basis of race, color, religion, sex or national origin.

In addition, Anderson said, the Equality Act exempts itself from the Religious Freedom Restoration Act of 1993, known as RFRA, which protects religions against government intrusion.

“If you get the nature of the human person wrong in law, then you’re going to see the consequences of privacy and safety in single-sex facilities,” he added. “We should not be using people who suffer from gender dysphoria as political pawns. Authentic compassion needs to be grounded in truth.”

Robert Vega, a policy adviser for the U.S. Conference of Catholic Bishops, noted: “Importantly, it does not limit its reach to those with gender dysphoria,” but also includes those who identify “any way at any time.”

Because Catholic schools, under the act, could be prohibited from receiving federal aid for needy students, he said, “single-sex schools might be completely out of the question.”

Jeanne Mancini, president of the March for Life Education and Defense Fund, said in a recent statement that the act would “set the tone for the Biden administration’s abortion extremism if passed.”

“Hidden behind a clever misnomer,” she said, “are policy changes that would require employers to provide abortion coverage in their health care packages, override conscience rights protections for religious institutions, and consequently undo many pro-life protections currently written into law.”

The act “compromises women’s identity, our safety and our opportunities,” said Mary Rice Hasson, director of the Catholic Women’s Forum in Washington, and “goes where no federal law has gone before. It erases sex.”

And “sex matters,” she added. “Only females go through puberty, get pregnant, give birth, breastfeed and go through menopause. That’s biology. No one can self-define into or out of biological reality.”

The law would be “the biggest and most aggressive action so far to push religious believers out of the public square,” said Gabrielle Girgis, a postdoctoral fellow at the Ethics and Public Policy Center in Washington.

Susan Muskett, a congressional liaison for the National Right to Life Committee, said under the proposed law, public school teachers would be required to address a child “by their new name and chosen pronoun even if it violates a teacher’s religious beliefs.”

“That means that Christian public school teachers could be fired for refusing to lie about a child’s sex,” she concluded.

Muskett also warned about public school curricula promoting “gender ideology with no opportunity for parental opt-out. The Judeo-Christian belief that God created us as male and female will be undermined throughout the entire public school system.”

“Just think of those innocent children being bombarded at their school with gender theory,” she said. “Many more children may become confused about their own gender identity.”

In written testimony for the Senate Judiciary Committee hearing, the Becket Fund for Religious Liberty discussed the U.S. Supreme Court’s June 15, 2020, ruling in Bostock, dealing with three LGBTQ employment cases. The court said employment discrimination on the basis of sexual orientation or gender identity is unlawful.

However, the court in Bostock “expressly relied” on RFRA “to balance the interests of religious believers and the LGBTQ community,” Becket said. “Congress has never before exempted a bill from RFRA, but the Equality Act would do just that.”

A couple days ahead of House passage of the Equality Act, the chairmen of five U.S. bishops’ committees said its mandates will “discriminate against people of faith” by adversely affecting charities and their beneficiaries, conscience rights, women’s sports “and sex-specific facilities.”

In a Feb. 23 letter to all members of Congress, they said the measure discriminates “against individuals and religious organizations based on their different beliefs by partially repealing” the bipartisan RFRA, which they called “an unprecedented departure from that law and one of America’s founding principles.”

On Feb. 26, House Republicans introduced a compromise measure called the Fairness for All Act. Supporters call it a commonsense bill that differs from H.R. 5 in that it would establish “much-needed civil rights for LGBTQ persons” and at the same time provide “robust protections for religious freedom.”

Also, unlike the Equality Act, the compromise bill says RFRA can be used “as a defense in court against allegations of illegal anti-LGBTQ discrimination.”