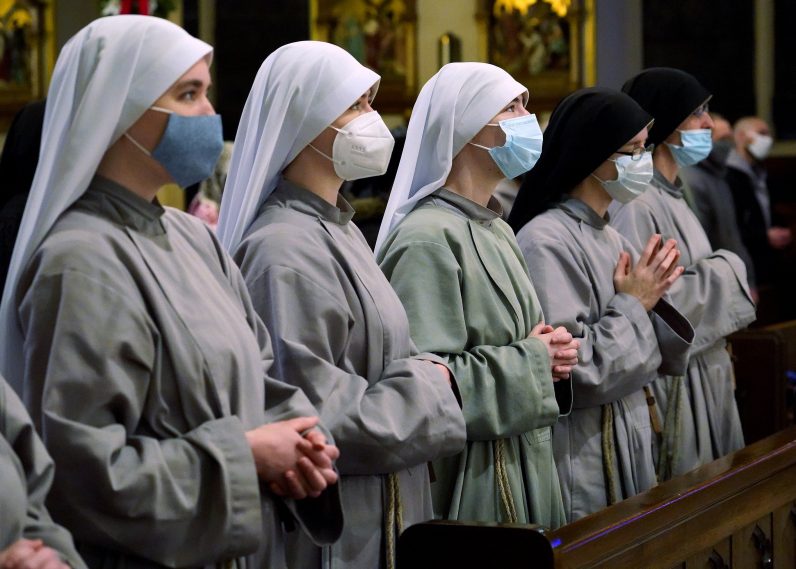 Members of the Franciscan Sisters of the Renewal pray during Mass Dec. 28, 2020, at the Church of the Holy Innocents in New York City. Catholic Sisters Week, a weeklong celebration of women religious, is March 8-14, 2021. The annual observance begins on International Women’s Day and takes place during Women’s History Month. (CNS photo/Gregory A. Shemitz)

WASHINGTON (CNS) — A new report on vocations to men’s and women’s religious orders from the Center for Applied Research in the Apostolate is filled with facts that can help everyone from pastors to formation directors foster more vocations.

But the report’s inclusion of many first-person vignettes of factors that helped and hindered their own vocation makes for compelling reading.

“The more recent cohort of women and men religious in the United States is more culturally and ethnically diverse than their older cohorts. While this diversity enriches religious life, it also challenges the leadership and the membership of religious communities to better welcome and adjust to the cultural changes in many aspects of their religious life together,” said the report, “Cultural Diversity in Vocations to Religious Life in the United States: A National Study of New Religious Members,” issued in February.

CARA sent surveys to 3,196 men and women in formation or new members in religious life, and got what it called “usable responses” from 1,163 of them, or 38%.

“White respondents make up two-thirds of those who have entered religious life since 2005, with the other third reporting ethnic backgrounds of Asian (12%), Hispanic (11%), Black (4%), and all ‘other’ ethnicities (5%),” the report said.

Five family-related factors were identified as having the most impact on a respondent’s vocation decision: Getting to know a priest or a religious brother or sister/nun besides family members, which 62% reported had “a great” impact; attending Masses or other religious services as a family, 60%; parents instilling a prayer life, 51%; actively participating in parish life as a family, 46%; and a sense of religiosity in the family, 45%.

“During graduate school for my MDiv (master of divinity degree), I left formation. While I am sure my parents were disappointed, they were supportive. 20 years later when I asked to reenter formation, my parents were also supportive,” said one respondent.

None of the respondents’ quotes were attributed, either by name or religious order.

“I remember myself cleaning with my father the bathrooms and floors of diocesan retreat houses and serving food with my mother in my local church, when I was 5 or 6 years old. This, alongside their prayer life and commitment to faith, was very important for me,” said one survey respondent.

But not all reminisces were so warm and fuzzy.

“My family resisted my vocation, and forced me to have a psychological consult by someone who was not connected to the church. Their lack of understanding about what a vocation was became the greatest challenge in helping them to come to see my desire to respond to the call,” said one respondent.

“My grandma at the beginning resisted the idea because she wanted grandchildren from me. An aunt thought I was wasting opportunities by becoming a sister,” another said. “My brothers thought I was crazy, I was possibly homosexual and they despise me and turned their back on me.”

Reported as having “some or great impact” were Masses and liturgies at the parish, reported by 88% of respondents. Second least likely to have an impact on discernment was religious vocation promotion events at the parish, at just 33%.

“I chose to live in the rectory of this parish to do a discernment year, so I was able to live, eat, and pray with the priests in common each day. I was also able to participate in various activities and help on the RCIA team. This parish is run by the religious order I joined,” one respondent said.

“The average family at my parish — and there were hundreds of families — did not even have vocations on their radar,” another said. According to a third, “They had a group for men discerning the priesthood, but nothing for women.”

Once in formation, culture clashes made themselves apparent — and sometime obvious — to some of those surveyed.

“I am Korean American. So, if I am accepted only as an American, then my brothers always only see me as half-self,” said one. One woman commented, “All this is almost always out of ignorance, not malice. Difficulty with being understood and a perceived lack of patience from U.S.-born sisters.”

One wrote, “I made Filipino food. One of my brothers from the Midwest walked through the door before we were going to say grace. He took one look at the food and then turned and said to me, ‘I am looking forward to having dog tonight.’ My jaw dropped. I could not believe the blatant racism, the lack of care especially since I spent so much time cooking, and the dismissive tone he said it in. Those kinds of experiences stay with me.”

Nor was this limited to ethnic and foreign-born Catholics in formation. “As a Southerner living with Jesuits from the Northwest, I sometimes find my home culture at odds with my adopted culture,” one man said.

One millennial wrote, “The perspective of the sisters seemed to be, ‘America is a culture of death.’ I find that contrary to my personal experience and it was very hurtful to me.”

Noted a second, “I am a millennial. The next youngest member of my community is older than my mother.” 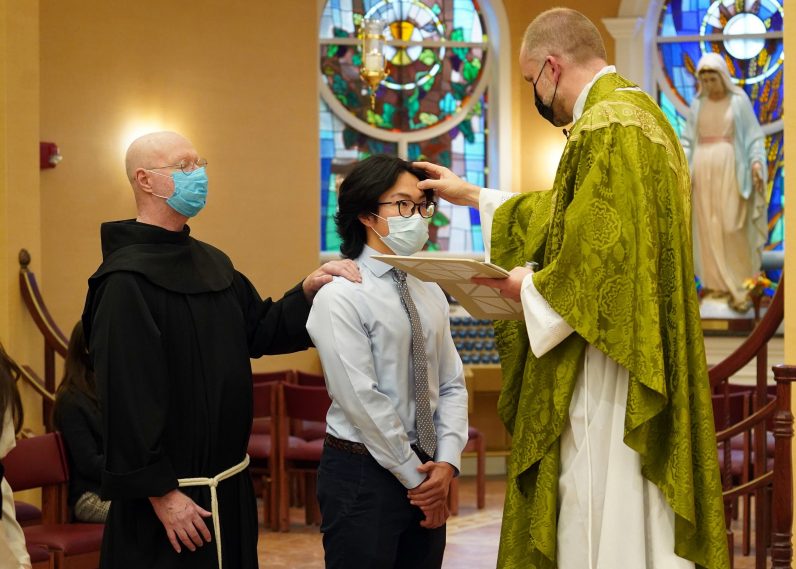 Moses Miao is joined by his sponsor, Franciscan Brother Gary Cregan, as he is confirmed by Father Lachlan Cameron at Christ the King Church in Commack, N.Y., Nov. 15, 2020. (CNS photo/Gregory A. Shemitz)