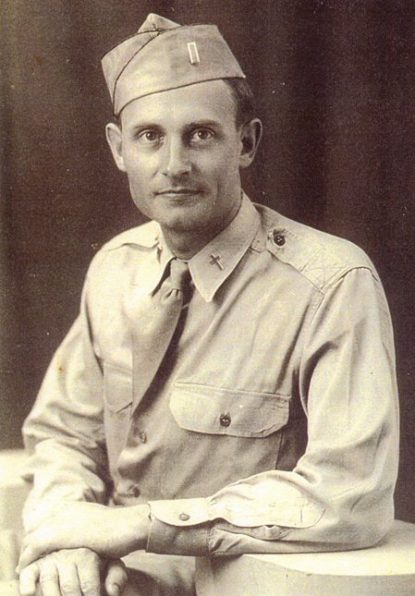 Father Emil Joseph Kapaun, a Kansas priest and a military chaplain, who died May 23, 1951, in a North Korean prisoner of war camp, is pictured circa 1943. A candidate for sainthood, he died ministering to prisoners of war during the Korean War. (CNS photo/U.S. Army courtesy The Catholic Advance)

WICHITA, Kan. (CNS) — William Hansen kept his silence for over 50 years about being one of the POWs who buried Father Emil Kapaun’s body after the priest died May 23, 1951.

In 2005, Hansen was in his doctor’s office at a VA Hospital in Florida when he read an article about the U.S. Army chaplain who died a hero in a North Korean POW camp in Pyongyang.

Scott Carter, coordinator of the Father Kapaun Guild for the Diocese of Wichita, said Hansen told his doctor that Father Kapaun was a fellow POW and he helped bury the priest.

Hansen said had never talked about his connection to Father Kapaun, Carter added, because he said he was sworn to secrecy about the matter by the U.S. Army.

“His doctor told Hansen that he felt it was OK with the Army now and that he definitely needed to contact them,” Carter told The Catholic Advance, Wichita’s diocesan newspaper.

A native of Pilsen, Kansas, Father Kapaun was ordained for the Diocese of Wichita June 9, 1940, and was a U.S. Army chaplain in World War II and the Korean War.

Although he could have avoided capture by the North Koreans, he allowed himself to be taken prisoner with his fellow soldiers. He heroically served his flock in the camp where he died.

“Hansen explained that Father Kapaun wasn’t buried in a mass grave like most of the POWS had assumed. That he was buried in the town behind one of the huts in kind of a lean-to,” said Carter.

As a result, it was more likely that Father Kapaun’s remains had been transferred when the remains of about 4,000 prisoners were exchanged as part of the 1953 Korean Armistice Agreement, Carter said. Over 800 of those were unidentified.

The identification of Father Kapaun’s remains was announced March 4, when the Defense POW/MIA Accounting Agency, or DPAA, stated that Department of Defense investigators had identified them among the unknown Korean War soldiers buried at the National Memorial Cemetery of the Pacific in Hawaii.

“I heard that they had made a lot of progress recently in their ability to extract DNA from the bones to identify these men,” Carter said. “In the last three years, they developed a new technique to extract the DNA.”

He added the agency hopes to have all of the remaining unknown soldiers identified in the next five or six years.

“The DPAA contacted Ray Kapaun, Father Kapaun’s nephew,” he said. “Thankfully we’ve got a great relationship with Ray and he contacted Father Hotze to share the great news. He quickly contacted the bishop and then told me as well.”

Father John Hotze is the postulator for Father Kapaun’s sainthood cause. The postulator is the official who presents a plea for beatification or canonization.

(See details about Father Emil Kapaun’s life and his cause for canonization at www.frkapaun.org.)

Carter said when he got the call March 4 from Father Hotze, he thought it might be a minor update from Rome.

“We knew they were working on the remains, but we still weren’t prepared to receive the good news,” he said.

About 95% of Father Kapaun’s skeletal remains were identified by the DPAA. “That is quite remarkable because a lot of the other remains they’ve been working on recently were just fragments from the battlefield,” Carter said. 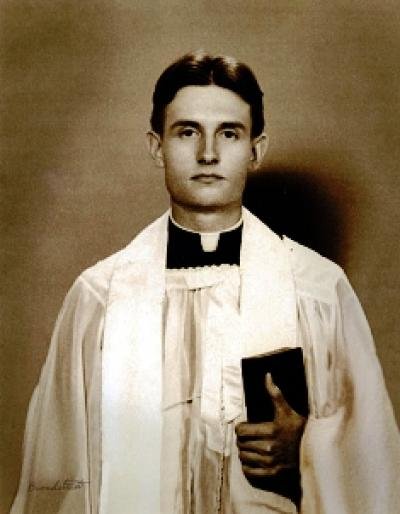 Father Emil Joseph Kapaun, a Kansas priest and a military chaplain, who died May 23, 1951, in a North Korean prisoner of war camp, is pictured in this undated photo. (CNS photo/courtesy The Catholic Advance)

The family is responsible for determining where the remains will be interred, he said, adding they also are interested in discussing the matter with the Diocese of Wichita.

“Even when he was alive, Father Kapaun gave his life to the church and he became a man for all,” Carter said. “Now that his cause for sainthood is under consideration, he’s much bigger than the diocese.”

Bishop Mark K. Carroll, Wichita’s bishop from 1947 to 1967, celebrated a memorial Mass in 1953 for Father Kapaun, he said, “but we’ve never been able to have an actual funeral or an actual burial.”

During that Mass, celebrated July 29, 1953, in the Cathedral of the Immaculate Conception in Wichita, Bishop Carroll said the faithful must be like soldiers, that Christ died for the truth. “Not in all history can we find anything to equal the heroism of Christ the soldier.”

A priest is the vicar of Christ, he said. “The work of a priest is the same as that of Christ. He is to be an apostle of love and the ambassador of peace, and at the same time he is to be preeminently a soldier of Christ, the captain of souls … fighting error and superstition and the sinful spirit of the world.”

Carter said now that the remains have been identified, many other details regarding the status of his cause and Father Kapaun’s remains will be discussed.

“When I heard that his remains were coming I was super-excited, but at the same time the thought about Father Kapaun’s last words to his fellow prisoners: ‘Hey guys, don’t worry about me. I’m going to where I always wanted to go. And when I get there, I’ll say a prayer for you. And tell my bishop I died a happy death.'”

Riggs is editor of The Catholic Advance, newspaper of the Diocese of Wichita.

NEXT: Businesswoman who is gospel singer, author to receive Laetare Medal