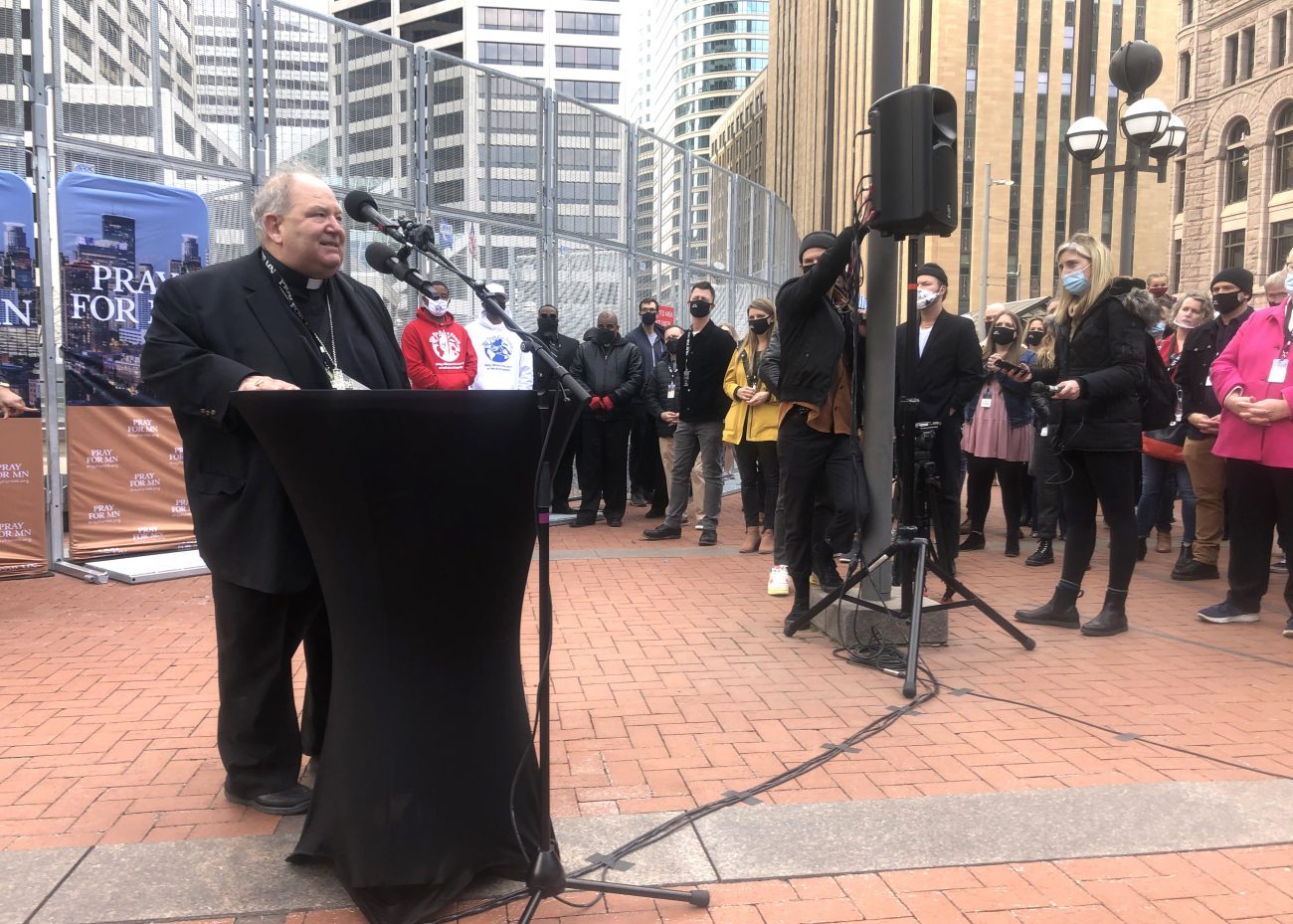 Archbishop Bernard A. Hebda of St. Paul and Minneapolis leads a prayer at the Hennepin County Government Center during a gathering of pastors and clergy March 7, 2021, ahead of jury selection in the trial of former police officer Derek Chauvin, who is up on murder charges in the death of George Floyd while in police custody May 25, 2020. Chauvin is white and Floyd was Black. (CNS photo/Dave Hrbacek, The Catholic Spirit)

MINNEAPOLIS (CNS) — Archbishop Bernard A. Hebda of St. Paul and Minneapolis prayed March 7 for peace and justice in the upcoming trial of a white former city police officer charged in the death of George Floyd, an African American. He died while in police custody last May.

The archbishop gathered with over 100 other faith leaders in a downtown Minneapolis plaza.

“Loving God, you are the source of all that is good in our lives,” Archbishop Hebda said in the gathering’s opening prayer. “And so, we come to you with grateful hearts, grateful for the gifts that you’ve bestowed upon those that are gathered here. Grateful for the plans that you have for our cities. Grateful for the way in which you are going to bless us beyond anything that we can imagine.

“We come to you today as a people who thirst for justice, but we hunger as well for peace.”

Jury selection was to begin March 8 in the murder trial of the former officer, Derek Chauvin, but legal complications delayed it for a day, as the issue of an additional murder charge for Chauvin was pending.

He has pleaded not guilty to two charges — second-degree unintentional murder and second-degree manslaughter. A third charge of third-degree murder was dismissed in October, but an appeals court ruled the trial judge should reconsider a motion to reinstate it.

On March 11, Hennepin County District Judge Peter Cahill allowed prosecutors to reinstate a third-degree murder charge against Chauvin, which the judge had ruled in October was not applicable in this case.

In light of a ruling on a third-degree murder charge in a separate case in February and at the request of prosecutors, the Minnesota Court of Appeals ordered Cahill to consider reinstatement. On March 10, the Minnesota Supreme Court refused a request by Chauvin’s attorney to review the appellate court’s decision, clearing the way for Cahill’s decision. 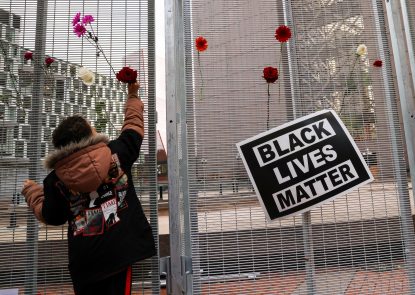 A child in Minneapolis places a flower on a fence near a “Black Lives Matter” placard during a rally March 7, 2021, the day before jury selection began in the trial of former Minneapolis police officer Derek Chauvin, who is accused of killing George Floyd. (CNS photo/Leah Millis, Reuters)

The March 7 gathering of faith leaders was organized under tension felt across the Twin Cities. Their backdrop was security fencing at the North Plaza of the Hennepin County Government Center, where Chauvin’s trial will be held. A sign that read “Pray for MN” could be seen behind the podium and loudspeakers.

Floyd’s May 25 arrest, part of which was captured on video by a bystander and shared with social media, sparked protests and riots across the Twin Cities and around the country.

Chauvin was shown during the arrest putting his knee on Floyd’s neck for nearly nine minutes as Floyd, handcuffed and face down on the ground, begged to breathe and then became unresponsive. He was pronounced dead at a hospital.

Floyd had been accused of trying to pass a counterfeit $20 to buy cigarettes.

Chauvin was fired after the incident. Three of his colleagues also were fired and they face a joint trial Aug. 23 on charges of aiding and abetting second-degree murder and manslaughter. All four defendants are out on bond.

In addition to the prayer gathering, Archbishop Hebda released a video and statement March 5 asking for prayers throughout Chauvin’s trial.

“Whether you can take 30 seconds or 30 minutes, let us commit to praying each day for peace in our communities, peace for the Floyd family, and peace for our first responder sisters and brothers working to protect us. Please join me as well in praying for an end to the scourge of racism in our country,” the archbishop said in the video and in his statement, both of which are on the archdiocese’s website, https://www.archspm.org. 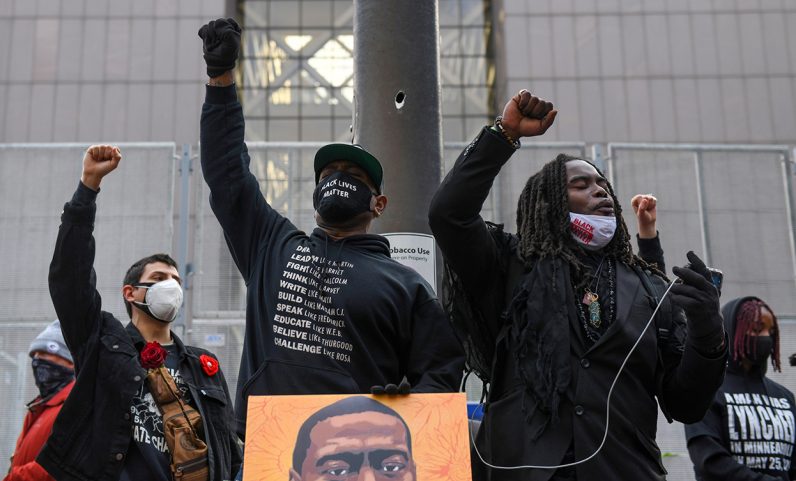 Protesters in Minneapolis chant “I Can’t Breathe” March 7, 2021, one day before jury selection began in the trial of former police officer Derek Chauvin. George Floyd, an unarmed Black man, was pinned down by Chauvin kneeling on his neck before later dying in the hospital May 25, 2020. (CNS photo/Nicholas Pfosi, Reuters)

NEXT: U.S. bishops find ‘comfort in God’s promise’ in year of pandemic