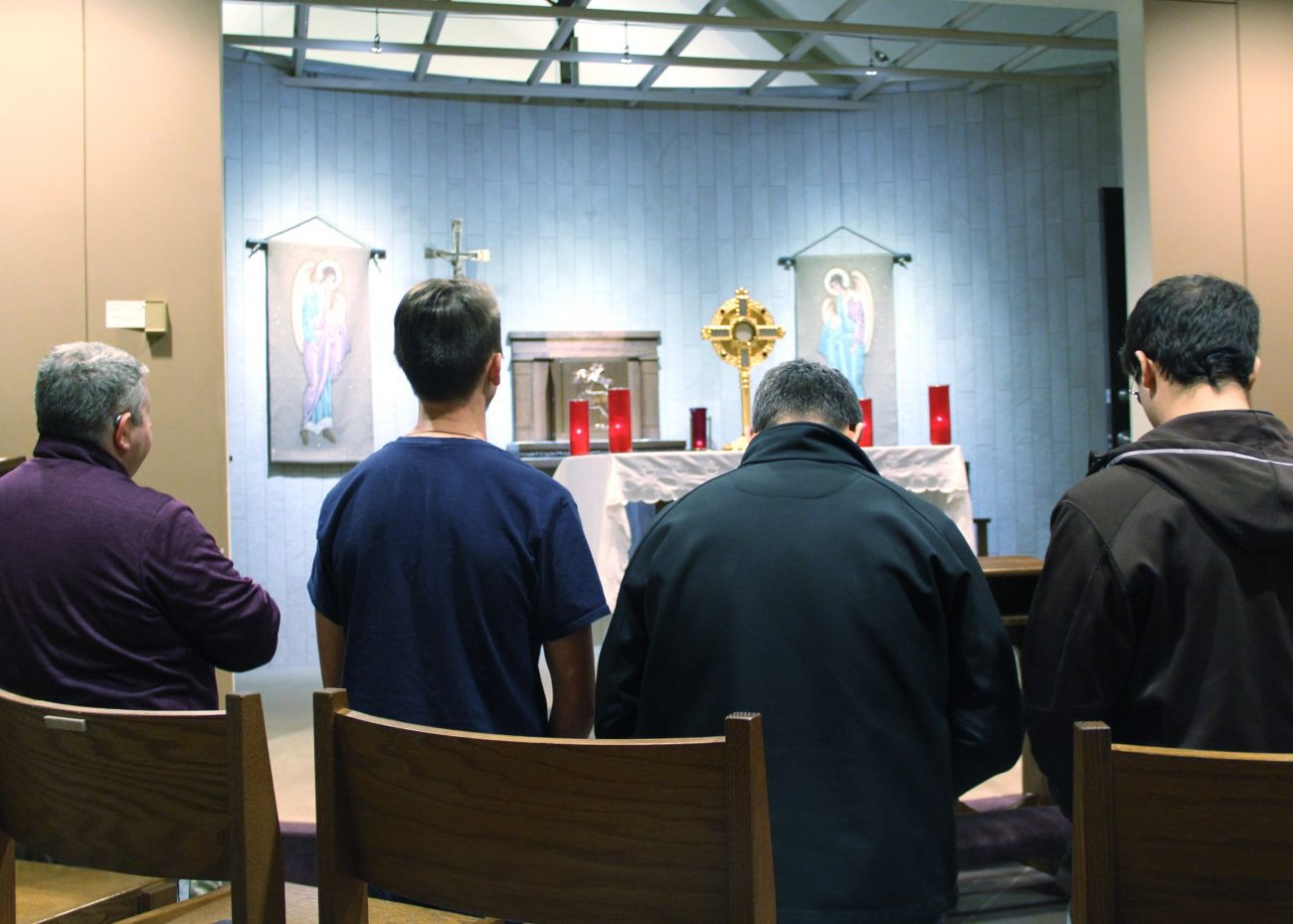 Men at Sacred Heart Church in Warsaw, Ind., participate in an Exodus 90 session Feb. 19, 2020. Exodus 90 is a set of spiritual exercises meant to help men overcome habits, distractions and addictions in order to refocus on the Lord and their families. Prayer, fraternity and self-discipline are pillars of the experience. (CNS photo/Jennifer Barton, Today's Catholic)

FORT WAYNE, Ind. (CNS) — Three months of cold showers and no alcohol, soda, dessert or televised sports: It sounds less like Lent and more like a military boot camp.

Who would volunteer for such an experiment in austerity? Tens of thousands of men, it turns out.

Exodus 90 was the fruit of a priest’s prayer and vocational experience, according to co-founder and executive director James Baxter.

The powerful 90-day spiritual exercise employs a regimen of daily prayer, asceticism and fraternity to bring men back to the foundations of their faith, stripping them of worldly addictions and reinvigorating their devotion to Christ.

(Learn more at exodus90.com or download the app from app.exodus90.com, Google Play and the App Store.)

In 2011 Father Brian Doerr of the Diocese of Lafayette-in-Indiana was appointed vice rector of human formation at Mount St. Mary’s Theological Seminary in Emmitsburg, Maryland.

Over the next couple of years, he came to know well the seminarians who were in formation and the people and things they cared about, what they struggled with and what they looked forward to in ministry.

He realized that many of them, although fervent and well-intentioned, were not as free as they could be as they approached ordination to the priesthood.

There were crutches they used to get themselves through tough moments. Some had addictions, and like most people they tended to engage in time-wasting habits like binge-watching Netflix or social media scrolling.

He issued a 90-day challenge to five struggling seminarians, re-presenting to them the tradition of the early Catholic Church and her emphasis on asceticism. The 90-day length of the commitment is based on the scientific understanding of the length of time it takes to return the brain to unlearn a bad habit or form a new one. 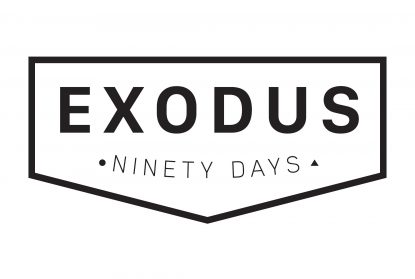 This is the logo for Exodus 90, which is a set of spiritual exercises meant to help men overcome habits, distractions and addictions in order to refocus on the Lord and their families. Prayer, fraternity and self-discipline are pillars of the experience. (CNS photo/Exodus, Inc., via Today’s Catholic)

The experience of the initial group of seminarians was so fruitful that Father Doerr went on to launch the spiritual exercises with 10 additional groups over the next three years. In 2016, he shared online an invitation to participate and the challenging and profound spiritual re-orientation went public among the Catholic faithful.

Over 30,000 laymen, priests and bishops in 65 countries have undergone the prayer-led, paradigm-shifting journey to true freedom that releases them from deeply personal habits, distractions and even addictions that they often didn’t even realize were preventing them from fully receiving the graces and gifts of God.

Some say it’s the hardest thing they’ve ever done. But around halfway through, participants begin to show up at their weekly fraternity meetings with a distinctly different attitude.

“Toward the end, certainly the joy is increased,” said Nathaniel Bienversie, Exodus Inc. director of content, who works with Baxter and a small staff to coordinate and promote the grassroots ministry from an office in Fort Wayne. “You can see the fruits. It’s hard to see when you’re in the middle of it, but by Day 91 it’s definitely there.”

The essentials of Exodus 90 are brotherhood and submission to the regimen. Participants are accountable to the brotherhood, or fraternity, which is gender-restricted so the men feel free to express true vulnerability, which in turn leads to growth.

Each man’s fraternity consists of other men who are submitting to the exercises at that moment in time.

The disciplines of Exodus 90 are not to be altered, because the temptation to insist on having control over certain situations is one of the reasons men fail to become free. Control must be surrendered to the Lord.

“That’s something we realized as time went on,” Bienversie told Catholic News Service. “Even myself, the first time I went through Exodus 90 … at the time I was working as a FOCUS campus missionary and one of the things I hadn’t wanted to spend money on was alcohol.

“But about a month into it, I started thinking, ‘Man, I really want a beer and I’m angry I can’t have one.’ This happened night after night after night, and I asked myself, ‘Why am I angry?’ It’s because I had to give up that control over that distraction.”

The list of control-busting, holy sacrifices is a little longer than a dozen. Short, cold showers; no alcohol, no desserts or sweets; no eating between meals; no soda or sweetened drinks; no television, movies or video games; only music that lifts the soul to God; no televised sports without permission of the fraternity; use of computers and phones for research and communication purposes only; regular and intense exercise; a daily holy hour (minimum of 20 minutes of silent prayer each day); attendance at weekly fraternity meetings; no nonessential purchases; observation of regular days of fasting; and getting a full night’s sleep.

The leadership team of Exodus Inc. invites men to consider beginning the paradigm-shifting journey 90 days before Easter, a time Catholics tend to be “liturgically hard-wired” for reflection and penitence, Bienversie said. But starting at different time of the year is fine too.

The day after the exercises — the time of purification — ends, the time of formation begins. For a three-year period called Day 91, fraternities continue to support each other in maintaining a life of prayer and moderated asceticism.

“That aspect of fraternity is so important. We just cringe when we hear that someone has decided to try and go through it alone,” said Bienversie. “That’s pride, then it just isn’t as transformational of an experience.”

Scott Hansen of the Diocese of Des Moines, Iowa, has gone through Exodus 90 twice. When he began the second time, he noticed he wasn’t feeling as “on fire” about his faith as he had in the past.

During moments of prayer, he would frequently ask God where he had turned away from his will. The answer seemed to come back to moments of frustration, both at work and at home.

“I struggled in those moments to respond with charity and would frequently find myself boiling over with anger,” he said.

“One of the Exodus reflections refutes the saying, ‘God doesn’t give you more than you can handle,’ and instead suggests that God doesn’t put us into a situation without also supplying the grace to get through it,” Hansen said. “I realized that this also related to my brief day-to-day moments of frustration, and that these moments were actually opportunities for grace.”

Marlin is editor of Today’s Catholic, newspaper of the Diocese of Fort Wayne-South Bend.

NEXT: Ahead of papal trip, prelates urge solidarity with pope and Iraq