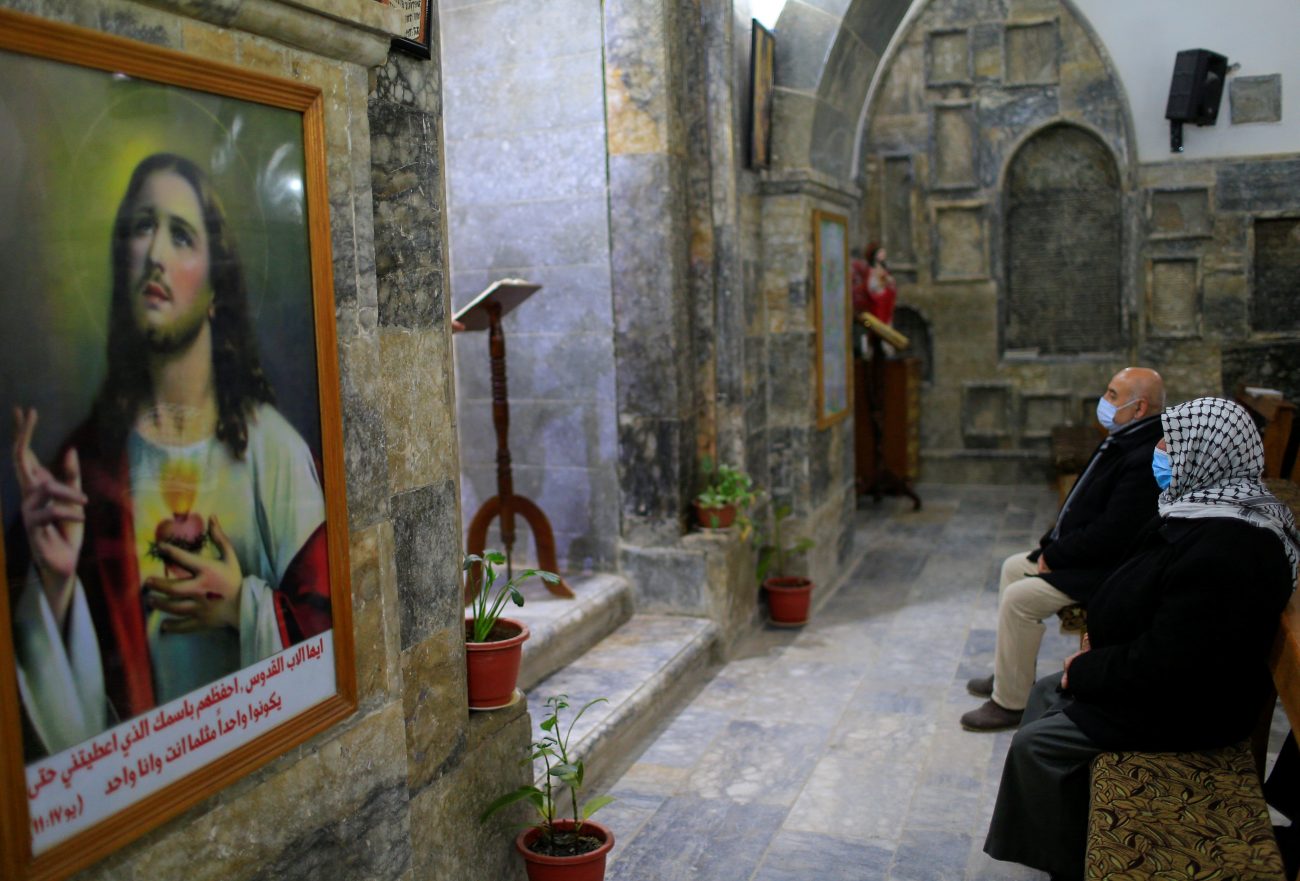 Worshippers attend Mass at the Church of the Immaculate Conception in Qaraqosh, Iraq, Feb. 23, 2021. Pope Francis plans to Qaraqosh March 7 during his March 5-8 trip to Iraq. (CNS photo/Thaier al-Sudani, Reuters)

PHOENIX (CNS) — The 1,200 Chaldean Catholic families who live in Arizona are thousands of miles from the land of their birth.

On March 5, their hearts will turn toward their native Iraq.

That day, Pope Francis will arrive in Baghdad, the capital of the Middle Eastern nation that has been torn by war, violence and religious persecution for decades. It marks the first time a pope has ever traveled to the land of Abraham, Isaac and Jonah.

Appropriately, the visit takes place during Lent, or Soma in modern Aramaic, the language of the ancient Christian community. The modern city of Mosul, built on the Ninevah Plain, is the city where Jonah preached repentance and the king sat in sackcloth and ashes and called for a fast.

Auxiliary Bishop Basel Yaldo of the Chaldean Catholic Patriarchate in Baghdad, said the visit of Pope Francis is significant in that it will encourage people to work together to achieve peace and will also raise awareness about the presence of Christians in Iraq.

“The pope’s visit will guarantee visibility to Christians by giving great significance and relevance to their presence in this part of the world and their suffering throughout history,” Bishop Yaldo told The Catholic Sun, newspaper of the Latin-rite Diocese of Phoenix.

“We actually hope to see the outcome of this visit change Iraqis to be an open-minded nation, especially by restoring the spirit of youth and living happily together, building their country and securing a better future for the next generation,” added the bishop, who in the 2000s served at a Chaldean Catholic parish in Detroit.

He was elected by the Synod of Bishops of the Chaldean Church to be auxiliary bishop for Baghdad in January 2015. 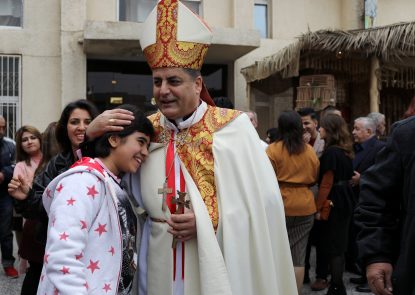 Maida Shabo fled Iraq after the first Gulf War and now makes her home in Gilbert, Arizona, with her husband, Basil, and their three children. She still stays in touch with family back home, especially a cousin who is a priest and who will take part in a papal Mass.

“The whole country is excited. The Christians over there — they have so much faith and to them, it’s like Jesus is coming to visit. It’s not right, but that’s how they feel,” Shabo said. “They have been through so much and this visit is just like God’s answer to them.”

Raad Delly lives in Scottsdale and has been in the U.S. since 1980. His cousin, the late Cardinal Emmanuel-Karim Delly, who was the Chaldean patriarch, visited Arizona and met with Phoenix Bishop Thomas J. Olmsted in 2013.

“It’s a great thing that the pope is visiting Iraq. We are hopeful for peace because he is going to meeting with the leader of Islam, (Grand Ayatollah Ali) al-Sistani. which is a good thing. We are hoping for a message of forgiveness and reconciliation.”

Like Shabo, Raad also hopes the visit will raise awareness about the presence of Christianity in Iraq.

“I have so many people asking me, ‘When did you convert?'” Shabo chuckles. “I say, ‘I can’t tell you, because my ancestors were some of the first Christians. So there was no conversion there unless you are talking about pagans into Christianity.'”

Over 500,000 Chaldeans live in the United States today, with large communities in Detroit and San Diego.

The Christians of Iraq trace their origins to the ministry of St. Thomas the Apostle who traveled to the region in the first century. Then, as now, Christians have been beleaguered.

“Some people are worried,” Shabo said. “The country is not stable, so that’s an issue. I hope everything will go easy and smooth and that nothing happens.”

Father Ray Sarkees, pastor of Mar Abraham Chaldean Catholic Church in Scottsdale, said Pope Francis “has a message for all Iraqis, and especially for the Christians living in Iraq and that region.”

“It’s a message of hope that although we are living in a bad economic and security situation in the country, still there is hope that things will be changed for the better,” he said.

Beyond that, Father Sarkees said, Pope Francis will bring a message of reconciliation aimed at “the different parties that are ruling inside the country — to have some peace and reconciliation between them and show they are brothers and sisters, that they are first of all human beings and also all citizens of that country whether they are Christians or Muslims or Kurdish or Yazidis.”

The Islamic State of Iraq and Syria — now known as the Islamic State, or IS — overran the Ninevah Plain in August 2014, forcing tens of thousands of Christians and Yazidis to flee. Scores were killed or kidnapped. A deadly 2010 massacre at Our Lady of Deliverance Catholic Church in Baghdad led to the death of 58 people, including two priests. Father Sarkees knew both.

“Both who died there, they were my friends. I knew them from the seminary,” Father Sarkees said. “They were martyred, they were killed and a lot of people attending the Mass were killed. But still, God will bring from this tragic time something good.”

Pope Francis will meet with Grand Ayatollah al-Sistani in Najaf March 6 and then travel to Nasiriyah for an interreligious meeting at the plain of Ur where he is expected to promote dialogue and coexistence among all parties, Bishop Yaldo said.

“When the visit was confirmed officially, the majority of Muslims in Iraq were excited, the same as Christians. The meeting between Pope Francis and the Grand Ayatollah Ali al-Sistani in Najaf will be historical and we expect to impact on solidarity and coexistence,” Bishop Yaldo said.

Pope Francis also will travel to Irbil in northern Iraq. On hand for the historic papal visit will be Bishop Felix Shabi, who once led the Eparchy of St. Peter the Apostle’s Vicariate of Arizona and who was installed as bishop of Zakho in northern Iraq last June.

Coronel writes for The Catholic Sun, the online news outlet of the Diocese of Phoenix.