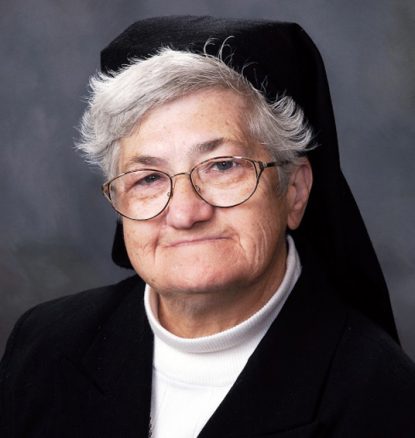 A native of Philadelphia, she was raised by her mother, Mary (Kuen) Coleman, after her father Edward James Coleman died in 1944 serving in World War II. She attended St. Boniface School in Philadelphia and graduated from John W. Hallahan Girls’ High School in 1963.

She entered the Sisters Servants of the Immaculate Heart of Mary in 1963 and received her religious habit and religious name, Sister Edwardine Marie, in 1964. She pronounced her first vows in 1966.

Sister Edwardine’s first assignment was at SS. Simon and Jude School and Convent in Westtown for several months before a need arose and she was sent to St. Clement in Philadelphia for the next three years.

In 2006 Sister Edwardine assisted in the library at St. Veronica School, Philadelphia for one year followed by seven years at St. David in Willow Grove teaching religious enrichment.

In 2014 Sister Edwardine volunteered at Camilla Hall until 2017 when her health began to diminish and she moved her residence from Pacis Hall to Camilla Hall as a patient and in the Apostolate of Prayer until her death.

She is survived by her beloved Aunt Emma and loving cousins, and by her I.H.M. congregation. She is predeceased by her parents.

The funeral Mass was celebrated March 16 in Camilla Hall by Father Michael Gerlach.

NEXT: Father Marshall Kloda dies at 75