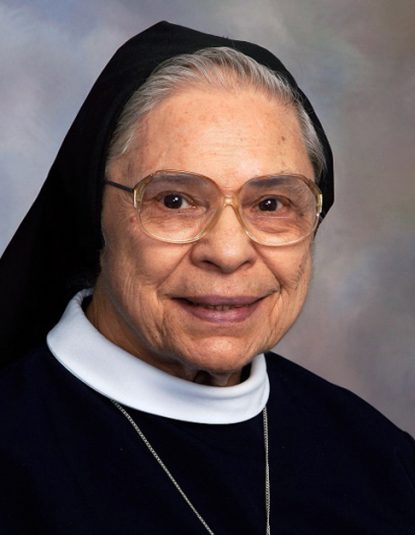 Rose M. Habina was one of four children of Louis Bela — a native of Hungary — and Mary (Ruffi) Habina in St. Stephen Parish in McAdoo, upstate Pennsylvania.

She attended St. Patrick School followed by McAdoo High School from which she graduated in 1948. Upon graduation she attended Immaculata College for one year followed by three years at Temple University, earning an A.B. degree in psychology.

She entered the Sisters Servants of the Immaculate Heart of Mary in 1955, received her religious habit and religious name, Sister Marian David, the same year and pronounced her first vows in 1957.

Later while in the community she earned an M.A. degree in psychology from the Catholic University of America in Washington, D.C.

Sister Marian transitioned from teaching to an “assisting” ministry, in particular in the infirmary at Camilla Hall, the Activities Office at Little Flower High School in Philadelphia, the English Department at Bishop McDevitt High School in Harrisburg and the Studies Office and library at Holy Name High School in Reading.

While Sister Marian was at Holy Name, her mother’s health deteriorated to the extent that she needed constant care which she provided from 1988 to 1992. After that time until 1994, Sister Marian assisted in the library at Cardinal Dougherty High School, Philadelphia.

She then resided at Pacis Hall with service at Camilla Hall until her health took a downturn and she became a full-time resident of Camilla Hall in August 2001. Sister Marian David served devotedly at Camilla for as long as she was able. Shortly after her 90th birthday, she succumbed to the ravages of cancer.

She is survived by nephews, nieces, grandnieces and grandnephews, her community at Camilla Hall and her I.H.M. congregation. She is predeceased by her parents, her brothers Christopher John (Frances) and Louis Stephen (Olga) and her sister Marie Kessler (Daniel).

The funeral Mass was celebrated March 10 at Camilla Hall by Father Terry Odien.