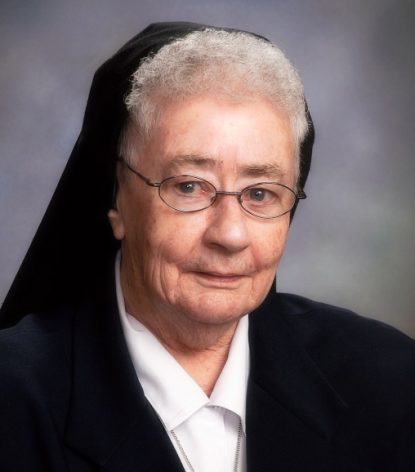 Sister Miriam Dennis Sculley, I.H.M. died Feb. 25 in Paoli Hospital at age 89 in the 69th year of her religious life.

She entered the Sisters Servants of the Immaculate Heart of Mary in 1952 and received her religious habit and religious name, Sister Miriam Dennis, in 1952. She pronounced her first vows in 1954.

During the course of her teaching ministry, from 1954 through 1986, she touched thousands of children and their families. Assignments included St. Mary of the Assumption, Phoenixville; Holy Trinity, Morrisville; Blessed Virgin Mary, Darby; St. Pius X, Broomall; Most Blessed Sacrament, Philadelphia, Immaculate Conception, St. Agatha, St. Clement, Annunciation and St. Francis Xavier, all in Philadelphia; and lastly at Immaculate Conception, Levittown.

Sister Miriam Dennis then spent two years at Camilla Hall as service staff personnel. She served in the school office at B.V.M. School in Darby, assisted in both St. Clement Convent and SS. Clement-Irenaeus/School in Philadelphia, was an office assistant at Holy Family School in Harrisburg then served at the congregation’s motherhouse in Immaculata, Villa Maria House of Studies.

She then assisted in both St. Theresa Convent and School in Hellertown, Pa. from 2004 to 2020.

Sister Miriam Dennis then served in the Apostolate of Prayer in Camilla Hall.

She is survived by her loving nieces and nephew and by her I.H.M. congregation. She is predeceased by her parents and her sister, Kathleen Ranieri (Scully).

The funeral Mass was celebrated privately March 5 at Camilla Hall with Father Jerome Tauber as celebrant and assisted by Deacon Gerry Schmidt.