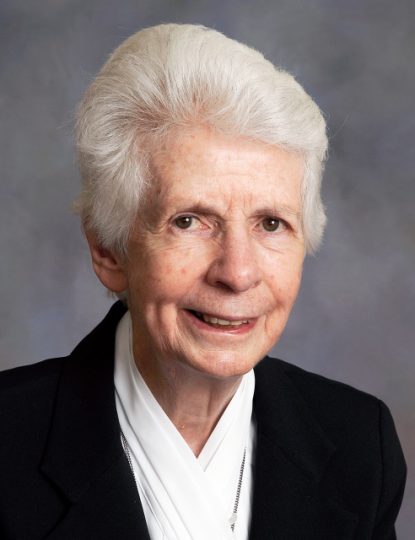 She entered the Sisters Servants of the Immaculate Heart of Mary in 1954, received her religious habit and religious name, Sister Rita Regina, in 1955 and pronounced her first vows in 1957.

Community leadership assigned Sister Rita to Immaculata College in the fall of 1971.

At that time she became a full-time member of the Music Department at Immaculata College. She was named Dean of Students at Immaculata in 1973 and served in that capacity until 1985.

She then taught music in Virginia and in 1988 went to Our Lady of Lourdes Regional High School in Coal Township, Diocese of Allentown, serving as prefect of studies until 1990 then as principal until 2002.

After leaving Lourdes, Sister Rita was development director/alumni relations at Bishop McDevitt High School, Harrisburg for four years until 2003 when she returned to Immaculata University and service as director of planned giving until 2017.

She then entered Camilla Hall and the Apostolate of Prayer and Service.

Sister Rita is survived by brothers and sisters-in-law Joseph (Victoria), John (Joanne), Jerome (Anna Marie), Raymond (Mary Ann) and Olga (James) and her I.H.M. congregation. She is predeceased by her parents and her brother James.