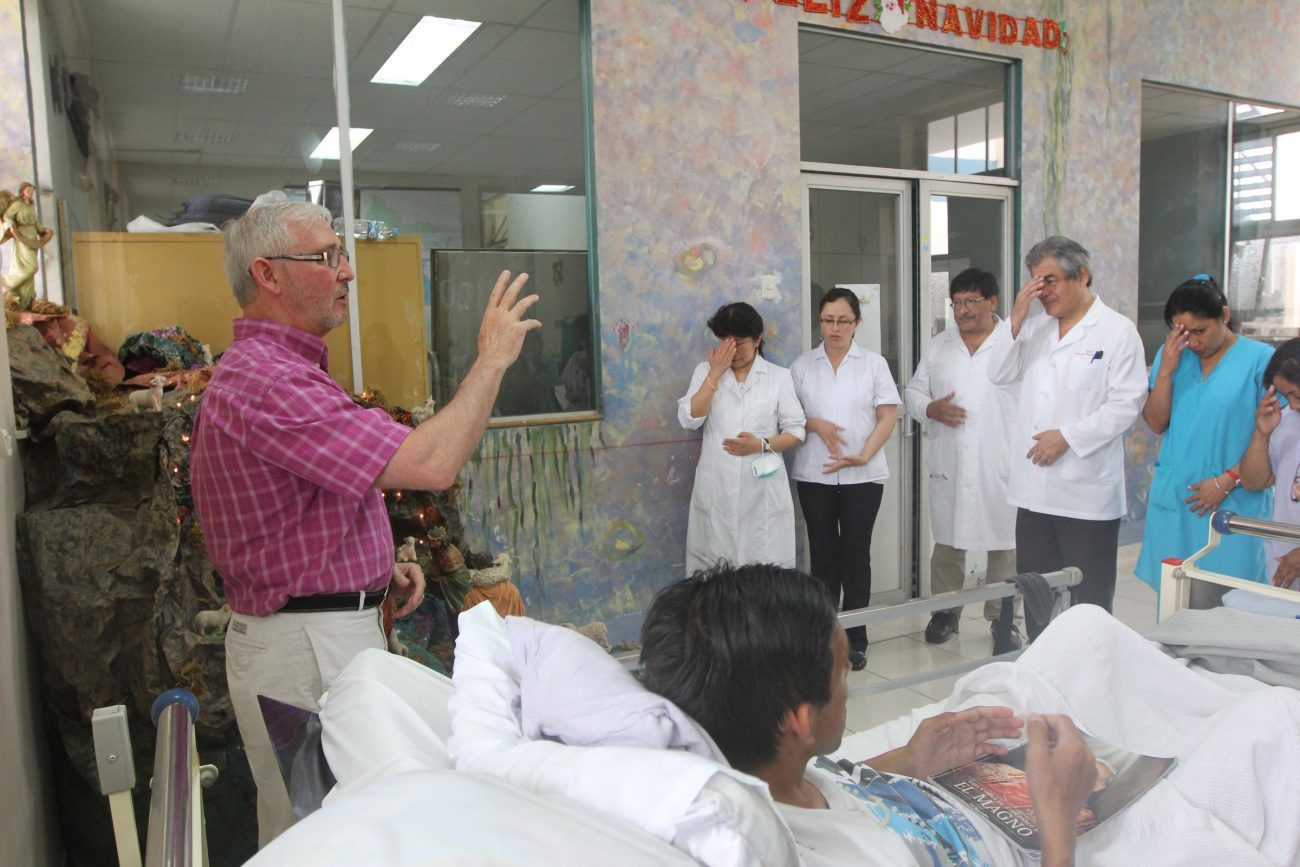 Maryknoll Father Joe Fedora prays with staff and patients in the Santa Rosa infectious diseases ward in Lima's Dos de Mayo Hospital in this 2014 file photo. After a court in Lima ruled that a woman with a terminal illness could end her life, Peru's bishops expressed empathy but opposed euthanasia, an issue that has become prominent in the country's presidential campaign. (CNS photo/Barbara Fraser)

A Superior Court judge in Lima, Peru’s capital, ruled Feb. 25 that the country’s criminal code covering “mercy killings” would not apply in the case of a woman suffering from polymyositis, a degenerative muscular disease.

Ana Estrada, 44, was diagnosed with the disease more than three decades ago. She is no longer mobile; in 2015, she was given a tracheotomy and has been connected to a respirator since. She decided then to look for options for a “dignified death” and in January presented her case before the court.

The judge’s decision in her favor, however, quickly went beyond Estrada’s immediate case, with presidential candidates, civil society groups and the bishops’ conference laying out their positions.

Euthanasia has suddenly become part of a trio of issues, along with marriage equality and reproductive rights, provoking heated debate with weeks to go before the April 11 elections.

“We must remember that euthanasia will always be the wrong path, because it goes against the inalienable right to life, causes the direct death of a human being and, as a result, is an intrinsically evil act,” read the bishops’ statement.

Several presidential candidates were not as considerate in their opposition. Rafael López Aliaga of the conservative Popular Renewal Party said the state should not be involved and if someone wants to die, they should “go to the top of a building and jump.”

He has a different opinion about abortion, including in the case of rape. He said the state cannot allow abortion under any circumstance and that any girl or woman who opts for an abortion would later “have major mental problems.”

A number of parties, however, have defended the judge’s ruling in Estrada’s case. Congressman Gino Costa of the governing Purple Party submitted legislation in late January that would allow terminally ill patients to request assistance to end their lives.

Costa called the court’s decision in Estrada’s case historic, saying that it made it “even more urgent for the Health Committee in Congress to debate the bill on euthanasia.”

Unlike the court ruling, the legislation submitted by Costa is broader and would require all hospitals to comply if a terminal patient opted for assisted suicide.

If Costa’s bill becomes law, Peru would be following Colombia, the only country in South America that allows euthanasia. Colombia’s Constitutional Court accepted euthanasia in 1997, but it was not used until 2015. A bill is pending in Colombia’s Congress to create the legal framework for euthanasia.

Chile is also working on an assisted suicide law. The lower chamber of Congress approved legislation in December, but it was returned to the Health Committee to iron out changes, including stipulating 18 as the earliest age a patient could request euthanasia. Chile holds elections April 11 for a Constituent Assembly that will write a new constitution. The right to assisted suicide would be written into the new constitution.