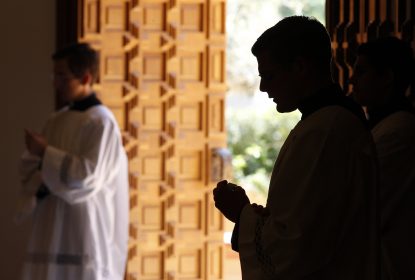 A Legionaries of Christ seminarian is silhouetted as he attends a Mass in the chapel of Regina Apostolorum University in Rome in this June 7, 2013, file photo. The Legionaries of Christ released an updated abuse report, which covers new allegations of sexual abuse reported in 2020 as well as the names of four additional members with substantiated allegations made against them. (CNS photo/Paul Haring)

ROME (CNS) — The Legionaries of Christ received seven new allegations of sexual abuse against members of the congregation in 2020 and released the names of four additional members who ministered in the United States and had substantiated sexual abuse allegations made against them.

The update includes noting that, in 2020, the Legionaries began working with Eshma, an international organization that describes itself as “an independent service for victims of sexual abuse, abuse of power, or abuse of conscience in the Catholic Church.”

The 2020 report said the Legionaries has made “progress” on “a pathway to reparation and institutional reconciliation” with about 50 of the estimated 170 people who were abused as minors by members of the congregation, and it hoped to expand that outreach in 2021.

The 2019 report had said 33 of the 1,353 men ordained as priests of the congregation since its founding in 1941 had been credibly accused or convicted of sexual abuse of minors. The new report revised the number down to 27 after concluding: Two cases might not have involved minors; one was not a case of sexual abuse according to the victim who had reported misconduct; three cases have yet to been verified — “one is under police investigation; the other two, one living and one deceased, are under internal verification.”

Seven new cases were reported to the Legionaries in 2020, the report said. They are not included in the 27 confirmed cases either because the investigations or canonical trials are ongoing or, in one case, because an “external professional third-party” and then a review board, did not find evidence to substantiate the allegation.

In line with the common practice of dioceses and religious orders in the United States, the Legionaries in 2019 published the names of four priests who had ministered in the United States and had substantiated allegations of sexual abuse made against them.

The 2020 report adds four names: Jeremiah Michael Spillane, who left the congregation in 1998; Oscar Juan Turrión Pablos, who left the Legionaries of Christ and the priesthood in 2017; David Consoli, who worked at a Legionaries’ school in New Hampshire in the mid-1990s but left the congregation before ordination; and Father Timothy Meehan, who admitted to having a sexual relationship with a person “under 18, but of the age of consent.” Father Meehan is now incardinated and serving as a pastor in the Italian Diocese of Bolzano-Bressanone.

The report also said that 16 priests who committed abuse remain in the Legionaries of Christ; 15 of them “do not have public priestly ministry,” while one “has restricted ministry which excludes ministry with minors.” All of the cases, the report said, had been “submitted to the Congregation for the Doctrine of the Faith.”

The Legionaries of Christ were founded in Mexico by Father Marcial Maciel Degollado, against whom allegations of sexual abuse and misconduct were raised frequently for decades — going back at least to 1954. However, it was not until 2010 that the Vatican announced its findings that Father Maciel, who died in 2008, had been guilty of “seriously and objectively immoral behavior” and “real crimes.”

Pope Benedict XVI appointed a cardinal as pontifical delegate to the Legionaries in 2010 and the congregation began a process of institutional reform and changes to adopt measures to ensure the protection of children and to responsibly handle allegations of abuse against members.

NEXT: Australian urges ‘deep breath’ after creation of artificial embryos