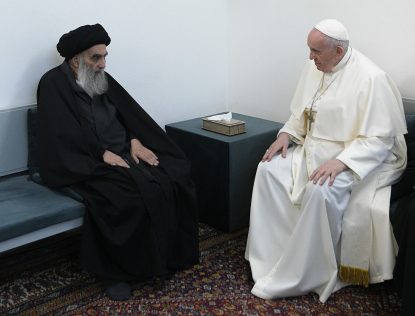 The 90-year-old ayatollah, who turns down most meeting requests, issued a statement after his encounter in Najaf with the pope March 6, saying that world religious leaders should work to hold “great powers” to account, calling upon them “to give priority to reason and wisdom, to reject the language of war, and not to expand concern for their self-interests over the rights of people to live in freedom and dignity.”

Pope Francis “underlined the importance of collaboration and friendship among religious communities so that, cultivating mutual respect and dialogue, they can contribute to the good of Iraq, the region and all humanity,” the Vatican said in a statement.

The meeting, the Vatican said, also gave the pope a chance to thank the ayatollah and the Iraqi Shiite community, which “raised their voices in defense of the weakest and the persecuted, affirming the sacredness of human life and the importance of the unity of the Iraqi people” when Islamic State militants were on a rampage from 2014 to 2017. 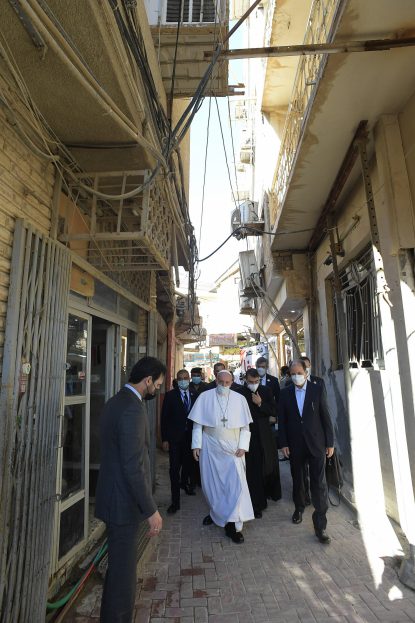 In Iraq — like in Iran, Bahrain and Azerbaijan — more than 60% of Muslims are Shiite. Worldwide, though, Shiites are a minority, making up less than 15% of the Muslim community. Most Muslims are Sunni. The two communities, which share the fundamental beliefs of Islam, separated early in the religion’s history in a dispute over who should lead the community after the death of Muhammad.

For the Shiites, the obvious choice was Ali, Muhammad’s son-in-law, whom they believe was designated by Muhammad.

Imam Ali, as the Shiites refer to him, is buried in Najaf, a sacred city and pilgrimage site for Shiite Muslims. Ayatollah al-Sistani lives near the shrine in a modest home, which is where he met the pope.

As the pope arrived, aides to the Muslim leader released doves in a sign of peace.

Unlike Ayatollah Ali Khamenei, his Iranian counterpart, Ayatollah al-Sistani does not believe his spiritual role should give him a political office, although his speeches and judgments often have political ramifications. During the offensive of the Islamic State militants, he urged Muslims — both Shiite and Sunni — to join forces to defeat them, and he has supported the rights of members of minority groups and religions to live in peace in the country.

Observers saw the pope’s meeting with the ayatollah as a major first step toward creating the kind of understanding Pope Francis has with Sheikh Ahmad el-Tayeb, the grand imam of Al-Azhar, who is an authority recognized by many Sunni Muslims around the world. The pope held a major meeting with the sheikh in Egypt in 2017 and, in February 2019, signed with him a document on human fraternity and interreligious dialogue.

In Pope Francis’ encyclical, “Fratelli Tutti, on Fraternity and Social Friendship,” he wrote that he was “encouraged” by his dialogue with the Muslim leader and by their joint statement that “God has created all human beings equal in rights, duties and dignity, and has called them to live together as brothers and sisters.” 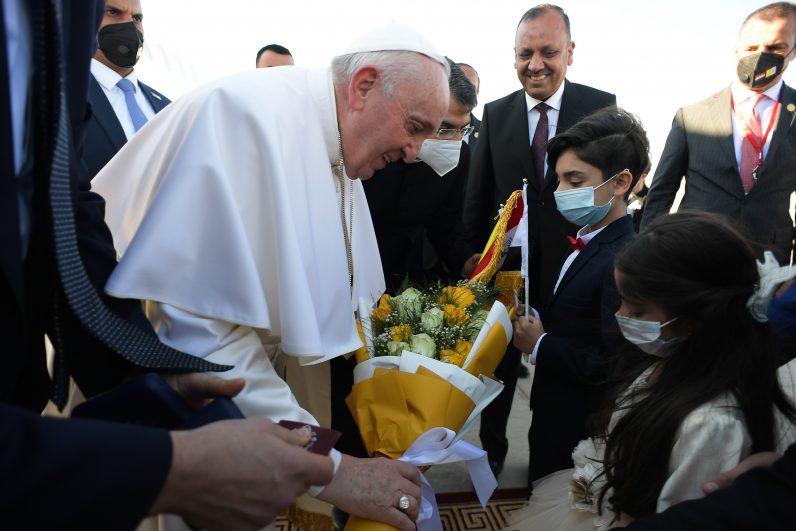 NEXT: Hostility, violence are ‘betrayals’ of religion, pope says in Iraq