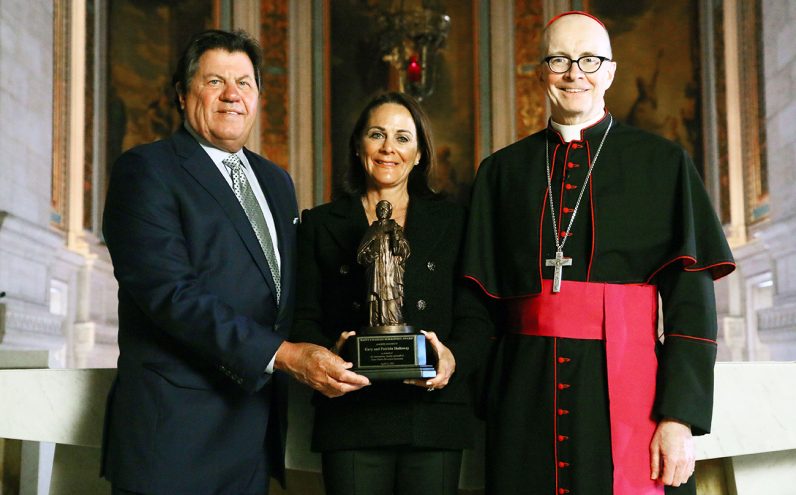 (Watch the full video of the event featuring testimonials from seminarians, leadership and supporters, plus musical selections, here.)

A real estate developer and head of GMH Associates, Gary Holloway said his involvement as an adviser and donor to the seminary for some 40 years, following in the similar role of his father Caswell, has been “a blessing for me to be involved and I have enjoyed every minute of it.”

Patty Holloway is chair of the Paoli Memorial Hospital Foundation and works as a community volunteer. She noted the “passion and commitment” of her husband as he worked “countless hours on the phone and meetings” in support of the seminary.

“He has the ability to put things together. He knows his numbers and the word obstacle is not in his vocabulary,” she said, adding “it brings me joy to see him do what he loves.”

Gary Holloway mentioned the relocation of St. Charles Seminary from its longtime home in Wynnewood to a parcel at the Gwynedd Mercy University campus, expected to be complete by 2024. It is a project he and other supporters of the seminary and its administration have worked hard in recent years to accomplish.

“This new seminary that we are going to build is going to be a phenomenal thing for the Archdiocese of Philadelphia and I couldn’t be more proud to be involved,” he said.

The Holloways were a driving force in the creation of the annual St. Charles Seminary Golf Classic, now in its eighth year. With their support the event generates about $450,000 annually and has become the second largest golf outing in the Greater Philadelphia region, according to the seminary.

The couple were named Dame and Knight of the Order of St. Gregory the Great from Pope Francis in 2018 – one of the highest honors bestowed by the pope on lay people.

The Holloways are both products of Villanova University, and have helped expand St. Mary Magdalen School in Media, Delaware County.

They have also been strong supporters of Main Line Health including Paoli Hospital, Bryn Mawr Hospital, Lankenau Hospital, Riddle Hospital and Bryn Mawr Rehab; the Catholic Foundation of Greater Philadelphia; the Archdiocese of Philadelphia; Villanova University; Villa Maria Academy; Malvern Preparatory School; the Augustinian Province of St. Thomas of Villanova; and Amigos de Jesus Orphanage in Honduras and many other charitable endeavors in the region.

They also responded generously to assist residents of the Bahamas after Hurricane Dorian devastated the island nation in 2019.

In his remarks Archbishop Nelson Perez praised the Holloways’ generosity to St. Charles Seminary which “enables us to enrich and expand our educational and formation programs. I am very grateful for your confidence in our work and investment in the future of the church.”

After two seminarians studying for the archdiocese, Randy Kraft and Shane Flanagan, presented the story of their own vocational journey toward priesthood, Bishop Timothy Senior, rector of the seminary, drew parallels between the night’s honorees and the seminary’s patron saint.

“Gary and Patricia Holloway have shown great commitment to enhancing our community and are outstanding examples of servant leadership,” he said. “Like St. Charles Borromeo, who lived a life of service and humility, the Holloways embody these same qualities in their own lives.”

Thanks to the Holloways and their friends and family, “the future of the seminary looks bright as we enter into a new chapter in our long history, in our service to the church and the entire community,” Bishop Senior said.