In Timor-Leste, the nation also known as East Timor in Southeast Asia, the Franciscan Sisters of the Sacred Heart asked the Papal Foundation to build a dormitory for female students. Because many of the 280 students live in distant places and mountainous areas of the country, the dormitory ensures they no longer need to walk long distances to school, and can focus on their studies and making friends. In the words of Sister Paula S. Gustavo, S.F.S.C., the foundation has “made possible the dreams of these children to go to school while living in a safe and healthy environment.”

The Papal Foundation has given $9.2 million in grants for 122 projects in 64 countries to support the growth of the Catholic Church and help people in need in developing nations.

The international fundraising organization began in 1990 in the Philadelphia Archdiocese, and since that time it has provided $176.9 million in grants and scholarships to build the church, educate and prepare leaders, and care for the most vulnerable people around the world.

Today it is based in Chester where it continues to serve the pope and the magisterium through the faith, energy and financial resources of donors.

“The Holy Father has identified urgencies throughout the world, and the Papal Foundation is committed to working diligently to address his priorities to house, educate, heal and feed individuals in need,” said Boston Cardinal Sean O’Malley, chairman of foundation’s board of trustees.

“In addition to providing for these basic human needs, the Papal Foundation is helping create the physical infrastructure to allow the faithful to receive the sacraments and practice their Catholic faith.”

Among the funded initiatives announced April 21 are:

The Papal Foundation’s work aligns with Pope Francis’ recent visit to the Middle East. He called on all Catholics to rebuild Catholic buildings and care for the residents to help develop a unified Christian community in the Middle East.

The foundation is doing just that, said board president Eustace Mita, as it funds “projects and initiatives that support the Catholic Church’s presence in the Middle East and mission to educate children, offer vocational support for adults and provide for medical needs in these countries.”

“We need to rebuild these buildings that are physical manifestations of our faith, but it is much more than that,” Mita said. “By responding to the Holy See’s requests, we are doing our small part to build the bonds of community Pope Francis referenced. We are building connections between the hearts of the faithful and our Lord Jesus Christ.”

For more information about the Papal Foundation and its grants, visit ThePapalFoundation.org. 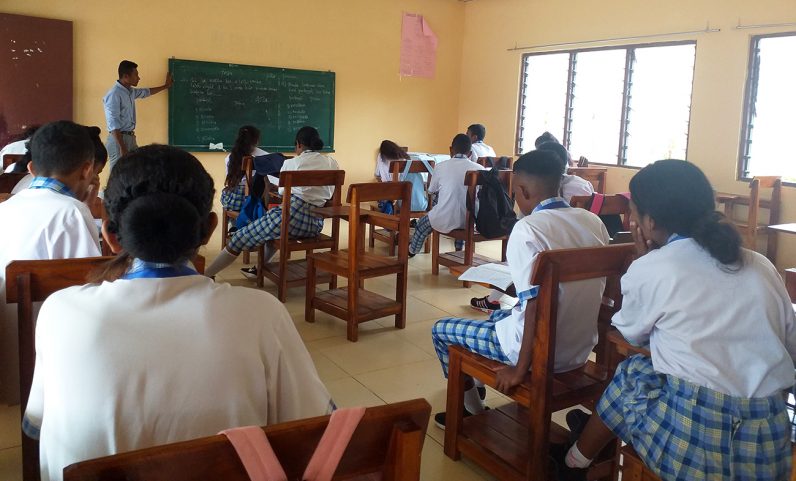 A Catholic school in predominantly Christian Timor-Leste educates boys and girls, thanks to support from the Papal Foundation, based in Chester.

PREVIOUS: Gary and Patricia Holloway honored for service to seminary