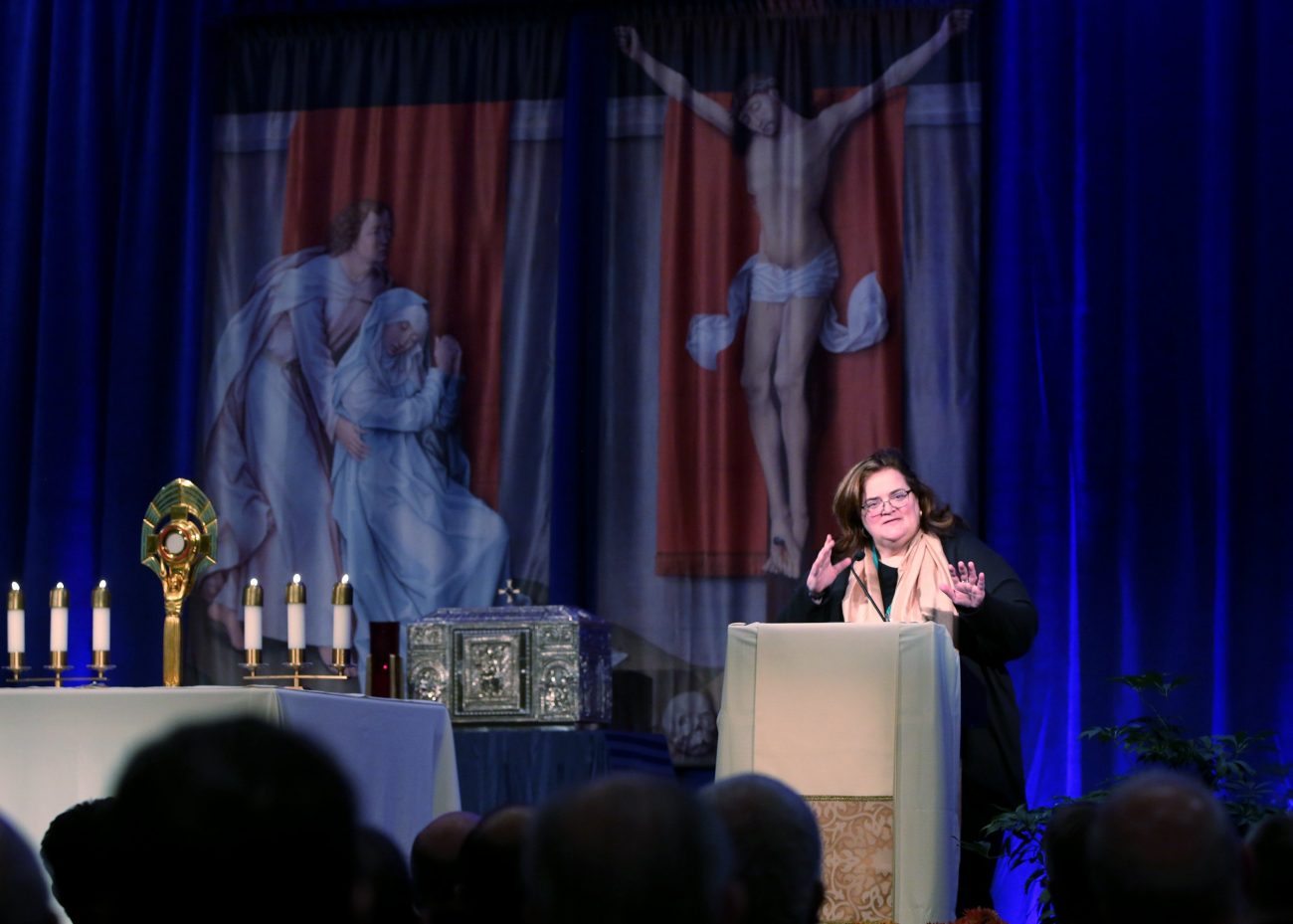 JEFFERSON CITY, Mo. (CNS) — Teresa Pitt Green, who as a child was sexually abused by Catholic priests, said she is convinced “there’s a lot more hope than people dare to feel.”

“If I can turn all the suffering and darkness of my life into a testimony that even in that place, Jesus was there and Jesus heals me, then that’s not such a bad way to use having been abused,” she said.

Pitt Green is co-founder of Spirit Fire, a Christian restorative justice initiative and fellowship of survivors of abuse in the church.

People associated with Spirit Fire find healing by integrating their therapies with their efforts to grow in their relationship with God. They share wisdom, experience and faith with others seeking healing, growth and reconciliation.

They work with church leaders to deepen pastoral care for survivors, their family members and all Catholics, including priests, deacons, consecrated and religious persons.

“There is simply no darkness where you’re not going to find light,” Pitt Green told The Catholic Missourian, newspaper of the Diocese of Jefferson City. “Not because there’s a lamp, but because of Jesus.”

She and the other Spirit Fire survivors are committed to holding the entire church — hierarchy, clergy and laity — accountable for protecting its most vulnerable people, and for tragic failures to do so in the past.

They also are helping all Catholics — priests, laypeople, victims and bystanders — find healing and reconciliation.

“Even after his resurrection, Jesus still had his wounds,” Pitt Green noted. “We also still have our wounds, but they are different — transformed by the new life that he offers us after his own suffering.” 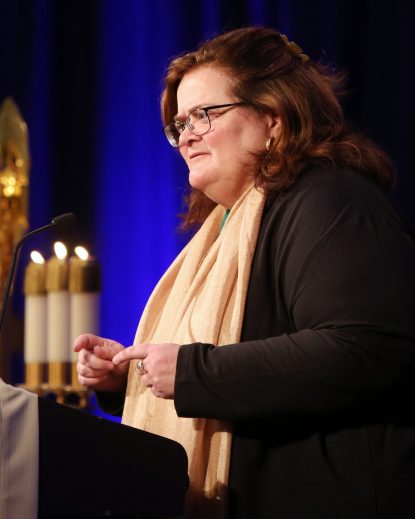 Teresa Pitt Green, an abuse survivor, speaks to bishops during a day of prayer Nov. 12, 2018, at the fall general assembly of the U.S. Conference of Catholic Bishops in Baltimore. (CNS photo/Bob Roller)

Pitt Green grew up in a devout, Irish Catholic family in the Northeast. Her mother started working in the parish rectory when Teresa was 5 or 6. Her father drove 40 miles each day so she could attend a Catholic school.

The family regularly entertained priests as guests in their home. Her parents had no idea the priests they knew and trusted were abusing their daughter.

She wasn’t abused every day, she said, “but once you’re under the spell of being intimidated and dominated, you spend your life in that time between each instance of abuse.”

The trauma affected her physically, emotionally and spiritually. Symptoms of what now is called post-traumatic stress disorder persist to this day.

She left home at 19, losing access to her parents and everyone she knew.

She wandered around New York City, trying various group programs and forms of alternative medicine to make the pain go away.

“I knew I needed a savior,” she noted. “And there’s only one Savior. … Through all those terrible years, at Mass every week, even with my abusers saying (the Mass), I knew the Eucharist was real.”

She would spend “hours in adoration,” she added.

The lingering trauma affected her career. Her health suffered. At 25, still thinking the abuse was her fault, she confessed everything to a priest.

“He would have none of that!” she recalled. “He said, ‘What happened to you is not a sin on your part. Now let’s talk about getting you the help you need.'”

She began the grueling road to healing and eventually reconciled with her family. They worked to create new relationships, she said, “and our lives are now so much richer for our having done that.”

A survivor’s journey is never easy and there’s no set timetable for healing, she said. “Healing, itself, hurts. … I’ve accepted I will always feel the pain I feel. I just have to manage it.”

The Catholic Church’s past failures to protect its most vulnerable members from abuse have shaken people’s faith to the core, but she said, “Just because some bishops and in some cases, laypeople, didn’t have the faith to face down this evil, that doesn’t mean that Jesus didn’t.”

“You can understand pathology, but here, I also understand evil and that it has been vanquished, once and for all,” Pitt Green said. “I stake my whole life that Christ is the victor, and it in some way works out when I’m rejoined with him.”

Referring to the church, she believes “it’s time for the family to heal.”

“There’s great hope — enormous hope — in healing,” she said. “It’s what our whole faith is about!”

That’s why she and Luis Torres, another survivor of abuse, founded Spirit Fire: to help restore what has been broken in themselves, their families, the church and their society.

She and Father Lewis S. Fiorelli of the Oblates of St. Francis de Sales co-wrote “Veronica’s Veil: Spiritual Companionship for Adult Survivors of Child Abuse — A Guide for Integrating Faith with Recovery.”

“We deeply believe that faith and spirituality is part of our healing,” she said, and that “engaging in a constructive dialogue with the church can help bring more pastoral care to survivors who need it and can’t find it.”

She and other Spirit Fire survivors facilitate low-key dialogue, including with members of the Pontifical Commission for the Protection of Minors.

The pandemic has forced many of these gatherings to take place virtually, but they are still God-led and effective, she said. Participants return to their dioceses or curial roles with renewed conviction to help past victims and their families and to prevent any abuse from happening again.

Pitt Green and her Spirit Fire associates help priests learn how to become sensitized to trauma and minister to victims without taking on a therapist’s role.

She serves on numerous diocesan review boards advising local bishops and also works with several programs for priests who have been abusers.

She feels the church has made remarkable progress in how it protects children from abuse and how it helps victim-survivors.

“I can talk to you about ways the church failed at it, but it is really important that people realize that this isn’t just the church. It’s everywhere,” she said.

As chairwoman of the Northern Virginia Human Trafficking Task Force, she said this is a dangerous time in general for children and young people, because they are being lured by technology into abuse and exploitation.

“The threats are much bigger now,” she said. “People need to become aware of child abuse and the signs of it.”

“There’s a lot to be done and a lot of reason to really stay close to our faith,” she said, but she sees reason for hope.

“It’s so incomprehensible that there could be so much hope,” she said. “But it’s there. You just have to walk people through it.”

NEXT: At 108, Dominican sister says God ‘just wants me to hang around’