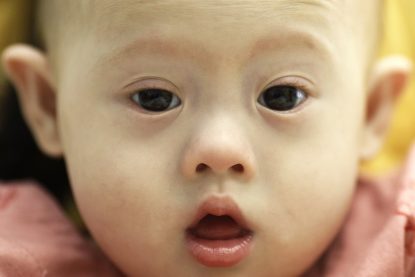 A baby born with Down Syndrome is pictured in a file photo. A federal appeals court has ruled that Ohio’s 2017 law banning abortions after a fetal diagnosis of Down syndrome can be enforced. (CNS photo/Damir Sagolj, Reuters)

CINCINNATI (CNS) — A federal appeals court April 13 upheld a 2017 Ohio law that prohibits doctors from knowingly participating performing an abortion because of a prenatal diagnosis of Down syndrome.

In a 9-7 decision, the U.S. Court of Appeals for the 6th Circuit, based in Cincinnati, overturned an injunction against the state’s Down Syndrome Non-Discrimination Act, saying ruled the law “does not create a substantial obstacle to a woman’s ability to choose or obtain an abortion,” as its opponents contend.

Ohio “has legitimate interests in enacting such a law,” it said.

The 6th Circuit said these interests are threefold: “protecting the Down syndrome community from the stigma it suffers from the practice of Down syndrome-selective abortions; protecting women whose fetuses have Down syndrome from coercion by doctors who espouse and advocate the abortion of all such fetuses; and protecting the integrity and ethics of the medical profession by preventing doctors from enabling such targeted abortions.”

It noted the lower court found “a likelihood that is an impermissible infringement on women’s ‘unfettered right to choose whether to terminate, or continue, a pregnancy previability’ and therefore enjoined the defendants from implementing or enforcing” the law, also known as H.B. 214.

“But as a legal proposition, that claim contains three flaws,” said Circuit Judge Alice Batchelder, who wrote the majority opinion. “One, the right to an abortion, even before viability, is not absolute. Two, viability is not germane to this analysis or decision. And three, the ‘right’ actually implicated or affected here is not the woman’s right merely to obtain an abortion. The plaintiffs cannot succeed on a claim framed in this way.”

Batchelder wrote that even though H.B. 214 “does not prohibit Down syndrome-selective abortions and might not actually reduce the incidence of such abortions, by prohibiting doctors from knowingly participating in this practice, it sends a resounding message condemning the practice of selective abortions.”

Circuit Judge Richard Griffin, who voted with the majority, wrote that “many think that eugenics ended with the horrors of the Holocaust.”

“Unfortunately, it did not. The philosophy and the pure evil that motivated Hitler and Nazi Germany to murder millions of innocent lives continues today,” he said.

After Gov. John Kasich signed H.B. 214 into law, a federal judge blocked it in March 2018 and the case had been in the federal courts since. The full 16-member 6th Circuit heard an appeal of the injunction on the law in March 2020.

In defending the injunction a year ago, an American Civil Liberties Union lawyer argued on behalf of the plaintiffs that the law unconstitutionally sought to take “the ultimate decision” on abortion away from the woman.

Marjorie Dannenfelser, SBA List president, applauded the 6th Circuit for a ruling that “upholds Ohio as a safe haven for unborn babies with Down syndrome.”

“This law includes reasonable, compassionate measures to prevent lethal discrimination in the womb,” she said in an April 13 statement. “We also recognize and celebrate that this legislation has the potential to pose a significant challenge to Roe v. Wade.”

She said the close decision on “the issue of whether states may prohibit the eugenic practice of discrimination abortion, the Supreme Court has even more reason to weigh in on this important matter and declare these laws as constitutional.”

“We encourage the high court to act now that this issue has received further consideration in the lower courts,” Dannenfelser added. “Discriminatory abortions based on sex, race and disability are no less than modern-day eugenics, and must swiftly come to an end.”

NEXT: For true healing, abuse survivors urge church to hear their stories