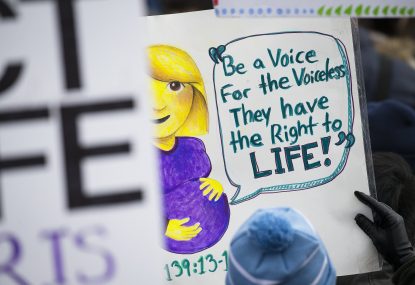 The measures require physicians who perform abortions to be certified in obstetrics and gynecology, place performing an abortion on the list of unprofessional conduct by doctors and prohibit abortions if a fetal heartbeat can be detected.

With the fetal-heartbeat bill, any doctor who performs an abortion after detecting a heartbeat would be guilty of homicide.

“We are fortunate in Oklahoma to have political leaders who understand and seek to protect our most vulnerable from abortion, which claims the lives of unborn children and too often endangers their mothers as well,” said Archbishop Paul S. Coakley of Oklahoma City, in an April 26 statement.

The archbishop called for “prayers for a renewed respect for the dignity of every human life” and for a rejection of the mentality that treats human beings as “disposable based merely on their usefulness, health, age or economic status.”

“We must offer compassion and mercy to those in need,” he added.

Oklahoma also has other anti-abortion bills awaiting the governor’s signature, including one that would immediately outlaw abortion in the state if the U.S. Supreme Court overturns the Roe v. Wade decision that legalized abortion.

Stitt, a Republican, tweeted April 27: “I will continue to keep my promise and sign every piece of pro-life legislation that hits my desk.”

He also said he is “proud to be called the most pro-life governor!”

On April 26, he signed a bill that described Oklahoma as a Second Amendment sanctuary state. The legislation said any law or order demanding the confiscation or surrender of firearms is unconstitutional.