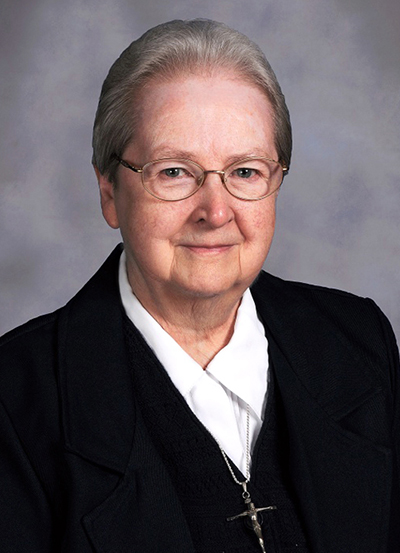 Sister Dolores Ann Dennin, I.H.M., died March 22 in Camilla Hall, Immaculata, at age 90 and in the 73rd year of her religious life.

Mary Catherine Dennin was the daughter of Aloysius Bernard and Anna (Shimp) Dennin of St. Patrick Cathedral Parish in Harrisburg, Pa. She attended the parish’s grade school, followed by Harrisburg Catholic (later named Bishop McDevitt) from which she graduated in 1947.

Mary Catherine entered the Sisters, Servants of the Immaculate Heart of Mary in 1947, received her habit and her religious name, Sister Dolores Ann, in 1948 and pronounced her first vows in 1950.

Shortly after making first vows, Sister Dolores Ann went to St. Matthew School in April 1950 to teach sixth grade children. In 1957 she went to St. Rose of Lima in Eddystone for one month. She then began a long ministry teaching in high schools, including Bishop Kenrick in Norristown, Annunciation in Shenandoah, Archbishop Prendergast in Drexel Hill, Central Catholic in Allentown, and Trinity in Camp Hill, where she taught English from 1979 to 2015.

She cared for her mother in her declining years, then served as a counselor at Holy Spirit Mental Health Clinic as well as in her convent home.

Sister Dolores Ann went to Camilla Hall in August 2015 where she served the community in the Apostolate of Prayer.

In addition to her I.H.M. community, Sister Dolores Ann is survived by her brother Edward Allen Dennin (Deborah), her nephews, nieces, grandnieces and grandnephews. Sister is predeceased by her parents, her brother Francis Xavier and her sister Claire Hensel.

The funeral Mass was celebrated privately March 26 by Father Louis Monica, was the celebrant and homilist.