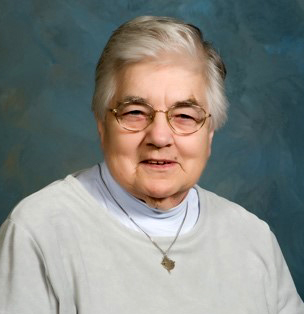 The daughter of the late Stephen and Mary Kratzinger, she attended St. Rose of Lima Grade School and West Philadelphia Catholic High School.

Sister Mary Elizabeth ministered in the Archdiocese of Philadelphia. She was a longtime teacher at archdiocesan high schools as well as St. Charles Borromeo Seminary. In her later years she served at St. Michael the Archangel Parish, Levittown.

The sister of Richard Kratzinger (Sue), John Kratzinger (Holly), Joan Frankowiak (Bernie) and the late Stephen Kratzinger, she is also survived by nieces, nephews, grandnieces and grandnephews and members of her Congregation, the Sisters of St. Joseph.

Services are private but may be livestreamed from the St. Joseph Villa website, www.stjosephvilla.org, on April 8 at 10:30 a.m.

In lieu of flowers, donations may be made in Sister Mary Elizabeth’s name to St. Joseph Villa, 110 W. Wissahickon Ave., Flourtown, PA 19031.

NEXT: Sister Joan Grelis dies, was Sister of St. Joseph for 78 years