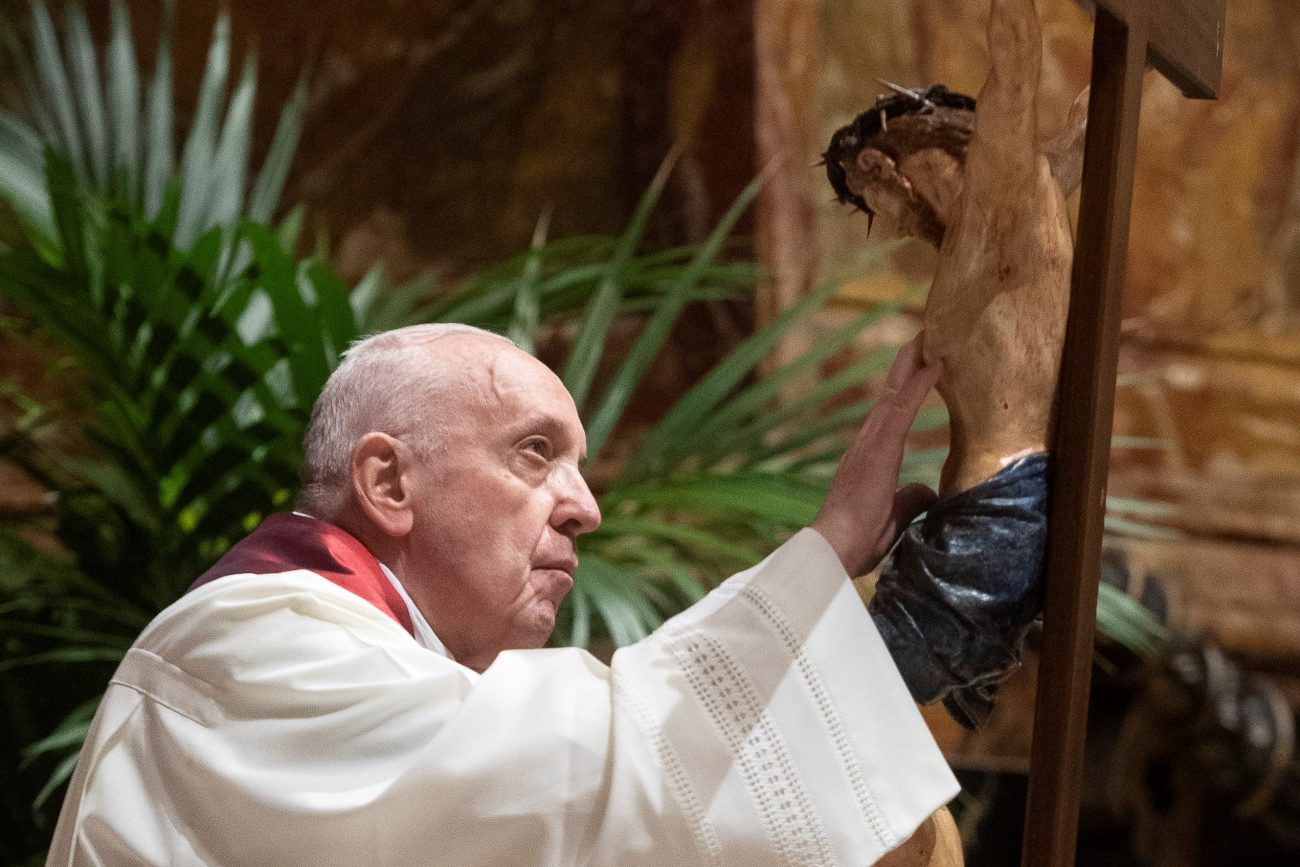 Pope Francis venerates a crucifix as he leads the Good Friday Liturgy of the Lord's Passion April 2, 2020, at the Altar of the Chair in St. Peter's Basilica at the Vatican. (CNS photo/Vatican Media via Reuters)

VATICAN CITY (CNS) — As Pope Francis presided over the Liturgy of the Lord’s Passion, the preacher of the papal household called on bishops and all Catholics to examine their consciences for ways they may be harming the unity of the Catholic Church.

Pope Francis presided over the liturgy April 2 at the Altar of the Chair in St. Peter’s Basilica, but as is customary, the preacher of the papal household, Cardinal Raniero Cantalamessa, gave the homily as the pope and more than two dozen cardinals listened.

“Fraternity among Catholics is wounded,” the cardinal said. “Divisions between churches have torn Christ’s tunic to shreds, and worse still, each shredded strip has been cut up into even smaller snippets.”

With only about 150 people present because of COVID-19 restrictions, Cardinal Cantalamessa clarified that he was speaking “of the human element of it, because no one will ever be able to tear the true tunic of Christ, his mystical body animated by the Holy Spirit. In God’s eyes, the church is ‘one, holy, catholic and apostolic’ and will remain so until the end of the world.”

God’s protection of the Catholic Church, he said, “does not excuse our divisions,” but makes them even more worthy of condemnation and should inspire greater efforts to heal the divisions.

“The most common cause of the bitter divisions among Catholics,” the 86-year-old cardinal said, “is not dogma, nor is it the sacraments and ministries — none of the things that by God’s singular grace we fully and universally preserve.”

Instead, he said, “the divisions that polarize Catholics stem from political options that grow into ideologies taking priority over religious and ecclesial considerations and leading to complete abandonment of the value and the duty of obedience in the church.”

“This is sin in its primal meaning,” said Cardinal Cantalamessa, who was appointed preacher of the papal household in 1980 by St. John Paul II and has served in the role since. 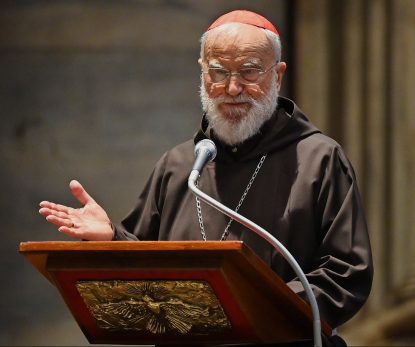 Cardinal Raniero Cantalamessa, preacher of the papal household, delivers the homily as Pope Francis leads the Good Friday Liturgy of the Lord’s Passion April 2, 2020, at the Altar of the Chair in St. Peter’s Basilica at the Vatican. (CNS photo/Andreas Solaro, pool via Reuters)

When support for political candidates, parties or policies are given priority over building up the kingdom of God and the unity of his body, the church, it is time for “a serious examination of conscience” and conversion, he said.

“Fomenting division is the work par excellence of the one whose name is ‘diabolos’ that is, the divider, the enemy who sows weeds, as Jesus referred to him in the parable” in Matthew’s Gospel.

Catholic bishops and priests “need to be the first to make a serious examination of conscience,” the cardinal said. “They need to ask themselves where it is that they are leading their flocks — to their position or Jesus’ position.”

The Catholic Church is called to be a force for the unity of all Christians, he said, and so Catholics must pray and work for the peace and unity Jesus willed for his disciples.

The liturgy began with Pope Francis, assisted by two monsignors, prostrating himself on the floor of the basilica before the altar. Later, after the reading of the Passion according to St. John, the pope also led the adoration of the cross.

Just a few hours after the evening liturgy, the pope was scheduled to preside over the Stations of the Cross in St. Peter’s Square. The meditations for the service were written by children and adolescents and reflect on the crosses many children in the world bear, especially during the coronavirus pandemic. 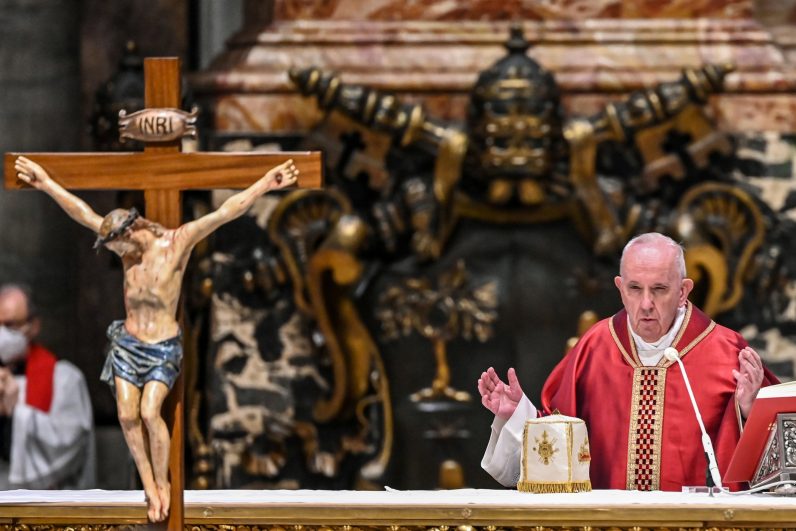 Pope Francis leads the Good Friday Liturgy of the Lord’s Passion April 2, 2020, at the Altar of the Chair in St. Peter’s Basilica at the Vatican. (CNS photo/Andreas Solaro, pool via Reuters)

NEXT: Christ’s victory over death proclaims a second chance for all, pope says