From the lips of children: Pope’s Via Crucis meditations written by kids 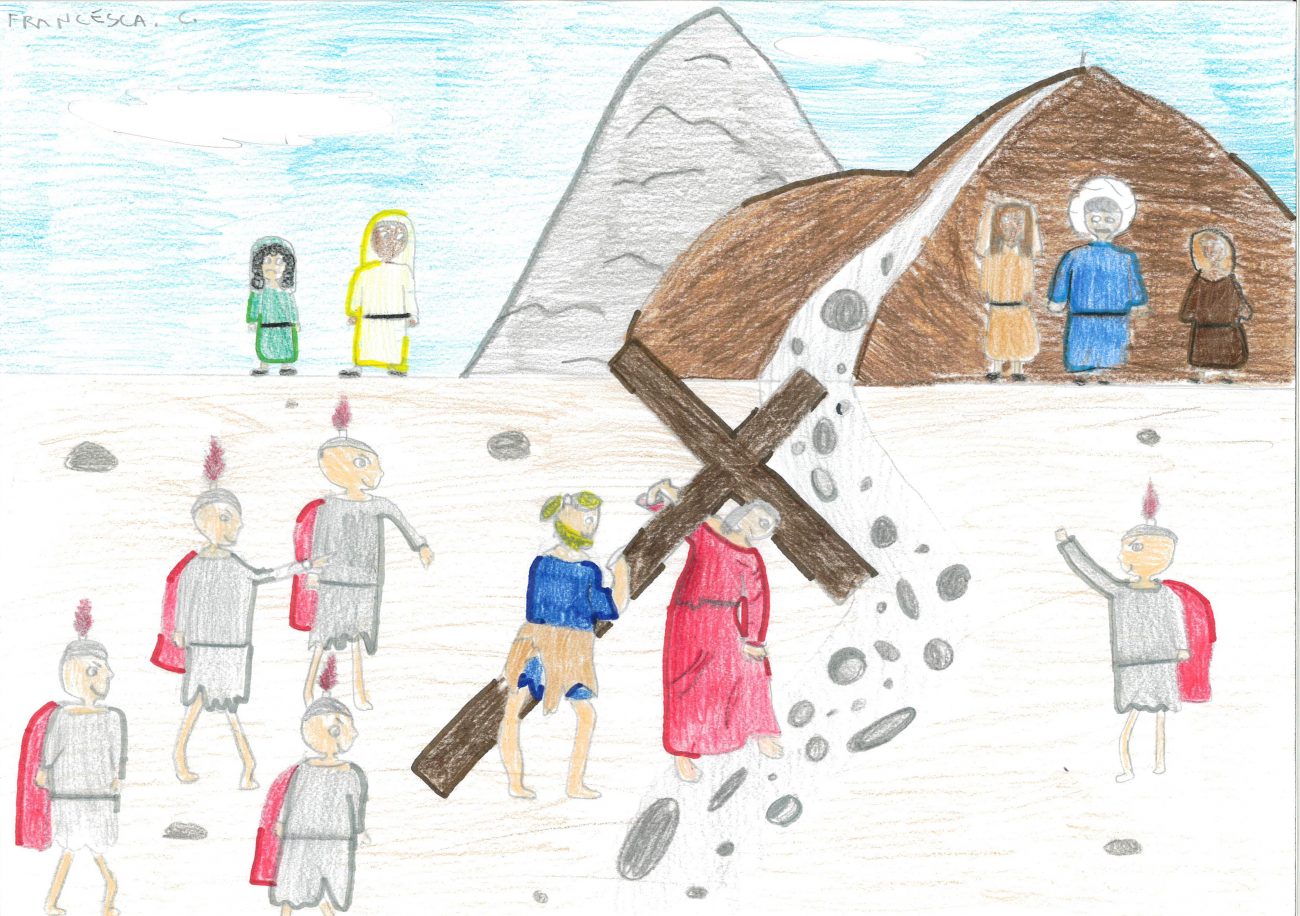 This drawing by a child at an Italian parish helps illustrate a booklet for Pope Francis' April 2, 2021, commemoration of the Way of the Cross. Like last year, the service on Good Friday will be held in St. Peter's Square without the presence of the general public. (CNS photo/Libreria Editrice Vaticana)

VATICAN CITY (CNS) — Knowing that Rome, like all of Italy, would be under varying degrees of lockdown during Holy Week and Easter, Father Luigi D’Errico asked youngsters in his parish to draw illustrations and write a series of reflections on the Way of the Cross.

It was a way to involve the nearly 500 adolescents, who were often stuck at home given all the restrictions against larger gatherings for parish activities and liturgical celebrations, he told Vatican News March 30.

What they didn’t know was that their personal reflections on the crosses they bear and the comfort they find in Jesus would be among those chosen for the Way of the Cross meditations at the Vatican, he said.

“It started as a catechetical activity and then the invitation from the Secretariat of State came to try and help the pope” in contributing to the meditations, commentary and prayers for the late evening ceremony on Good Friday April 2, he said.

Like last year, the Way of the Cross commemoration will be held in St. Peter’s Square without the presence of the public. Fifteen young adults, some of them catechists, will take turns in pairs carrying the cross and a torch. Another 70 young people will be present to represent everyone who contributed to the reflections.

Every year, the pope asks a person or group of people to write the meditations that are read aloud for the 14 Stations during the nighttime ceremony, which he presides over.

This year the pope asked for texts and drawings from a troop of Italian scouts in Umbria, two group homes for disadvantaged young people in Rome and Father D’Errico’s parish of the Holy Martyrs of Uganda, which organizes extensive programs with people who are differently abled and runs shelters for the homeless and women and children survivors of domestic abuse.

Pope Francis chose the voice of young people, Father D’Errico told Vatican News, because, like a father or a mother, he is keenly aware of the many different experiences and challenges facing the whole human family. 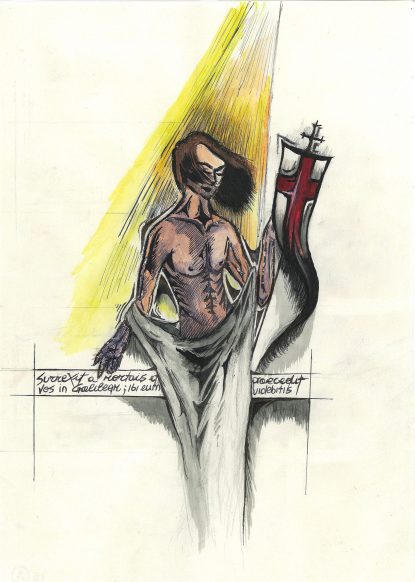 This drawing by a child at an Italian parish helps illustrate a booklet for Pope Francis’ April 2, 2021, commemoration of the Way of the Cross. Like last year, the service on Good Friday will be held in St. Peter’s Square without the presence of the general public. (CNS photo/Libreria Editrice Vaticana)

Even though everyone is suffering because of the pandemic and its impact, he said, young people have not been a priority because they are “the least likely to become infected and die and, therefore, (people believed) we have to worry about them less.”

Instead, the social distancing, the solitude and increased stress on families is very hard on young people, who grow by being with others, he said; so, this special opportunity the pope has given them is a way of “seeking to be by their side.”

The young people were free to choose a station that spoke to them most, the priest said, and many struggled with the incomprehensibility of God letting his son be tortured and killed.

Many of them find a similar kind of anguish and pain in their own lives, he said, as they witness their parents’ struggling, see other families in their parish lose a loved one or be hospitalized for COVID-19 or sacrifice seeing their own grandparents to keep them safe.

For instance, the meditation for the ninth station — Jesus falls for the third time — details not being able to visit grandparents in the past year and how much they miss them, volleyball practice, scouting and even school.

“This miserable feeling of loneliness at times becomes unbearable. We feel ‘abandoned’ by everyone, no longer able even to smile. Like Jesus we find ourselves flat on the ground,” it says, adding a prayer that Jesus shine his light on them when they get lost in dark thoughts.

Many kids at one of the group homes that made the illustrations felt a connection with the scenes when Jesus’ meets his mother and where Jesus receives help from Simon of Cyrene, Fabrizio Gessini, the home’s director, told Vatican News. That helped them reflect on subjects they hadn’t really talked about before.

Mary’s suffering definitely struck a chord with many of the kids, Father D’Errico said, because of the pain they feel when they see their own mothers struggling or in tears. “They understood this profoundly,” he said.

For the fourth station — Jesus meets his mother — the meditation conjures up images of a mother who brings her child to soccer practice, English lessons and catechism classes and who never holds back on a large supply of warm hugs.

“In the evening, even if she is tired, she helps me do my homework. When I have nightmares, she sits with me, calms me down and waits for me to go back to sleep,” it says.

She always listens, and even if the child doesn’t know how to express his or her suffering, “one look is enough. She understands immediately and helps me to work through all my problems,” it says.

For the 11th station — Jesus is nailed to the Cross — the meditation reflects on how a group of scouts gave up spending Christmas with their families so they could serve lunch to those in need.

It seemed like a huge sacrifice to miss opening presents, playing games and eating at home with family, but instead, they received so many smiles, stories and joy from the many people they helped, making that Christmas “unforgettable.”

One young person wrote about seeing his or her grandfather be taken away by medics outfitted like “astronauts” after experiencing difficulty breathing.

“That was the last time I saw my grandfather,” the meditation said. “I prayed for him every day. That way I was able to be there with him during his final journey on this earth.”

Millions of people who follow the ceremony online or on television will be asked to reflect on the crosses young people carry every day.

These crosses may be heavy or light, big or little, but they are real and often it seems like only Jesus knows and takes them seriously.

“Only you know how hard it is for me to learn not to be afraid of the dark and all alone,” to wake up every morning having wet the bed, to speak as well as others, to get math problems right, to hear parents argue, to be made fun of, and to realize how many children are hungry, forced into armed conflict or exploited, says the meditations’ introduction.

Praying to Jesus, who once was a child, too, the introduction asked that he “help us to carry our daily crosses as you carried yours.”

“I thank you, because I know that you are always close to me and that you never abandon me, even when I am most afraid. And thank you too, for sending my guardian angel to light and guard me every day,” it said.

View the livestream of the Via Crucis, with meditations anticipated to be offered in English, here.

NEXT: Pope leads Via Crucis with young people in St. Peter’s Square