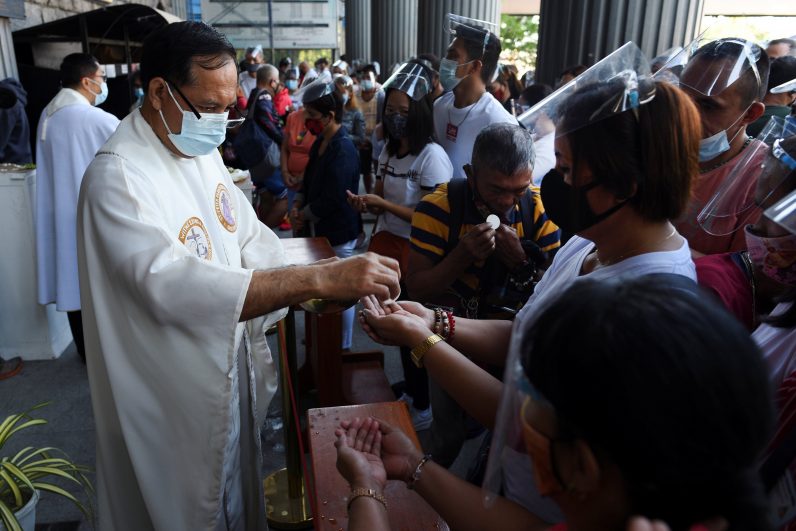 A priest wearing a protective mask distributes Communion during Easter Mass at St. Peter Parish: Shrine of Leaders in Manila, Philippines, April 4, 2021, during the COVID-19 pandemic. Pope Francis delivered a video message to the people of the Philippines as they open a jubilee year to mark the 500th anniversary of the arrival of Christianity in their country. The message was aired April 4. (CNS photo/Lisa Marie David, Reuters)

VATICAN CITY (CNS) — As bishops across the Philippines opened “holy doors” at their cathedrals, Pope Francis sent a video message encouraging Filipino Catholics to celebrate the 500th anniversary of the arrival of Christianity in their country by continuing to be faithful, generous missionaries of the Gospel.

“Be grateful for the gift of faith. Thank God for the people who gave you the faith and for all those to whom you will pass it on in turn. Renew your enthusiasm for evangelization. Reach out to others and bring them the hope and joy of the Gospel,” the pope said in the video, which aired April 4.

The anniversary celebrations kicked off in the Diocese of Maasin March 31 with a liturgy commemorating the quincentennial of the first Easter Mass in the country, which took place on Limasawa Island in Southern Leyte province.

The rest of the dioceses began their celebrations on Easter, April 4, opening holy doors for the jubilee year, which will run until April 22, 2022.

According to the bishops’ conference, the commemoration of the 500th anniversary of the first baptism in the Philippines will be held in Cebu City April 14 with a Mass and renewal of baptismal promises, as well as the baptism of 10 children.

In his message, Pope Francis spoke about Filipino devotion to the Santo Niño, the Holy Child, which goes back to the beginning of Philippine Christianity when explorer Ferdinand Magellan gave a statue of the child Jesus to a local ruler when he was baptized in 1521. 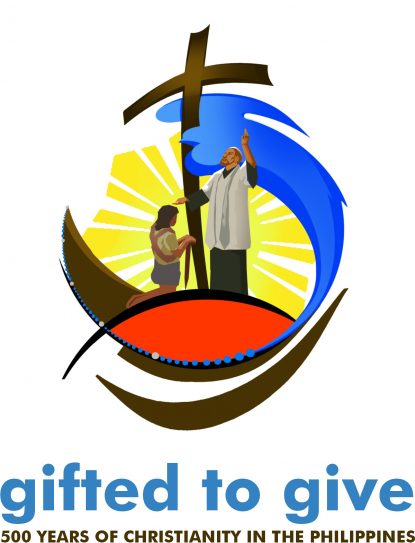 This is the official logo for the jubilee year to mark the 500th anniversary of the arrival of Christianity in the Philippines. (CNS photo/courtesy Catholic Bishops’ Conference of Philippines)

“The tender love of the Holy Child, which is a symbol of the arrival of Christianity in your archipelago, reminds us of the hidden life of the Holy Family in Nazareth,” the pope said. “Mary and Joseph raised the child Jesus with love. By opening the doors of your families to the Holy Child, you, too, will be able to transmit to your children the faith that you received from your parents.”

“Thank you for that deep sense of family, community and fraternity that keeps you firm in faith, joyful in hope and attentive in charity,” the pope said.

But he also noted how “the pilgrim people of God in the Philippines, pastors and faithful, are likewise a people that know what it means to accompany Jesus, the Nazarene, on the way of the cross.”

Preparing for the 2021 jubilee celebrations, he said, Filipinos have dealt with “typhoons, volcanic eruptions and the COVID-19 pandemic. Yet despite all that pain and devastation, you continued to carry the cross and to keep walking.”

“You suffered greatly, but you also got up, time and time again,” Pope Francis said. “Keep working, rebuilding and helping one another” like Simon of Cyrene helped Jesus.

The pope also asked Filipinos to trust in the Holy Spirit and remember that Mary is always nearby, like she was with the disciples on the day of Pentecost.

“After receiving the Spirit, the apostles went out to proclaim the Gospel fearlessly to the ends of the earth,” the pope said. “Mary is always there with all of you. She is the mother who never leaves our side. She has always accompanied you, and now we ask her to intercede for a new Pentecost of the church in the Philippines.”