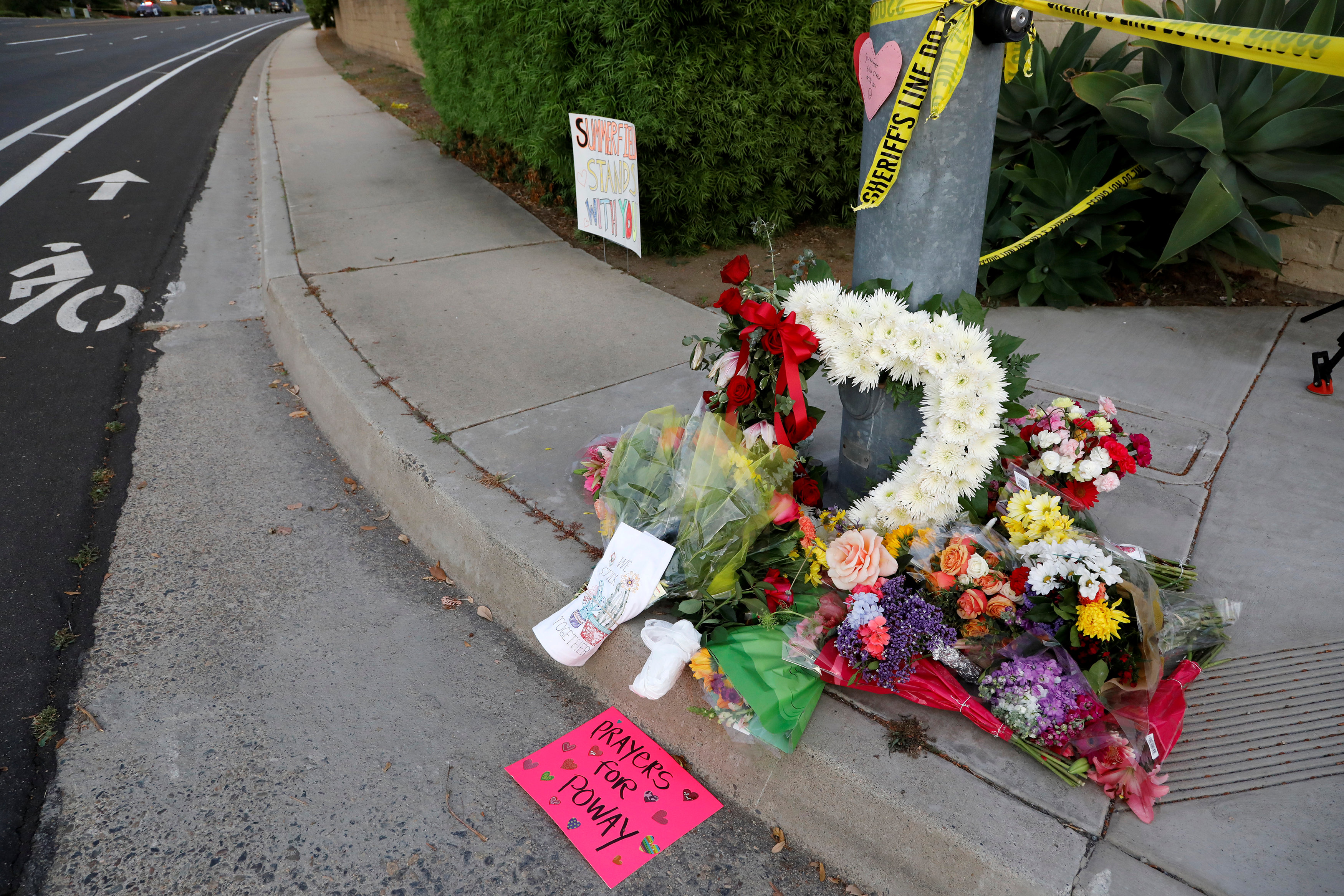 A makeshift memorial is displayed April 27, 2019, near a shooting incident at the Congregation Chabad synagogue in Poway, Calif., near San Diego. Anti-Jewish attacks have risen sharply in the U.S. following May 2021 military conflict between the State of Israel and Hamas. (CNS photo/John Gastaldo, Reuters)

A rise in attacks on Jews throughout the nation should spur Catholics to “call out hatred regardless of the context,” said scholars at St. Joseph’s University in Philadelphia.

“In the face of terrifying instances of antisemitism, including physical assaults, it is especially important for there to be widespread, public denunciations of such hatred,” said Professor Adam Gregerman, co-director of the university’s Institute for Jewish-Catholic Relations (IJCR).

Following the recent military actions between the State of Israel and Hamas, anti-Jewish violence in the U.S. has increased some 75%, according to Jonathan Greenblatt, CEO of the Anti-Defamation League (ADL).

On May 20, the ADL released a report noting what Greenblatt called “a dangerous and drastic surge in anti-Jewish hate right here at home.”

“The issue is not which ‘side’ one supports in the seemingly interminable Israeli-Palestinian conflict,” said IJCR co-director Philip Cunningham. “The question is whether American citizens can go about their daily lives without fear of verbal or physical attack for events beyond their control happening thousands of miles away.”

Two days prior, outdoor diners at a Los Angeles sushi restaurant were kicked and punched by anti-Israel protestors, an assault that was captured on video. The Los Angeles Police Department has arrested two suspects and launched a hate crime investigation in response.

During May 20 clashes between pro-Israel and pro-Palestinian demonstrators in New York City’s Times Square, a 29-year-old Jewish man was brutally beaten by a mob yelling anti-Jewish slurs. Police later arrested one suspect, who now faces hate crime and other charges.

Professors Adam Gregerman (left) and Philip Cunningham (right) of the Institute for Jewish-Catholic Relations and St. Joseph’s University have decried the recent rise in anti-Jewish attacks throughout the U.S., noting that hatred must be “called out regardless of the context.” (CatholicPhilly.com composite photo/St. Joseph’s University.

This week, three Brooklyn men were arrested and charged with perpetrating two separate antisemitic attacks on May 22. In one, the men are said to have shouted “free Palestine; kill all the Jews” at four people outside a synagogue in the Brooklyn’s Borough Park neighborhood, after which they damaged a nearby car. Police said the suspects later attacked two Jewish teens with a baseball bat; one victim was placed in a chokehold.

On Tuesday, an unidentified man affixed several black swastikas with the words “we are everywhere” on the exterior of the Alaska Jewish Museum in Anchorage. Two days later, a swastika and the words “Jews are guilty” were found painted on the walls of the Florida Holocaust Museum in St. Petersburg, Florida.

A week earlier in that state, a Bal Harbour family walking from synagogue services were verbally accosted by a group of men who shouted “free Palestine, die Jew … I’m gonna rape your wife.”

Along with such in-person hostilities, social media has exploded with anti-Jewish rhetoric, said Greenblatt.

Messages praising Hitler and demonizing Jews have been posted across multiple platforms, with more than 17,000 tweets using a variation of the phrase “Hitler was right” uploaded between May 7 and May 14 alone.

“Such displays of bigotry are unacceptable, whether directed at Jews, at Muslims, or at any particular religious or ethnic population in American society,” said Cunningham.

Echoing a recent statement by the U.S. bishops, he added that Catholics “are obligated, among other things, to defend our Jewish neighbors against any manifestations of antisemitism.”

Cunningham pointed to a 2014 interview in which Pope Francis was “utterly candid about the duty of Christians in this matter,” with the pope affirming that “antisemitism is a sin.”

“Our roots are in Judaism,” said Pope Francis in the interview. “In every Christian, there is a Jew; and you cannot be a true Christian if you do not recognize your Jewish roots.”

“It is especially important that there be no social tolerance of such hatred,” said Gregerman. “The perception that American society in general is committed to protecting religious, racial, and other minorities is vital for cultivating a sense of communal solidarity.”

PREVIOUS: Seniors served by archdiocese say they’re ‘more viable and active’ than ever

NEXT: Nine new permanent deacons to be ordained this month