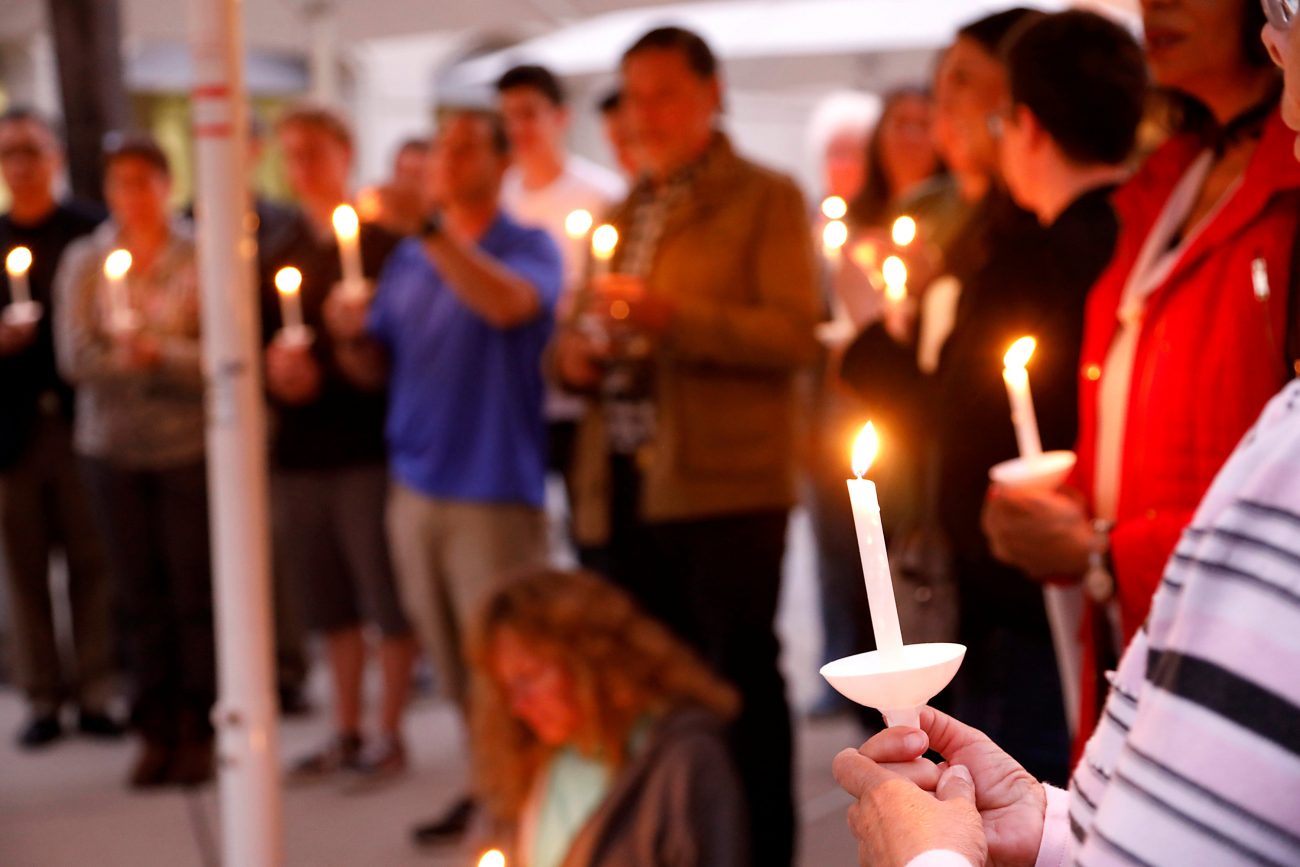 A candlelight vigil is held April 27, 2019, at Rancho Bernardo Community Presbyterian Church for victims of a shooting incident at the Congregation Chabad synagogue in Poway, Calif., near San Diego. (CNS photo/John Gastaldo, Reuters)

WASHINGTON (CNS) — Archbishop José H. Gomez of Los Angeles, president of the U.S. Conference of Catholic Bishops, and the prelate who chairs the USCCB’s Committee on Ecumenical and Interreligious Affairs decried a recent rise in anti-Semitic attacks in the United States as “contrary to who we are called to be as the people of God.”

“We cannot remain silent when we witness our brothers and sisters suffering on account of being Jewish, and we will never tire of our commitment to decry every form of hatred, especially those formed in contempt of faith,” said a May 26 statement by Archbishop Gomez and Bishop David P. Talley of Memphis, Tennessee.

“The recent rise in anti-Semitic attacks across the nation is deeply troubling,” they added. “Any attack on a community or individual on the basis of faith or otherwise is contrary to who we are called to be as the people of God.”

Citing the pope’s 2020 encyclical “Fratelli Tutti,” the two bishops said: “Pope Francis continually reminds us of our duty to build a culture of encounter by building bridges that transcend differences and divisions. In doing so, we must denounce violence unconditionally and take up dialogue.”

Archbishop Gomez and Bishop Talley said, “We remain steadfast in the promise of the Second Vatican Council to decry ‘all hatred, persecutions and manifestations of anti-Semitism directed against the Jews at any time by anyone,'” quoting from the Vatican II document “Nostra Aetate,” the Declaration on the Relationship of the Church to Non-Christian Religions.

“This is integral to the irrevocable friendship we have cultivated and continue to build with our Jewish brothers and sisters,” they said.

The attacks in the United States appear to be tied to the latest round of Israeli-Palestinian violence. Jonathan Greenblatt, CEO of the Anti-Defamation League, told the “PBS NewsHour” May 24 that attacks during the two weeks of the conflict were up 63% over the two weeks prior. The attacks include harassment, physical violence, vandalism and hate speech on social media.

NBC News reported May 21 that some U.S. mosques also have been vandalized during the Middle East fighting.

“Our prayers are with those who have been harmed,” said Archbishop Gomez and Bishop Talley. “May all people of goodwill unite in fostering a culture that rejects all forms of hatred, most especially antisemitism.”

PREVIOUS: California bishop prays for victims of another ‘senseless’ shooting

NEXT: At urging of U.S. bishops, Catholic leaders to meet on immigration