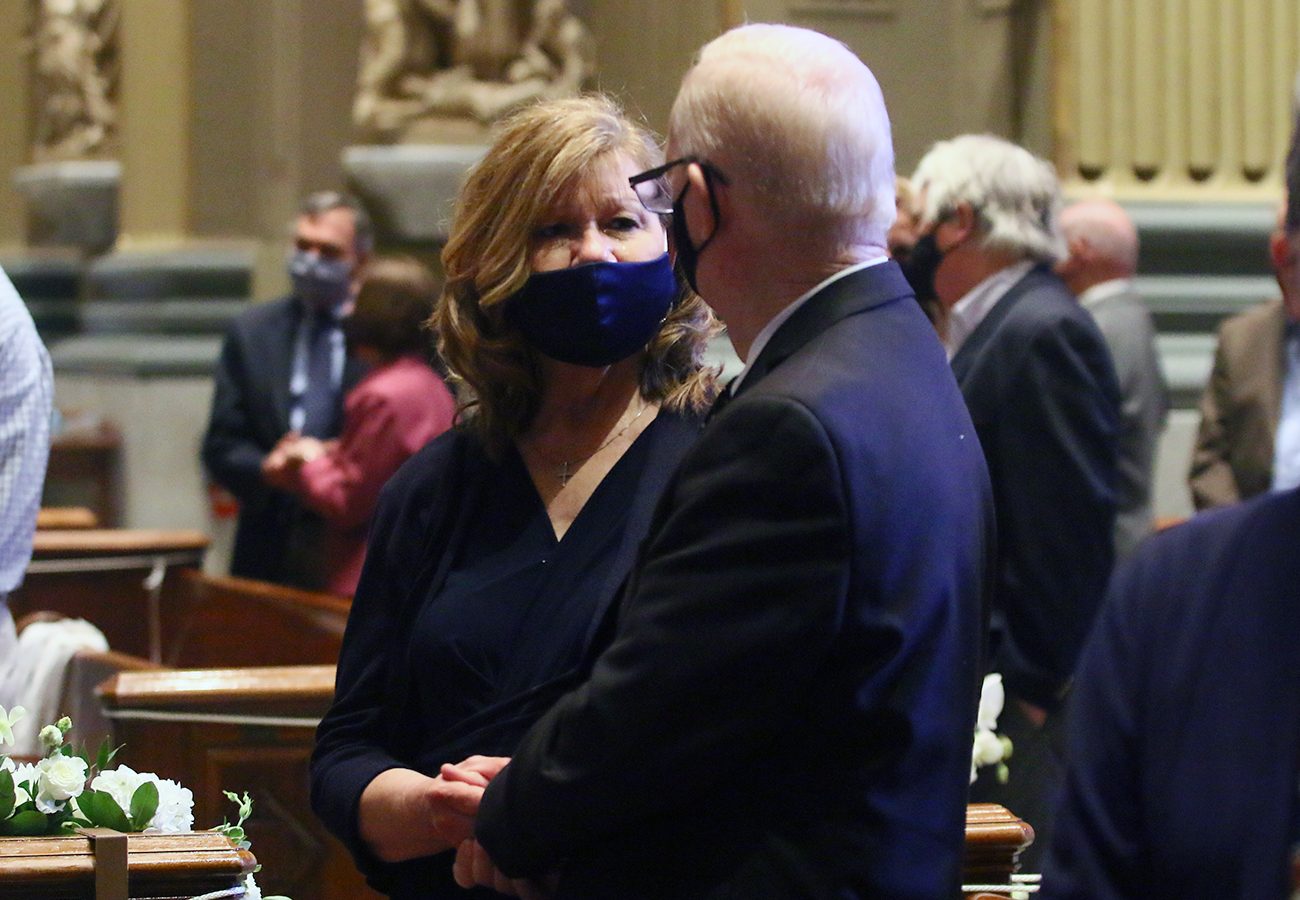 A married couple faces each other during a blessing at the May 1 wedding anniversary Mass celebrated by Archbishop Nelson Pérez at the Cathedral Basilica of SS. Peter and Paul. (Sarah Webb)

Some 120 married couples marked their milestone wedding anniversaries during a May 1 vigil Mass celebrated by Archbishop Nelson Pérez at the Cathedral Basilica of SS. Peter and Paul.

The annual liturgy has been a tradition for at least 30 years, said Steven Bozza, director of the archdiocesan Office for Life and Family, which sponsored the gathering.

(View a photo gallery from the annual wedding anniversary Mass.)

Reflecting on the Sunday Gospel (Jn 15:1-8), in which Jesus describes himself as the vine and his disciples as the branches, Archbishop Pérez said the couples present “understood that (their) connection with Christ was essential” to their marriages.

The archbishop reiterated the words of Christ in the day’s Gospel passage, “without me you can do nothing” (Jn 15:5).

Catholics are sustained by the sacraments, which provide a life-giving bond with the divine, and serve as “powerful signs of (Jesus’) invisible reality,” said Archbishop Pérez. “How beautiful is … this interconnection between the soul of Christ and us.”

The archbishop quoted Pope Francis, who in his 2016 apostolic exhortation “Amoris Laetitia” wrote marriage represents “a deeper love” beyond “any emotion, feeling or state of mind,” one that is in reality “a lifelong decision of the heart” (Amoris Laetitia, no. 163).

And amid ups and downs, said Archbishop Pérez, husbands and wives can “look at who (they) are today” and reflect on the fruits of their shared lives. 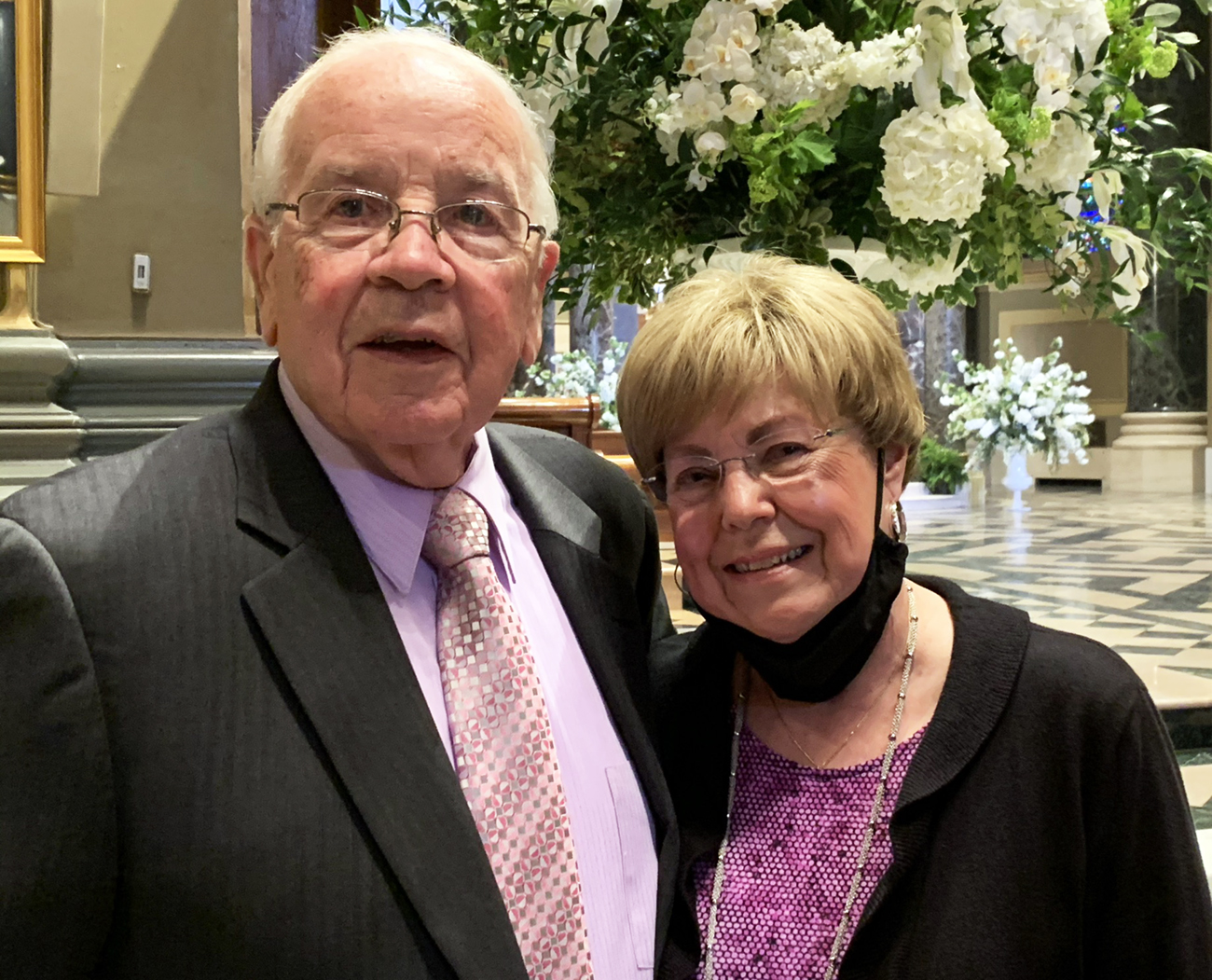 Thomas and Dolores Connell of St. William, seen after the May 1 wedding anniversary Mass at the Cathedral Basilica of SS. Peter and Paul, said faith, loyalty and a sense of humor have been key to their six-decade marriage. (Gina Christian)

Noting that the cathedral had hosted a wedding just prior to the vigil Mass, the archbishop invited the couples — whose collective years of marriage totaled more than 3,400 — to consider what advice they might give the newlyweds.

Bozza and his wife Janice, who observed their 35th anniversary last month, had ready answers.

“Never go to bed mad,” said Janice, while Steve added, “Never hang up on one another. And don’t be a button-pusher.”

With six decades of marriage to their credit, Thomas and Dolores Connell of St. William Parish in Philadelphia stressed the importance of loyalty and honesty.

“You also need a sense of humor to be together this long,” said Dolores.

Faith has been vital to their union, both said.

“It really helped us through,” said Tom.

“Through all of our trials, God was our leader and our savior,” said Dolores.

Married just shy of a year, Rhady and David Taveras say they have changed profoundly since they walked down the aisle last May.

Conflict resolution has also evolved on the other side of “I do,” said Rhady, a coordinator and manager for Spoken Bride, a digital ministry for engaged and newly married Catholic couples.

“Any time there are any disagreements, or any time we’ve wronged each other, we center it back in God,” she said. “After apologizing and talking about how we’re going to move forward, we always bring it to prayer and say we love each other. It’s just such a beautiful way to remind ourselves that without (God), we can’t get through this.”

The struggles are well worth it, said the Connells.

“I would do it all over again, with the same woman,” said Thomas – to which Dolores replied, “And I would too.” 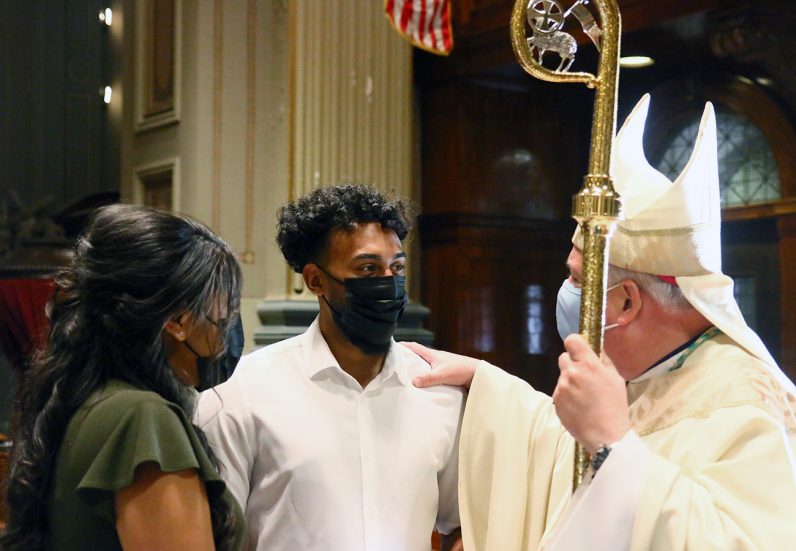 Rhady and David Taveras, married last May, speak with Archbishop Nelson Pérez after the May 1 wedding anniversary Mass at the Cathedral Basilica of SS. Peter and Paul. (Sarah Webb)

PREVIOUS: Transitional deacons to be ordained for Philadelphia this Saturday